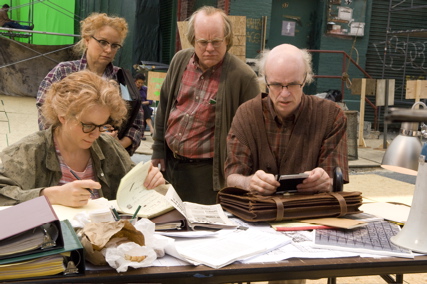 To call Synecdoche, New York a masterpiece is to aggrandize it in ways that ignore its intrinsic weaknesses, and yet it’s the only word I can think of to describe this grand cinematic enterprise. There needs to be a word for the kind of film Synecdoche is, a word that encompasses the vast depths of its creator Charlie Kaufman’s imagination and acknowledges the mess that accumulates from digging so deep. But for all its messy, meandering, sometimes too indulgently clever twists and turns, Synecdoche is a work of profound self-analysis, a mind-blowing journey into the complicated inner workings of human consciousness. In that sense, it truly is a masterpiece.

Charlie Kaufman is a genius, but his interest in human nature is so all-encompassing that it tends to fly apart in such a vast expanse. Synecdoche is all over the map. It’s like the work of a madman who is so hyper aware of the world he lives in that the tiny truths ring just as loudly as the big ones. But that is also his advantage—Charlie Kaufman can hear it all. It’s the difference between him and everybody else. His mind doesn’t edit out anything. He doesn’t suppress his nightmarish neurotic impulses—instead, they are the source of his creativity. Kaufman’s subconscious fears and anxieties are just like everybody else’s, just closer to the surface.

In fact, that is one of the brilliant aspects of Kaufman’s writing—it speaks to us all. When I watched Synecdoche, I felt like he had found a portal to my own brain. The film portrayed thoughts and feelings that only I thought I had, stuff of the imagination when it drifts unheeded—thoughts like occasionally fantasizing about your husband being dead so you can start all over without guilt, or nudging the bulging veins in your arm and wondering if they’re bulging more than usual, or even if bulging veins are cause for concern. Or thoughts about how I often feel like I’m outside of myself, watching myself be myself, or how I watch other people, imagining I am them. Or how I often feel asexual, like I did as a prepubescent child, or that I should have been born the opposite sex.

The dual issues of identity and reality (who am I, and what is real?) are not the only themes explored in Synecdoche. In fact, all the themes are propelled by the impulse and influence of one theme—the disquietude of middle age. Kaufman was in his mid-forties when he wrote the film, and Caden Cotard (Philip Seymour Hoffman), his alter ego and the film’s protagonist, is the same age. It’s a time when we see signs of the body beginning its slow descent, and we reassess what we’ve accomplished in our lives thus far. We also begin to feel as if time is compressing. Years pass as quickly as months did in our youth, and death feels more palpable, and less like something that happens to other people. Mid-life is no picnic, and the film, teeming with metaphors, immediately opens with one about that stage of life—a poem about autumn, “the beginning of the end.”

As mid-life crises go, Caden Cotard’s is one of epic proportions. A theater director, he realizes his creative work is at a dead end at best, at worst only a mediocre achievement within the narrow parameters of the regional theater company he runs in Schenectady, New York. (Among other things, the film’s title is a pun of the town’s complicated-sounding name.) Caden’s personal life is in no better shape. His wife, Adele (Catherine Keener) spends more time with her best friend (Jennifer Jason Leigh) and her own creative endeavors (she’s a painter) than with Caden, with whom she always seems exasperated, even contemptuous. To top it off, Caden’s body is suddenly showing signs of disease. His visits to medical specialists seem to be directly proportional to the number of symptoms he develops. Over time (another aspect of reality that Kaufman alters at will), Caden becomes convinced that he is dying, although his psychosomatic tendencies are really manifestations of a metaphysical truth that everybody faces. “We’re all hurtling towards death,” Caden says, and then, “each of us knows that we’re going to die, and each of us is secretly thinking we won’t.” Caden is one of the ones who can’t seem to hide the truth deep enough in his subconscious. It’s closer to the surface, and it’s what drives his artistic impulse.

When Adele leaves Caden for an open-ended stay in Berlin, taking their five-year-old daughter with her, Caden’s despair is complete. Fortunately a windfall arrives in the form of a Macarthur “genius” grant, and he decides to embark on a grand creative project that ends up consuming the rest of his life. He decides to put on a play, “something that is big and true and tough.” Caden’s project is so massive that he decides to take over a warehouse in New York City and hire a large company of actors to help him. The play will be a recreation of his life in Schenectady.

The theater project ends up incorporating everything that’s swirling around in Caden’s mind—his anxieties over his physical ailments, his humiliation over his wife finding a better life away from him, his desire for consolation through romance. The play in fact becomes his life, or his life becomes the play. Somewhere along the line, the fourth wall disappears and neither the audience nor Caden seems to be able to know where the play ends and Caden’s life begins. Caden fills his play with actors who stand in for the people in his life, and they, in turn, become a part of his life as well as his play. A young protégé, Claire (Michelle Williams), is cast as Adele, and then becomes Caden’s wife in “reality.” Caden’s assistant, and sometime romantic interest, Hazel (Samantha Norton), eventually gets her own character in the play (Emily Watson, whose resemblance to Ms. Norton is eerily close), and even a ghostly specter (Tom Noonan) is hired to stand in for Caden himself. The interspersing of characters and their representations makes for some bizarre and hilarious situations, but its main service is to the constant question, “Who am I?”

As the play consumes Caden, reality becomes more and more fragmented. By the film’s end, it seems as if everything is inverted, and what Kaufman reveals to us is something amazing, complicated and very beautiful. After all his endeavor to distinguish himself through his art, Caden ends up in the role a minor character in his play, the cleaning woman Ellen. He’s replacing the actress Millicent Weems (Dianne Wiest) who has been chosen to play him. Everyone is everyone. As Millicent/Ellen/Caden says to Caden/Ellen/Millicent: “You are Claire, Adele, Ellen….” The literal and the metaphorical have become one. The idea that we are all connected is a comforting thought, and its partial truth becomes, for a seductive second, the whole truth.

Some critics have complained that Synecdoche is a downer of a movie. It’s true that it contains few of the transcendent qualities, or moments of pure joy, that uplifted audiences in Adaptation or Eternal Sunshine of the Spotless Mind. For all its bleakness, however, there is still a lot about Synecdoche that is very, very funny. But its main gift is its relentless pursuit of the truth of existence, in all its complicated, messy, and yes, morbid and sad and disappointing aspects. If you want a film that makes you feel good, go see Beverly Hills Chihuahua. If you want a film that is big and true and tough, go see Synecdoche. And then go see it again, because it’s so rich with ideas that you can’t possibly get them all the first time around.