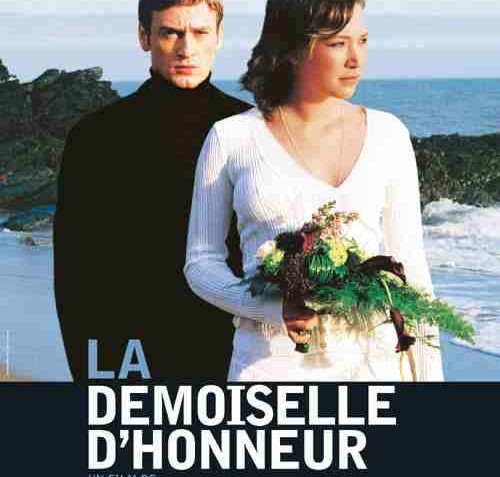 Director Claude Chabrol, now 76, continues to make impeccably crafted movies with the skill and subtlety that only age and experience combined, perhaps, with a touch of genius, provide. His current entry, The Bridesmaid, based on a novel by the prolific British mystery writer, Ruth Rendell, is a mesmerizing story of a young man’s obsession with a psychopathic woman.

Philippe Tardieu (Benoit Magimel) is a wholesome young man, living in a middle-class suburb with his mother (charming Aurore Clement), a hairdresser, and his two younger sisters, Sophie (Solene Bouton) and the rebellious Patricia (Anna Mihalcea). At Sophie’s wedding, Philippe meets Senta (Laura Smet), a bridesmaid and cousin to the groom. Later that day, Senta shows up at the Tardieu home, soaked from a pouring rain. Only Philippe is home; he invites her in out of the rain and they make love. In the post-coital calm, she declares intensely, "You’re the one I have been waiting for. You’re my destiny. I’m your’s. That’s all."

Of course, that is hardly all there is to it. The two could hardly be more opposite, she with a checkered past of drugs and sex, he the upright guy with a budding career who brings home part of his paycheck to Mom. She says she never lies, yet sometimes appears to be caught in falsehoods. But Chabrol keeps that a shifting, ambiguous question.

Senta, of course, is the name of a character from The Flying Dutchman, the superb Wagner opera, based, in turn, on a tale by Heine. But the parallel is only a suggestion, the suggestion of obsessive love, even to the point of death. As Philippe grows ever more obsessed with Senta, her demands become greater, until she wants "a gesture that places us above ordinary people." To prove their love, she wants each of them to kill a total stranger. "We’re above everything–laws, morality," she declares. With mounting tension, Chabrol follows the unwinding of his tale which develops the inevitability of a Greek tragedy.

Chabrol has been called the "French Hitchcock," and there is some validity to the comparison. In particular, both directors deliver powerfully constructed narrative–clear storylines, told in sophisticated filmic terms without gimmicks. But Chabrol tilts more in a direction away from the importance of plot and heavily emphasizes character. He deliberately uses ambiguity which draws the viewer into considering the psychological complexities of the characters and he never patronizes his audience by spelling out and laboring the obvious. In The Bridesmaid, he’s in top form.