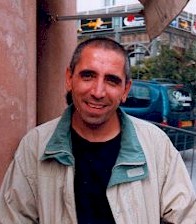 At the forefront of Iranian cinema stand two names, Abbas Kiarostami and Mohsen Makhmalbaf. If Kiarostami has gotten greater Western acclaim owing to the more intellectual bent of his films, Makhmalbaf can be comfortable in the fact that virtually his entire family are now the darlings of international cinema. Directed by wife Marzieh Meshkini and co-written by Mohsen, The Day I Became a Woman has enjoyed much acclaim with its recent U.S. release. Older daughter Samira Makhmalbaf (age 21 as of this writing) is already famous with two films, The Apple and Blackboards, again both co-written by Mohsen.

Facets Video has just released six of Mohsen Makhmalbaf&#146;s early features &#150; Boycott, The Peddler, The Cyclist, Marriage of the Blessed, Once Upon A Time, Cinema, and The Actor &#150; as well as a documentary on him by Houshang Golmakani, editor of the Iranian film journal Film Monthly. The most remarkable revelation in these films is just how much Makhmalbaf developed from a rough student of Hollywood-influenced movies into a masterful composer with his own personal style and tone. In all his films however, the subject matter is clearly close to his heart and deals with deeply ingrained personal experience.

As Golmakani&#146;s documentary Stardust Stricken, Mohsen Makhmalbaf: A Portrait (1996) shows, that experience is extraordinary. Makhmalbaf was born in Tehran in 1957, and Golmakani shows him visiting his old home where Makhmalbaf relates the story of his youth. He was born to his father&#146;s second wife. His father left his first wife because she could not bear him a son and he soon deserted his second wife as well during Makhmalbaf&#146;s early childhood. His mother took him to live with his aunt and grandmother, and she remarried, this time to a lawyer. Makhmalbaf attributes discovering religion from his grandmother, learning how to read from his aunt, and gaining political awareness from his stepfather. Makhmalbaf became such a stern fundamentalist that due to the religious intolerance of music at the time, he would cover his ears when passing music stores.

He was politically active and militant, distributing leaflets and putting on plays against the Shah’s regime. The central event in his youth proved to be his attempt to steal a gun from a policeman when Makhmalbaf was 17. (This was turned into his wonderful masterpiece A Moment of Innocence, aka Bread and Flower). He stabbed the policeman, but failed to get the gun and was shot. Taken into captivity, he was interrogated and intensely tortured. Makhmalbaf utilized this experience in his film Boycott. He remained in prison for 4 years before being released in 1979.

Makhmalbaf&#146;s philosophy has evolved significantly since then. Looking back, he sees himself as naive and now finds the too devoutly political to be Machiavellian. Surprisingly, he takes Albert Einstein as an idol and applies his theory of relativity to the social-political. He says he has stopped judging others and instead tries to understand them. He sees God as an inclusive rather than an exclusive force. His willingness to criticize the state and cultural traditions have made him a controversial figure in Iran, and his collaborations with Marzieh and Samira certainly show a strong concern for the oppression of women and Kurds in Iranian society.

The earliest Makhmalbaf film in this collection is Boycott (1985), which will be a shock to anyone only familiar with the pictures from later in Makhmalbaf&#146;s career. Car chase scenes and gun battles feature prominently in this story about political activist Valeh (Majid Majidi, later the director of The Color of Paradise and The Children of Heaven). Valeh&#146;s wife, Maryam, has just gone into labor when the Shah government forces unleash a full-scale assault on Valeh and his fellow dissidents. Valeh is captured after his colleagues are brutally murdered, and in prison, he strives to escape vicious torture. A cross between a 1970s American paranoia thriller and Sam Fuller&#146;s Shock Corridor, Boycott still shows signs of Makhmalbaf realizing his own cinematic language, particularly in one 540 degree pan. Boycott is tedious polemical cinema with pretentious dialogue like, &#147;I had begun with the postulate: I fight, therefore I am. But now I doubt whether I really exist, and therefore I don&#146;t care to fight.&#148; It is, however, certainly worth watching as a curio in Makhmalbaf&#146;s oeuvre.

The Cyclist (1987) is perhaps the best film in the series. It is cinematically more sophisticated than Boycott as Makhmalbaf makes beautiful use of backlighting and camera dollying. Ateh, nicknamed Nassim (Moharram Zaynalzadeh), is an impoverished Afghan immigrant whose wife is dying from a serious illness. Unable to find any other job to pay for her medical bills, he agrees to a circus act in which he will ride a bicycle in a small circle for an entire week straight. He has to deal with a riot getting in his way and sabotage as betting whether he will make it becomes intense, but simply staying awake on the bicycle becomes the most monumental task. His young son hands him food and drink, and he props his eyes open with toothpicks in his ride that may determine life and death for his wife.

Shot in expressive black and white, Once Upon a Time, Cinema (1992) is the most beautiful Makhmalbaf film in this collection. An expression of the love of film, particularly Iranian film, the movie follows Ebrahim-Khan, The Cinematographer as he is called, while he tries to introduce cinema to the Persian court at the beginning of the Twentieth Century. The Cinematographer may be made up to look like Charles Chaplin, but the film pays equal homage to Buster Keaton in employing characters who leap on and off the screen as in Sherlock, Jr. Makhmalbaf quotes sight gags from The Kid and other Chaplin films, but suffice it to say Chaplin does Chaplin a lot better than Makhmalbaf. Makhmalbaf also over-indulges in surrealism, but he does manage many memorable scenes &#150; an opening landscape shot worthy of Andrei Tarkovsky, a slow-motion storm of leaves, a cow and a man half-buried in film stock, a montage of movie embraces, and a spoof of his own film, The Cyclist.

Comedy has always had greater translation problems than drama between cultures, and The Actor (1993) is prime evidence. It is less amusing than frighteningly absurd, not unlike much Hong Kong comedy filtered through Western eyes. The story has famous and successful movie star Akbar Abdi (playing a fictional version of himself long before John Malkovich did), plagued by infertile wife Simin (Fatemah Motamed-Aria) who desires a child. She brings home a deaf and dumb gypsy mute (Mahaya Petrossian) as a second wife for her husband, but that just might cause more problems than it solves. The doughy tantrum-prone Abdi here seems to be channeling Gene Wilder and Zero Mostel from The Producers simultaneously. Makhmalbaf meanwhile pays homage to Jacques Tati&#146;s Playtime with an automated room and to Luis Bunuel with a surreal scene of Simin fishing out of her window.

Makhmalbaf may have made his mark in the West with A Moment of Innocence and Gabbeh, but any serious student of his films would have to see the movies in this Facets collection to get a thorough understanding of Makhmalbaf and his methods.