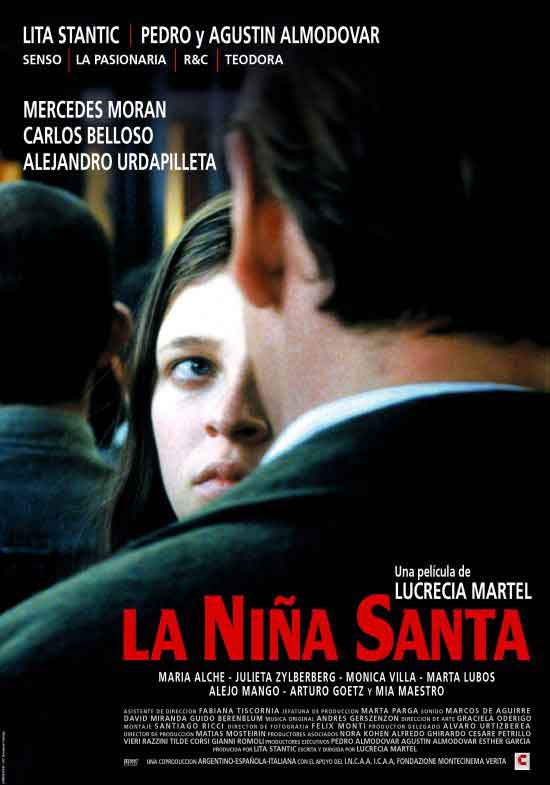 "What is it, Lord, you want of me?" sings the choir leader as tears start to flow from her eyes. Behind her back two girls gossip–they’ve seen her passionately kissing a man. One of the gossips is Amalia (Maria Alche), who lives in a hotel/spa owned by her family and run by her mother, Helena (radiant Mercedes Moran), and her uncle, Freddy (Alejandro Urdapilleta).

At the hotel pool, Amalia prays to distract herself from the male bodies on view, but it is difficult to contain her blooming adolescent desire. Her friend and fellow-gossip, Josefina (Julieta Zylberberg), explores sex with her cousin, but stops short of vaginal intercourse. "I don’t want premarital relations," she declares while apparently indulging in just about everything else.

Writer/director Lucrecia Martel (La Cienaga) fills her film with well drawn characters, real people caught up in the disquietudes of difficult relationships, a demanding religion, unfulfilled needs, broken families. Contradictions abound. The spa, a place of healing and cleansing, is a decaying old building; chambermaids are constantly spraying in an attempt to keep the facility clear of encroaching decay. There is a convention of otolaryngologists (ear/nose/throat specialists) at the hotel, healers who, it becomes clear, deal in their own share of moral corruption.

One of the physicians, Dr. Jano (Carlos Belloso), a married man with children, turns out to have a sexual interest in adolescent girls. Amalia, in a confused amalgam of desire and perceived religious vocation, encourages the terrified Jano. Her divorced mother is attracted to Jano as well, and not beyond responding when she thinks Jano is making an advance on her. There’s a suggestion of an overly intimate connection between Helena and her brother, too.

Martel lets her story proceed in small steps, short scenes that often suggest, rather than overtly assert what is going on. She gives it all a perfectly natural air and she is nonjudgmental, even sympathetic towards the moral shortfalls of these people. Her characters are likable, lending all the greater sense of decadence as the hidden behaviors, twisted rationalizations and dysfunctional relationships of the ensemble come into focus. It’s a stunning piece of dramatic filmmaking, a completely original approach to the material that delivers a delayed punch as the evidence accrues.

As John Sayles ended his film, Limbo, Martelbrings her film to an unexpected and seemingly precipitous close which is bound to be offputting for some. But, as with Sayles, the filmmaker already has made her point; tying up the plot with a neat ending isn’t necessary. Indeed, by not doing so, Martel pushes the viewer into further consideration of what has come before and underscores the central thrust of her thoughtful and observant film.