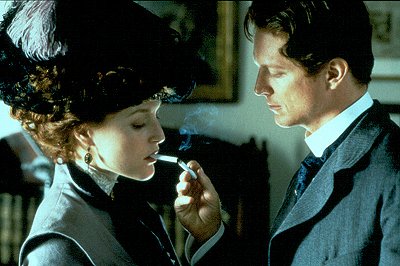 Gillian Anderson in The House of Mirth

Buy the photo at MovieGoods.com

Novelist Edith Wharton (1862-1937) was born with a silver spoon in her mouth and, in her writings, etched that spoon with her acid-sharp observations of the privileged society which was her birthright. The Age of Innocence earned her a Pulitzer Prize and was made into a widely admired film by Martin Scorsese. Ethan Frome looked not at Society, but at the hardscrabble life of a New England farmer; it reflects, nonetheless, Wharton’s interest in affairs of the heart and complex issues of morality. (The unfortunately underrated film by John Madden is profoundly moving.)

The House of Mirth, in familiar Wharton territory again, is the story of Lily Bart (Gillian Anderson), a beautiful and desirable woman with an income inadequate to sustain her in the gilded circles into which she was born. In this society, whose rigid hierarchical structure is under some challenge from rapid economic change, a woman’s role was to marry with little or no alternative. Lily loves–and is loved by–Lawrence Selden (Eric Stoltz), but Selden is an attorney without great fortune and not deemed a suitable match. When suitable matches are in the offing, Lily turns away because they are dull and uninteresting. As she fails to make the right connection, she becomes the target of social climbers, sexual predators, and viciously fickle society friends, all the while running herself into debt due to a weakness for gambling. There is a long downward arc to the story as Lily’s destiny grows ever bleaker, countered, interestingly, by her growing understanding and her strengthening moral fiber. She is a figure of genuinely tragic stature.

Director Terence Davies, best known for two poetic memory trips into his Liverpool childhood, Distant Voices, Still Lives and The Long Day Closes, makes a welcome return with The House of Mirth. The dark palette (and dark lighting) from his earlier work continues here; while some may find it overly bleak, it is not inappropriate to the content. Production designer Don Taylor and costume designer Monica Howe (both shoo-ins for Academy nominations), recreate the opulent interiors and elaborate gowns and hats of the early 20th century New York haut monde. (Davies mostly filmed in Glasgow, Scotland, a city with surviving grand Victorian architecture.)

But Davies does not let The House of Mirth devolve into mere display. The settings are the framework for a complex human drama which is traced with clarity through a series of hopes and disappointments, decisions and errors, and invidious betrayals, all within the context of the mores of the period, but of a sufficiently timeless universality to be immediate and meaningful to a contemporary audience.

Gillian Anderson’s performance is understated as she participates in the prescribed social interactions of that polite (if deceitful) society. As Lily’s fortunes turn, she puts on a brave public face; with subtle inflection Anderson shows the growing inner anguish behind the composed facade. It is a bravura performance embodying both the dignity and the desperation of Lily Bart. Stoltz, too, underplays his role in an effective way, a Selden seemingly cool and unruffled, polite and professional.

Laura Linney delivers another of her superb performances – totally different from her recent role in You Can Count on Me. As Lily’s friend, Bertha Dorset, she’ll be the woman you love to hate.On the negative side, Dan Aykroyd, as Gus Trenor, is flat and awkward and veteran Eleanor Bron, as Lily’s aunt, overplays to the point of single-dimensional caricature.

If Davies misses the mark in his direction of these few characters, he more than compensates in the performance he has drawn out of Anderson and in the faithful translation of a subtle and complex novel into an intriguing film that fully engages both the mind and the heart.