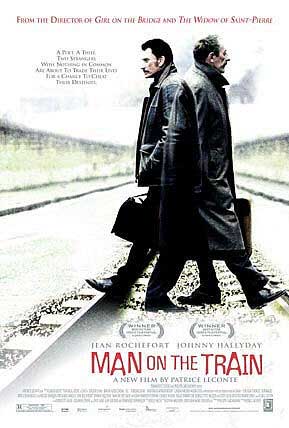 Director Patrice Leconte (Monsieur Hire, The Girl on the Bridge, The Widow of St.Pierre) consistently turns out thoughtful, character-based films. He’s especially expert at the telling detail, filling even a simple plotline, such as that of The Man on the Train, with small observations of behavior that, together, add up to an integrated whole considerably greater than the sum of its parts.

The man on the train seen behind the maintitles is Milan (Johnny Hallyday), whose tired eyes sit in a face that suggests the tough guy that he is–a veteran bank robber, arriving in a small provincial town to meet some co-conspirators and pull off a heist. Stopping in a drug store to pick up something for a headache, he is engaged in conversation by Monsieur Manesquier (Jean Rochefort) an elderly retired teacher. Invited for a drink, Milan ends up staying at Manesquier’s once grand, but now shabby, family home when he discovers that the local hotel is closed.

The heist is planned for the following Saturday, the same day that Manesquier is undergoingbypass surgery. All a bit too neat, really, but it gives Leconte the setup he wants to explore the interaction between two utterly different people who spend some time getting to know one another and find in each other alternatives to the lives they have known.

Manesquier is gregarious in the manner of some people who live alone; his talk flows freely and without inhibitions, as if it has been stored up waiting for a listener, in contrast to the somewhat taciturn Milan. Manesquier is self-deprecating, but in an off-handed, amused way. When Milan finds him playing Schubert on the piano, Manesquier remarks that, aside from needlepoint, he has all the skills of a well-bred nineteenth century French girl.

Even as Milan starts to be attracted by the comfortable, peaceful, cultured life that Manesquier leads, Manesquier is fascinated with the pistols he discovers amongst Milan’s belongings and he asks Milan to teach him to shoot. He tries on Milan’s fringed leather jacket. He is drawn to the freedom, the adventure, the unpredictability of Milan’s life. He speaks of events as happenings which will create memories for the future, suggesting, by implication, that his own life has been forgettably uneventful. And he begins to make changes–a shorter haircut from the barber who has cut his hair for decades, a frank confrontation with his sister about formerly unspoken things.

Manesquier fantasizes about what it would be like to rob a bank and run off to the Bahamas, but it becomes clear that he has a firm handle on the difference between fantasy and the parametersof reality–he offers Milan money in an effort to dissuade him from robbing the bank. Milan refuses; as intrigued as he is by Manesquier’s life, he hasn’t been changed by Manesquier nearly as much as Manesquier has been changed by him.

It’s a "grass is always greener" theme, explored perceptively and with subtlety. Leconte suggests the natural yearning for a broader experience, for breaking out of the patterns into which a life tends to fall. And, as the two men continue towards their destinies, he adds a layer of moral underpinning to the choices that people make.

The role of Milan doesn’t require Hallyday, primarily a pop singer, to say much, but his craggy, almost brutish presence works perfectly as a foil for Rochefort’s star turn. Veteran Rochefort (The Closet, Ridicule) inhabits his role, investing Manesquier with intelligence, charm, and brittle, honest self-awareness leavened with a sparkling sense of humor.

(21009)
$7.99 (as of January 26, 2021 - More infoProduct prices and availability are accurate as of the date/time indicated and are subject to change. Any price and availability information displayed on [relevant Amazon Site(s), as applicable] at the time of purchase will apply to the purchase of this product.)

(20410)
$5.94 (as of January 26, 2021 - More infoProduct prices and availability are accurate as of the date/time indicated and are subject to change. Any price and availability information displayed on [relevant Amazon Site(s), as applicable] at the time of purchase will apply to the purchase of this product.)

(18936)
$6.99 (as of January 26, 2021 - More infoProduct prices and availability are accurate as of the date/time indicated and are subject to change. Any price and availability information displayed on [relevant Amazon Site(s), as applicable] at the time of purchase will apply to the purchase of this product.)
related posts