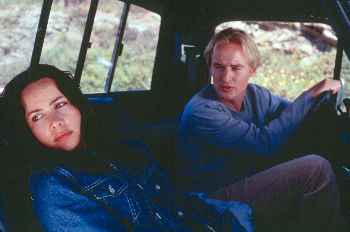 The Minus Man, writer-director Hampton Fancher&#146;s low-budget allegory about the double-edged nature of innocence, is so in love with its enigmatic air that there&#146;s no there there.

The story &#150; which revolves around what happens when Vann (Owen Wilson), a likable, scrawny drifter with a penchant for poisoning strangers, wanders into a small coastal town &#150; is superficially patterned after Jim Thompson novels such as The Killer Inside Me and Pop. 1280. But Thompson&#146;s pulp is straightforward, and we understand why his small and grimy protagonists resort to murder &#150; it makes them feel potent and justified for the first time in their lives, if only on psychotic terms. The Minus Man, on the other hand, is an arty Rorschach test that prides itself on not standing for anything.

Early on it&#146;s implied that Vann&#146;s murders may spring from a twisted brand of altruism, that he&#146;s an Angel of Death who supplies a painless passing for the emotionally maimed, such as the slatternly junkie (singer Sheryl Crow, in her film debut) he meets in the opening scene. Vann&#146;s method of extermination &#150; poison administered via a flask of amaretto &#150; makes the young woman simply drop off to sleep, and he disposes of her body with an almost ritualistic tenderness. But the worst thing that can be said about Vann&#146;s next victim, a high-school football star with a promising future, is that he&#146;s somewhat dull and inarticulate. It&#146;s easy at this point to suspect that generalized complacency may be Vann&#146;s real target, for The Minus Man is riddled with sub-Lynchian shots of suburban bric-a-brac: birdhouses, lawn ornaments, water sprinklers. But when Vann selects as his final victim a man who has the simple misfortune of sitting near him in a diner, the film acknowledges the change in his modus operandi without ever speculating on its causes or ramifications.

The Minus Man is a crazy quilt of other movies. Bits of Raising Arizona,Yojimbo, and Blue Velvet pop up here and there, but its true forebear is Badlands. Vann&#146;s voiceover narration aspires to the emotionally primitive note of Sissy Spacek&#146;s narration in Terrence Malick&#146;s great film, and like Kit (Badlands&#146; main character), Vann views the consequences of his murderous actions through a media-based sensibility. In a series of ongoing fantasies inside Vann&#146;s head, he is grilled by two cops (Dwight Yoakum and Dennis Haysbert) who parody all the poses and attitudes of TV detectives; it&#146;s a pop-laced imagining that&#146;s akin to Kit&#146;s wanting his girlfriend to scream out his name when the police shoot him.

God knows Fancher found himself some able performers. Janeane Garofalo is fine as Ferrin, the lonely small-town girl who becomes infatuated with Vann after they begin working together in the local post-office. Garofalo doesn&#146;t make Ferrin a drag even though half of her scenes require her to tote around a whiskey bottle that ought to have PROP written on its label. When Ferrin rattles off an explanation about the division of labor &#150; "A carrier can&#146;t clerk and a clerk can&#146;t carry. We don&#146;t cross crafts in the post office" &#150; she breaks up laughing at the goofy poetry coming out of her mouth.

Brian Cox and Mercedes Ruehl also inject some humanity into Fancher&#146;s lab experiment. As Doug and Jane, the couple that takes Vann in, first as a boarder and then as a surrogate son, they play two people whose marriage has deteriorated into a shambles. Cox (he&#146;s mainly known for his portrayal of Hannibal Lecter in Manhunter, and he more recently played the dean in Rushmore) looks like a lighter, less monumental version of Albert Finney. (Doug is even the same kind of bruised lion role that Finney specializes in playing.) As Cox plays him, it&#146;s utterly believable that Doug would have darker currents running beneath his maudlin, platitudinous surface. And despite having only subsistence fare in the way of dialogue, Ruehl communicates the magnitude of Jane&#146;s despair with a series of telegraphic gestures, as when she pinches off her own throat with the web of her hand while talking to Vann about her marriage.

Owen Wilson&#146;s fans don&#146;t have much reason for cheer. Wilson usually scores with a gleaming-eye craziness that threatens to upend whatever situation he&#146;s in, but the keynote of Vann&#146;s character is his blank-slate quality and outwardly normal appearance. The Minus Man never makes clear what it is about Vann that so disarms the other characters &#150; it&#146;s certainly nothing in his dialogue, which is a series of vanilla-flavored pleasantries. Anyone in real life who combined Wilson&#146;s chipped, eroded features with Vann&#146;s bland secretiveness would probably give us the creeps.

The Minus Man&#146;s biggest problem is that Vann doesn&#146;t give us any real charge, positive or negative. What&#146;s the point of building a whole movie around such a loaded and overused figure as a serial killer if you refuse to have any strong feelings about him? Films as varied as M., Purple Noon, Psycho, and Henry: Portrait Of A Serial Killermanaged to express moral ideas of great subtlety without reducing their characters to bloodless ciphers. On the contrary, their characters retained an air of appalling malevolence and fascination despite their careful detailing. By taking part in their scheming, by participating with them, audiences got some sense of what made them tick, and unsettling as the experience may have been, it was a thrill to step into their universe. Perhaps such pursuits are too morbid or low for Fancher&#146;s taste, for Vann never manages to shake the dirt off his metaphorical roots; he remains a scarecrow clad in ragged ideas. By the film&#146;s end, it is only the idly curious who still care what the mini-montages of him washing his pickup truck or delivering the mail are supposed to be telling us.

The Minus Man shows signs of heavy tinkering in the editing room &#150; an inexplicable scene with Meg Foster parachutes right through the middle of the movie without disturbing a thing &#150; but it&#146;s hard to imagine that Fancher&#146;s vision would be much different even if it were delivered to us pure. The film&#146;s marketing effort, almost certainly courting the Blair Witch audience, tries to turn vagueness into a selling point. ("Conversation usually follows," the advertising tagline reads, but it makes no promises about the length of that conversation.) Despite its trio of crafted performances, The Minus Man is a self-canceling muddle. Do yourself a favor and rent Badlands instead.