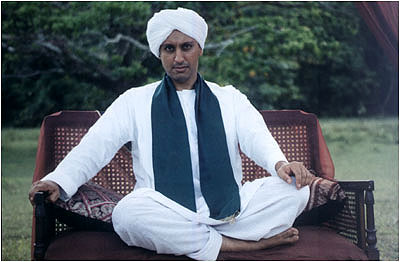 There are elements of autobiography in Nobel Prize-winning novelist V. S. Naipul’s first published book, The Mystic Masseur. Naipul was born in Trinidad of Hindu descent and attended Oxford University. Ismail Merchant’s film adaptation of The Mystic Masseur begins at Oxford where its hero, Ganesh Ransumair (Aasif Mandvi) is visiting; he is in awe of this seat of scholarship, of the library as repository of the world’s learning .

The film then tells his story in flashback, starting with his getting fired from his job as a teacher in Port of Spain. Returning to his father’s rural village, he has great ambition to write books, but in order to support himself he begins to practice as a masseur. This venture seems doomed as well until it takes on mystical overtones of faith healing. In the simple, largely illiterate Indian community in which he lives he develops a reputation that spreads through the island. He also begins publishing books, beginning with "One Hundred Questions and Answers about the Hindu Religion."

Ganesh marries Leela (Ayesha Dharker), the daughter of Ramlogan (Om Puri), a scheming, greedy, and sly neighbor. When they fail to have children, Ganesh says, "Books will be my children." Ganesh’s fame gets him involved in politics and he wins honors in Port of Spain, only to ultimately find himself out of his depth in the complicated politics of a multi-ethnic society dominated by the British colonialists. Other characters come into play including Ganesh’s supportive and wise old aunt (Zohra Segal) and Mr. Stewart (James Fox), an eccentric Englishman following his spiritual path in rural Trinidad.

There are many plusses in Merchant’s film, including this year’s second joyous Indian wedding (see Monsoon Wedding), endearing characters with the charming lilt of the varying Trinidadian accents, fine acting, and the usual superb production values of Merchant-Ivory productions.

But the film fails to achieve any meaningful identification with these characters, largely due to its sustained, unreal tone of comic fable. There are gentle chuckles, as when Ganesh cures the man who is sexually captivated by his bicycle or when Ganesh foils his father-in-law’s greed at the wedding. Comic fable is a rarified medium; it has to stay light for its proper effect, which, in effect, renders the characters and the situations less dramatic, less weighty in their effect.

Even as comic fable, however, Merchant (Cotton Mary) gets bogged down in a too-detailed narrative that is overladen with incident. He attempts to cover the multiplicity of themes that a novel can encompass, but that bounce about like unfocused potshots on screen. In the end, The Mystic Masseur is more precious than perspicacious.