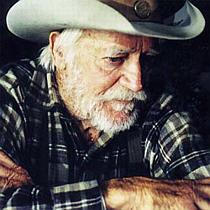 Whoever thought that David Lynch would make the first art-house Disney film? In one of the strangest turns of this strange cinematic year, Lynch has given us The Straight Story, a picture not only released by Walt Disney Pictures, but one whose general outline resembles traditional Disney fare. The wonder is that Lynch has not only made the material his own, he&#146;s made one of the most beautiful American pictures in recent memory, a laid-back, earth-toned curiosity piece that&#146;s brimming with unexpected emotion.

The Straight Story&#146;s parable-like narrative is based on actual events. Alvin Straight (Richard Farnsworth) is 73 years old and living in Laurens, Iowa, with his mentally-challenged daughter Rose (Sissy Spacek, in a brave, if brief, performance). Alvin&#146;s mortality is already on his mind when the film opens. His bad hips force him to walk with two canes, and the doctors want him to give up his beloved Swisher Sweets. This awareness is underscored when Alvin receives word that his younger brother, Lyle, has had a stroke. The two men haven&#146;t spoken in 10 years &#150; the movie doesn&#146;t worry about what caused the bad blood &#150; but Alvin, intent on repairing this bridge to his past, decides to swallow his pride and go see Lyle. The only problem is that Lyle lives in Wisconsin, more than 300 miles away. Alvin can&#146;t drive, so he buys himself a small mountain of wieners and Braunschweiger, climbs onto his 1966 John Deere riding lawn-mower (speed: five miles per hour), and sets off up the road, knowing it will be his last adventure. "He&#146;ll never make it past the grotto," one of his fellow fogies predicts.

But what looks like a lark on the surface &#150; a brittle old man on a lawn mower who is comically dwarfed by the semis whipping past him &#150; never loses its deeper urgency. During his trip, Alvin shares his campfire and his life with the people he encounters, among them a runaway teenaged girl, a family man who detects a kindred soul in the wayfarer, a pair of bickering twin brothers, and a country priest. He imparts a sense of gentleness to each of them, but The Straight Story refrains from giving him too many answers &#150; it doesn&#146;t canonize him. In the instances that he delivers direct advice, it&#146;s addressed to himself as much as his listeners. The importance of family ties is Alvin&#146;s favorite theme, for he&#146;s figured out at this late date that it&#146;s the only glue holding his world together. His natural reserve fits perfectly into the understated blackout sketches that screenwriters Mary Sweeney and John Roach use to tell his story &#150; each scene makes a simple point or two and then quietly slips away.

Farnsworth cuts a much different figure than he did 15 years ago as the aging outlaw in The Grey Fox. He&#146;s lean to the point of wispiness, the courtly, melodious voice has given way to a brusquer way of speaking, and the once twinkling eyes are here rheumy and bloodshot. But like the outlaw Bill Miner, Alvin carries about himself a pointed if threadbare fierceness. (It flashes up like heat lightning when a teenager offhandedly patronizes the old man.) Alvin&#146;s many sorrows &#150; his past boozing, the kids who died in childbirth, and so on &#150; make up the bedrock of his determination to see his brother one last time. The trip is his way of healing wounds inflicted by the past.

Despite its intimate story line, The Straight Story is a big-screen movie. Once Alvin sets out on his little green tractor, Lynch and cinematographer Freddie Francis turn the movie into an ode to the open road. The film was shot along the route taken by the real Alvin Straight, and his journey is turned into a fluid array of crane, Steadicam, and helicopter shots edited together with choreographic precision. Two or three long montages fold Alvin&#146;s restless soul together with America&#146;s distances and beauty, and the autumnal lyricism of these sequences is backed by mellow fiddle and guitar duets scored by Lynch&#146;s long-time composer, Angelo Badalamenti. The movie&#146;s overall effect is generous, harmonious; it&#146;s so seamlessly put together that you feel like you&#146;re seeing in every direction at the same time.

And yet all around its edges, The Straight Story is buzzing with Lynch&#146;s signature quirks: the eye-boggling blotches of beach towel colors; people engaged in mystifying bits of inscrutable physical business; peripheral characters on whom your mind bestows some generic appellation (in this case, "The Deer Lady") which you later notice is exactly the name given to them in the credits; unsettling visual effects (a dissolve from Alvin&#146;s house to a field of grass is timed to make it appear that the house is sprouting vegetation); and inexplicably right-feeling details, such as the pack of dogs that tears through the streets of Alvin&#146;s town like a gang of giddy delinquents.

Lynch&#146;s first two films were at the least very good, and his fourth one, Blue Velvet, was a flat-out masterpiece, an erotic comedy of horrors whose idiosyncratic and malignant vision was accessible, even palatable, to mainstream audiences. But after bringing the same sensibility to television &#150; or at least as much of it as the market would bear &#150; in Twin Peaks, he seemed to lose his way. He made the abysmal Wild at Heart, and overnight his gift for fragile alchemy began to look like charlatanism. His last film, Lost Highway, was infested with all of his usual obsessions, but it was heavy with empty flourishes and populated by mannequins, and the deadpan cops and koan-spouting psychos no longer charmed or tantalized because so little feeling could be sensed behind them. Lynch was slumming in a void of in-jokes and easy grotesques; he was playing to the art-house rabble.

For the moment, at least, he&#146;s replaced his freak-worship and mirror-maze storytelling with something more straightforward. A lot of Lynch fans are going to despise The Straight Story for its emotionality and homiletic sense of virtue, and because it displays an unalloyed affection for the flapjack side of America that we&#146;re used to seeing him kid and scorch. It&#146;s hard to imagine Lynch tarrying in this vein for even one more film, but in the meantime he&#146;s recovered something essential in his art. The Straight Story is once again grounded in the world that all of us share, and in the trajectory of Lynch&#146;s career it feels like an acoustic set played by a burned-out rocker who&#146;s decided to get back to basics. Maybe now he can cut some fine new tunes.