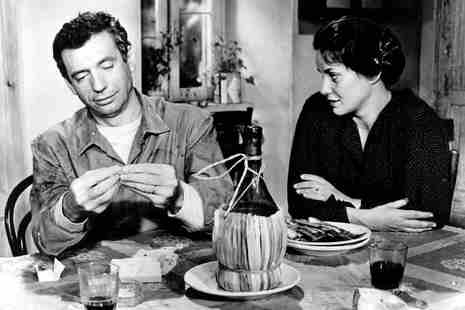 A restored print of Gillo Pontecorvo&#146;s 1957 first feature film, The Wide Blue Road, was finally released commercially in the United States in 2001, forty-four years after the film was made, thanks to the efforts of Jonathan Demme and Dustin Hoffman. Based on the short story &#147;Squarci�,&#148; by Franco Solinas, who also collaborated on the screenplay, the film chronicles the struggle of an Italian fisherman, Squarci� (Yves Montand), to overcome economic hardships.Squarci� lives with his wife Rosetta (Alida Valli, who recently passed away) and their three children on an island in the Adriatic Sea. Future Spaghetti Western icon Terence Hill, ne Mario Girotti, plays the supporting role of Renato, who falls in love with Squarci�&#146;s daughter. Giuliano Montaldo apprentices as assistant director, the beginning of a collaboration with Pontecorvo that will include two more films, Kap� and The Battle of Algiers.

Although the film does not place the narrative within a specific year, nor does it provide the exact location of the island where the story unfolds, two possible interpretations emerge from the elements provided by the mise-en-scene.A first reading suggests that if Italians live off the coast of Dalmatia (currently Croatia) then The Wide Blue Road would take place sometime between 1920 and 1947. In1920, following World War I, the Treaty of Rapallo gave Italy several islands off the coast of Dalmatia and the town of Zadar, while the rest of the mainland went to Yugoslavia.

In 1941, during World War II, the Axis powers invaded Yugoslavia–Germany occupied most of the territory, while Italy controlled Slovenia, Istria, and Dalmatia in its entirety.One brief linguistic reference situates the present tense of the narrative within a more specific historical context. Squarci� brings home a radio.One of his sons turns it on and the broadcaster speaks German.It is, then, World War II. Moreover, the press kit states that the film is set in a fishing village off Italy&#146;s Dalmatian coast. A second reading indicates instead that the story is set in Sicily because the characters mention two terms: the Mediterranean sea (which is not where Dalmatia is located, rather it is in the Adriatic sea) and the Continent (the way Sicilians refer to the mainland).This kind of temporal and geographical vagueness will disappear from Pontecorvo&#146;s subsequent films.

Determined to survive adversity, Squarci� challenges the traditional fishing methods of his fellow fishermen, as well as the law.While they catch fish with nets in scarcely populated waters close to shore, he chooses to detonate underwater dynamite in the open sea to kill dozens of fish in a single explosion.His technique proves successful and he is able to sell fish to the local wholesaler.The Coast Guard have suspected Squarci� all along, but have never been able to catch him.The arrival of a new Coast Guard commander, however, means a relentless pursuit to put an end to Squarci�&#146;s illegal practices. To stay ahead of the man, Squarci� buys a powerful motorboat. During the inevitable confrontation between the two, moments before being caught with the dangerous explosives, Squarci� sinks his boat to destroy evidence.Without the boat, he cannot catch and sell fish.This inactivity leads to the inevitable default on his payments on the boat.When the collectors arrive at his house to seize his belongings, Rosetta pleads with them, the only time a woman takes charge in a world dominated by men, and successfully manages to delay payments, while a distraught Squarci� watches helplessly. However, shortly after Squarci� ventures where he has never gone before &#150; he blast-fishes from the shore.

A dispute that degenerates into a fistfight ensues between Squarci� and the village&#146;s fishermen–most prominently between Squarci� and his childhood friend Salvatore (Francisco Rabal).Later, in defiance of the honor code that governs the fishing community, Squarci� bids on a boat that has been seized from a fellow fisherman and auctioned. Not only is Squarci� an outlaw, he also effectively becomes an outsider within his own community.Coincidentally, his name is almost identical to the Italian word &#147;squarcio,&#148; which means, &#147;tear.&#148;Squarci� metaphorically tears his community apart with his unconventional approach to well-established fishing practices.&#147;I am not the co-op type,&#148; replies Squarci� to Salvatore&#146;s attempt to convince him to join his fellow villagers who joined forces and organized a co-operative that will enable them to sell their catch without the wholesaler&#146;s mediation and put an end to his exploitation of their work.

In opposition to Squarci�&#146;s individualistic pursuits, Salvatore embodies the collective voice of the fishermen&#146;s plight.Salvatore&#146;s quest is reminiscent of Luchino Visconti&#146;s The Earth Trembles (1948), an indictment of the abuse suffered by Sicilian fishermen at the hand of wholesalers and the struggle of one family to establish their own business.The similarities to Visconti&#146;s film would have been greater, had producers agreed to Pontecorvo&#146;s aesthetic vision.While the director intended to shoot in black and white, the producers insisted on color to make the film more commercially viable.While the director wanted to employ a cast of fishermen who would play themselves, the producers imposed the star casting of Yves Montand and Alida Valli. However, these two elements give the film its Viscontian touch, albeit a post The Earth Trembles one.The Wide Blue Road references Senso (1954), both in its visual style and with Valli&#146;s presence.

In the final sequence of The Wide Blue Road, a striking visual contrast is established between the gathering of the men as they prepare for their very first trip as a fishing collective out to sea on their sailboats and Squarci�&#146;s lone journey in his little motorboat.This voyage will also become his last: Squarci� literally tears his body apart when the bomb he was setting explodes in his hands.As he lays dying, he delivers his final thought: &#147;What a pity, it was a beautiful day for fishing.&#148; (16088)
$11.50 (as of January 21, 2021 - More infoProduct prices and availability are accurate as of the date/time indicated and are subject to change. Any price and availability information displayed on [relevant Amazon Site(s), as applicable] at the time of purchase will apply to the purchase of this product.)
related posts