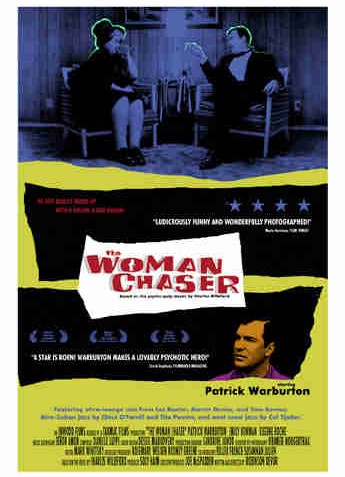 Charles Willeford was one of the luckiest authors ever to have his novels put onto film: few writers have seen adaptations of their work infested with so many touches of dark, indelible wit. In Monte Hellman&#146;s Cockfighter, it was Warren Oates trying to juice the odds of a fight by slicing a hairline fracture into the beak of his stud meal ticket. In Miami Blues, it was Alec Baldwin getting the fingers of one hand meat-cleavered off in a pawnshop robbery, and pausing in his escape to scoop up the severed digits from a countertop. Robinson Devor&#146;s The Woman Chaser doesn&#146;t have any of that kind of nasty business, but like those earlier adaptations it&#146;s a succulent blend of pulp and art, and a movie you&#146;ll instantly remember when somebody brings it up a few years from now.

Willeford&#146;s publishers pushed the title The Woman Chaser on him. He wanted to call it The Director, which at least points towards the crazy-making tensions between our sexual, creative, and commercial drives that the story is about. Used car lot manager Richard Hudson (Patrick Warburton) approaches his job with the fervor of a messiah who doesn&#146;t care about having a flock. He&#146;s brutal to his employees, making them wear Santa Claus suits in an August heat to attract customers. He&#146;s brutal to the women in his life, dispassionately screwing them and tossing them aside. "To me!" he cries, cheering himself on with a glass of booze while standing waist-deep in his motel&#146;s swimming pool. But Hudson feels hollow, depleted, and during an Oedipal (and hilarious) dance with his mother he realizes that creative energy can ward off the nihilistic fear that&#146;s eating at him. Mulling over his options, he decides to make a film because all the other arts require long years of practice: "But I knew I could write and direct a movie!" He sketches out an idea for a screenplay &#150; an idiot&#146;s parable about the death of innocence called The Man Who Got Away &#150; and hustles Leo Steinberg (newcomer Paul Malevich), his downtrodden stepfather, into helping him pitch it at the studio where Leo once worked as a director.

It&#146;s here in its middle section that The Woman Chaser&#146;s energy flags. The mogul who greenlights the project is too festering and crass (we&#146;ve seen him before), and Hudson&#146;s fantasies of what his movie will be like aren&#146;t half as compelling &#150; or funny &#150; as the glimpses seen of him in action as a director. But when he finishes shooting his film, Hudson surprises us with his idea of perfection: like Robinson Devor, he&#146;s a less-is-more type of artist. Hudson&#146;s battle against the studio to release his cut of The Man Who Got Away has a drive that an Orson Welles might bring to it, but when Hudson&#146;s commitment to his harebrained movie flames too high, he turns into a destroyer.

The Woman Chaser establishes its &#146;60s period setting with some minimal but deft use of location and decor. Shot in a scrubbed-looking black and white, it&#146;s filled with stray but resonant imagery: the used-car lot that sits in the shadow of the Capitol Records tower; a car salesman clad in half a Santa&#146;s suit, pissing like a derelict against a brick wall; a backside view of a Salvation Army worker&#146;s hopelessly elaborate underwear. Hudson is surrounded by gaunt, deprived faces that make him (whatever else we may think about him) the movie&#146;s most vivid and alive character. Devor&#146;s fluid shifts between Hudson&#146;s real-life doings and the world of his imagination give us an effortlessly full-length view of the man. And the character of Hudson&#146;s stepfather is conceived as a marvelously quiet comment on Hollywood history. Obviously Jewish (and perhaps a German emigre), driven out of the industry by his lack of talent, Leo retains an ample, comfortable home where he spends his days prizing the last souvenir from his days as a somebody: a ghastly portrait of a clown.

Patrick Warburton (known mainly as "Puddy," Elaine&#146;s squint-eyed, flat-voiced boyfriend on "Seinfeld") is a surprisingly smooth and funny actor. In his tuxedo and shades, he looks like a human dry martini. He puts a complex spin on Hudson&#146;s petulant tantrums, making them infantile and threatening at the same time, and he doesn&#146;t shy away from the generous amounts of downtime that Devor has built into the movie that allow us to just observe Richard Hudson both in action and repose. And Warburton&#146;s dry voice is a perfect vehicle for Willeford and Devor&#146;s laid-back witticisms. "After I burned down the studio," Richard Hudson tells us, "I was thirsty." The Woman Chaser is a class act.