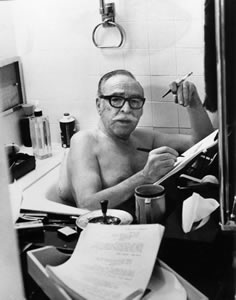 Dalton Trumbo was one of the Hollywood Ten, a group of screenwriters and directors who, in 1947, were convicted of contempt when they refused to answer questions about their political beliefs when subpoenaed before the House Committee on Un-American Activities. In 1945, Trumbo was the highest paid screenwriter in Hollywood, and by 1950, after spending time in jail for contempt of Congress, he was struggling to find any work at all. It was a bad time in America—a time of fear, paranoia, bigotry, and blacklisting. It was a time when some people showed great moral steadfastness, and many others showed none at all, not even about naming names, which they did in order to keep their jobs, their livelihood. Dalton Trumbo was one of the steadfast ones. For him, it all came down to some very simple principles, namely that all people have the freedom to think and to believe what they want, and he never strayed from his belief in these basic human rights. If anything, he only grew more and more eloquent in defending them, and in denouncing those who didn’t.

The McCarthy Era’s shake-up of Trumbo’s life is retold in this eponymous documentary, which is based on a play written by his son Christopher Trumbo. Much of the film consists of recitations of letters Trumbo wrote to various people during this period, and they are grand illustrations of the clarity of Trumbo’s thinking, but also the passion and unsurpassed elegance in his writing. All of the actors chosen to read these letters bring Trumbo’s amazing gift as a writer to full fruition in their eloquent readings. All of the performances are noteworthy, all perfect in their shadings and graceful gestures, and their voices ring true with just the right emotional register. David Strathairn is full of barely controlled rage and sharply articulated bile as an indignant father writing to the principal of his daughter’s school, after she has confided to him that she was bullied and teased for being part of a family of communists. Donald Sutherland’s rich voice adds skin-tingling resonance to a long passage from Trumbo’s early novel, Johnnie Got His Gun, about the selfish arrogance of sending young men to war. And Nathan Lane’s genius at comic timing and phrasing brings out all the hilarity Trumbo meant it to evoke when he reads the letter Trumbo wrote to his son declaiming the belief that onanism is a sin, and thus allowing his son the full guilt-free merits of masturbation. Brian Dennehy lends just the right weariness and unadulterated regret to Trumbo’s letter of apology to one of his friends to whom he owes money. In an interesting turn, Joan Allen reads from Trumbo’s letter of condolences to the mother of one his fronts, Ray Murphy, a dear friend whose untimely death has shaken him. Except for Strathairn’s brief lapse of control when voicing Trumbo’s paternal rage (his eyes fill with tears), all the male actors speak with the calm authority and controlled passion of their gender, and yet here, Joan Allen at times can barely speak, she is so moved by the emotion in the letter.

Besides these magnificent readings, the film rewards us with some fascinating footage of interviews with Dalton Trumbo himself, who was just as articulate in conversation as he was on the page. And just as unambiguous in his sense of what was just, and just as precise in his understanding of human behavior, of frailty as well as dignity. The film also includes clips from some of the films Trumbo wrote, scenes that mirror the moral fabric of his time, and the battles Trumbo himself was engaging in. The scene in Spartacus where all the slaves rise, one by one, declaring “I am Spartacus,” in order to protect their leader, played by Kirk Douglas, from being captured, takes on new meaning in this context. If everyone had stood up to McCarthy and his thugs, their power would have been greatly diminished.

Trumbo is a beautifully directed and passionate homage to the dignity of one man against the indignity of the times. It’s also a tribute to the power of the written word, and its capacity to move people into realizing that we, too, have a choice in how we live our lives.