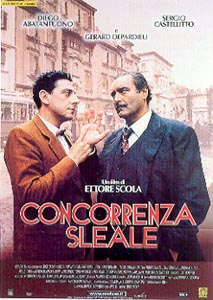 Veteran director Ettore Scola has made some memorable films over the years. A Special Day (1977) co-starred Sophia Loren and Marcello Mastroianni as neighbors in Fascist Italy who find a connection in troubled times. The fine performances aided in creating well-realized and sympathetic characters, all enhanced by Scola’s artful direction. Le Bal (1984) was a tour de force: without a word of dialogue it looked at half a century of French history through the lens of a ballroom. And the rarely seen Splendor (1989) is a comic and deeply-felt homage to the cinema.

But, in his four decades of filmmaking, much of Scola’s efforts have fallen short, often rambling, loose-ended, skimpy in characterization, and overindulgent in sentimentality.

Unfair Competitionis not a terrible film and it benefits from the obvious sincerity of its message, the sadness and ironies of Fascist antisemitism along with Italian indifference to it during the 1930’s. But Scola has fallen into the pattern of his less successful films, failing to create rounded characterizations; never is there a sense of knowing these individuals, so, in the end, it is hard to care.

Two families–one Catholic, one Jewish–live next door to one another over their respective shops. Umberto (Diego Abatantuono) is a custom tailor with high end clients. Leone (Sergio Castellitto), his Jewish neighbor, has a ready-to-wear haberdashery. In an exaggerated style which aims for the comic (and mostly misses) the two compete in their window displays and marketing efforts, arousing ever greater conflict between them.

Meanwhile, Umberto’s daughter is falling in love with Sergio’s son and his younger son, Pietro, is best friends with his peer next door. The film is seen from Pietro’s viewpoint and includes voiceover narration by the boy. After a slow and overlong exposition sketches in the principal characters, Scola gets to the point as Mussolini introduces a series of racial (read antisemitic) laws which progress from banning Jews from a long list of professions, to banning Jewish kids from the schools, to confiscation of property, and, finally, to internment in the camps.

Each non-Jewish character responds to these events in a somewhat different manner, ranging from glee to indifference to mild, but passive disapproval. At the heart of the story is Umberto’s change of heart, from going along with the Fascists for convenience to a growing understanding and concern about the injustice that is happening to his neighbors. But when he reconciles with Leone in sympathy, the scene carries no emotional impact because the characters have been so thinly developed that it is impossible to identify with any of them.

A slew of additional characters are thrown into the hopper. Umberto’s brother, Angelo (Gerard Depardieu) is an idealistic schoolteacher who speaks boldly against the Fascist regime, but only to his brother, privately. A brother-in-law starts as a lazy layabout with thoughts about teaching dancing, but later appears admiring himself in full Fascist uniform. A Jewish clockmaker is a Lithuanian Jewish refugee who tries to buy his way to special privilege; his fate is as predictable as is that of Leone’s family. There’s a brief episode with Matilde, Umberto’s sales clerk, who is secretly in love with the unsuspecting Umberto. This character goes nowhere, a loose end left dangling.

The entire proceedings were filmed on sets at Cinecitta, the single street of the action growing claustrophobic in its obvious artificiality. The dome of St. Peter’s looms in the background, Scola’s way of suggesting both the presence and the silence of the church as Italy betrayed its Jewish citizenry. It’s a startlingly weak indictment under the circumstances. Perhaps a greater the presence of the church through clerics in the story itself might have made the moral point more strongly and added a much needed element of drama.