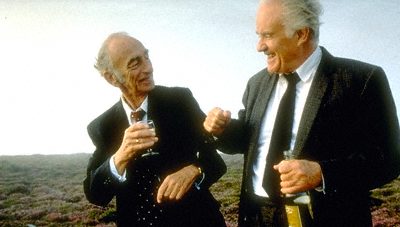 Waking Ned Devine has been a surprise hit for writer/director Kirk Jones who debuts with this light-as-a-feather comedy. It is hard to imagine anyone not having a good time meeting the charming and mischievous Irish men and women in their town of Tulaigh Morh, population 52 – at least at the start of the action. One or two are lost as the story unfolds.

The plot is simple, but provides a framework for excellent character building. David Kelley and Ian Bannen, as a pair of old friends scheming for a share of lottery winnings, are both totally delightful, turning Hollywood on its youth obsessed head, and proving that a movie focusing on older folks can be deliciously entertaining. The sight of Kelley riding his motor bike stark naked through the Irish hills is not one viewers will quickly forget. Deeply lined faces, craggy noses, bad teeth, sagging bodies – a lot closer to reality for most people than the buffed clones who all seem to look alike these days.

There is a romantic subplot involving an unwed mother, a pig farmer, and a local Lothario, providing some diversity to the humor. There is a wise young lad who offers some wisdom to the naive village priest. There is also some lovely scenery of the countryside and seacoast (actually filmed on the Isle of Man) – but Jones has the restraint to show us just enough, to avoid the picture postcard syndrome, and, with well paced editing, he keeps things moving right along. A score of Irish music provides appropriate accompaniment with a particularly lovely bit of mournful pipe playing at a funeral. The film does nothing to dispel the stereotype of the Irish as uninhibited imbibers.

The success of Waking Ned Divine rests in its director’s clear understanding of what he has set out to do. While made to the finest current technical standards, the film does not pretend for one moment to be anything more than it is – a lark peopled by some gently zany folks who give us gleams of recognition of ordinary foibles. It is the lack of pretense and Jones’ light touch that allows this confection to float successfully.