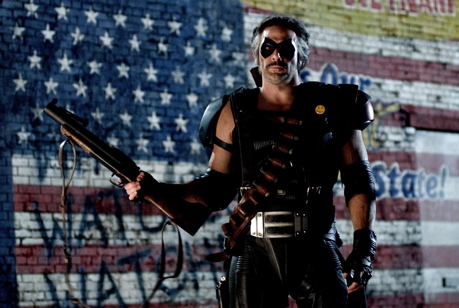 Not since the original Star Wars, way back 1977, has a fantasy film made such a huge splash. Both horrifyingly violent and bleak, and mirthfully, blackly, over the top, Watchmen, the nearly three-hour descent into director Zack Snyder’s vision of hell on earth defies disbelief. This film is a total immersion experience.

An ensemble cast of noir-era superego action figures, a Wagnerian plot, metaphysical underpinnings galore, a deluge of action, action-within-action, flashback-within-flashback, and a cavalcade of verbal, visual, and pulp-cultish in-jokes threaten to overwhelm the viewer. Snyder’s masterful control of pacing, miraculously, holds it all together.

Watchmen is set in an alternate version of 1985, where the US has won the Vietnam War, Richard Nixon is serving an unprecedented third term, and Depression-era comic-book superheroes are real. Having, in fact, no real super powers to begin with, these populist heroes are now merely aging former vigilantes, whose original popularity has soured, through their fall from grace, into public disillusionment.

Watchmen opens in medias res, crosscutting between what appears to be archival footage and a live-action murder in progress, Tarantino’s Pulp Fiction meets Orson Wells’ Citizen Kane at the intersection of Bladerunner and Brazil. A montage of details reveals that the world itself has slipped into paranoid darkness. The Cold War rages on, the Doomsday Clock is set at five minutes to midnight.

The freshly murdered Edward Blake (Jeffrey Dean Morgan) had been the Comedian, one of only two now retired superheroes to ever make their identities known to the public. As the camera reviews the Comedian’s public life, the perspective pulls back to reveal fellow masked vigilante and psychopath-outlaw Rohrschach (Jackie Earle Haley) as the private investigator. Clues as to the identity and purpose behind the Comedian’s murderer hint ominously at a much deeper and more diabolical conspiracy. Watchmen is told from Rohrschach’s perspective, and seems to be speaking, ventriloquist-like, for his fellow superhero gang members.

The story never quite progresses in a linear fashion, erupting only momentarily into adrenaline-pumping action sequences. As Rohrschach recruits his old pals out of retirement, nostalgia for a future that never was mingles poignantly with memories and fantasies of human couplings, physical and metaphysical. Pared down to only the barest necessity, the numerous back-stories mingle with the soap-operatic romance stories, and the uniquely chosen superheroes’ identities betray psychological twists and sexual perversions perhaps better left unearthed.

On another level, Watchmen centers on the history and relationships of the band of masked crusaders. Ozymandias (Matthew Goode) has revealed himself as Adrian Veidt, the most intelligent human alive. Dr. Manhattan (Billy Crudup), AKA Jon Osterman, alone possesses superhuman powers acquired in a freak accident; he glows an iridescent blue, his entire body capable of tumescence on a global scale. He has grown restless, and become an indifferent lover to Silk Spectre II (Malin Akerman), AKA Laurie Jupiter, a kind of Betty Paige dominatrix look-alike. As the old gang teams up again, Laurie will combine more than forces with Nite Owl II (Patrick Wilson), AKA Dan Dreiberg. In the process, every superhero’s history—both personal and psycho- (patho-) logical—will spill and spew across the screen.

Based on the 1986-87 twelve-issue Watchmen graphic novel (by writer Alan Moore, artist Dave Gibbons, and colorist John Higgen), director Zack Snyder’s cinemagraphic rendering of the decline and fall of the American Dream is spell-binding. Moore’s 1980s vision seems to be a meditation on the trajectory of the American Dream—from its original traumatic shattering in the 1930s, of which noir is a reaction, and the 1940s’ superheroes as fantasy wish-fulfillment, to the very real ending of representative democracy in an open society under Richard Nixon.

Snyder has the advantage of another twenty years’ perspective, and sprinkles flourishes of Hollywood films of the past fifty years, from Dr. Manhattan’s spectral Apocalypse Now appearance and Forrest Gump-like newsreels to the incestuously perverse undergirding of Chinatown. Watchmen takes on an ever more urgent Zeitgeist today, released just the other side of Bush the Younger’s imperial presidency and the currently unraveling financial chaos of the second worldwide Great Depression of 2009.

This film’s initial-release audiences are flocking to the cineplexes in an uncanny replay of the then-newly impoverished and traumatized American audiences of the 1930s. With new urgency and the shock of sudden despair on the heels of corporate-libertarian profligacy, everyone is asking anew Juvenal’s age-old question: “Quis custodiet ipsos custodies?”—“Who’s guarding the guardians?” Just as Juvenal, through his Satires, revealed the essential core of first-century Roman society, so Snyder’s film, through the vehicle of Alan Moore’ graphic novel, sends news reports back from the mythic heart of contemporary America.

It’s not for nothing that Rohrschach is so named, mirroring back Batman and the Joker in one, and whose identity is never revealed even to his fellow superheroes. Jackie Earle Haley’s Rohrschach speaks, again ventriloquist-like, in a gravely menacing voice that could easily be mistaken for Christian Bale’s Batman. It should be noted that in the films and novels of its day, the rise of fascism in Europe was frequently framed in the literary trope of ventriloquism, and The Cabinet of Dr. Caligari (1920) and other German Expressionist films speak clearly here reaching across the gap of time to the present.

As a narrative, Watchmen is the story of the death of a clown (The Comedian) as told by his psychic mirror (Rohrschach). In the film’s perhaps most arresting moment, the Comedian snarls over his shoulder back at the audience, “Whaddaya mean? This is the American Dream. It came true.”

Watchmen fulfills what The Dark Knight sought to achieve, demonstrating that the graphic novel as serious literature has come of age.