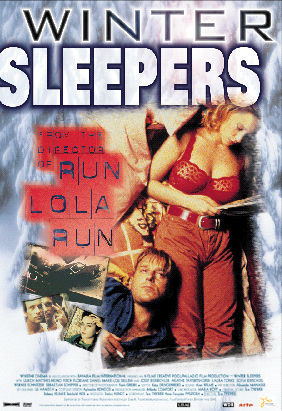 In last year&#146;s Run Lola Run, German director Tom Tykwer used hopscotch editing techniques to create a galloping comic-book confection. Lola gave a hotfoot to stodgy mainstream fare, but it was also mindless (the star of the movie was a hairdo), and its abuse of our fixation on pop ephemera made it a &#146;90s equivalent of the Monkees. It&#146;s surprising then that Winter Sleepers, Tykwer&#146;s newest arrival (and a film that he actually made before Lola) is a leisurely and chilling examination of five very human characters. Winter Sleepers reveals Tykwer to be a rarity &#150; a director who can be lyrical at different speeds.

Tykwer shot Winter Sleepers in Berchtesgaden high up in the German Alps, and the craggy, vertiginous location is a character in his gorgeous movie. A tiny nothing of a town, two or three cluttered households, and the twisting, snow-crusted lanes that connect these places &#150; this is the movie&#146;s narrow universe, and its inhabitants have nothing to do except to keep banging into each other. One particularly large bang sets the story in motion: an auto accident between a nearly bankrupt farmer (Josef Bierbichler) and a spontaneous car thief named Rene (Ulrich Matthes, who resembles a healthier Keith Richards). Rene staggers away from the scene and all but forgets the accident &#150; an old head injury has blown out his short-term memory. But Theo, the farmer, is unable to think of anything else for the crash has left his young daughter into a coma.

The accident kicks off a chain-reaction of events that mirrors the string of relationships dotted through the movie. Rene has stolen the car he was driving from Marco (Heino Ferch), a ski instructor and compulsive rake. Marco is involved with Rebecca (the delectable Floriane Danel), a translator on the ski slopes where Marco works. Rebecca&#146;s roommate, Laura (Marie-Lou Sellem), is a nurse in the local hospital where Theo&#146;s daughter is put under her care. And by chance Laura has begun seeing the enigmatic projectionist at the local movie theater &#150; Rene.

All of these people have secrets buried as deeply as the car that Rene leaves behind him nose-down in the snow. To compensate for his memory lapses, Rene photographs the events in his daily life so that he can remember names, faces, appointments; after the accident, his mind percolates with the sound of insinuating whispers and screeching car tires that leave him just short of piecing together what happened. Marco&#146;s philandering is a natural manifestation of his feeling that human beings have only "three good years." And Theo is the one person who wears his angst on his sleeve. He grows increasingly obsessed with finding the man who injured his daughter, but his only clue to the driver&#146;s identity is the serpentine scar that he glimpsed on Rene&#146;s head after the accident. Theo sees the scar everywhere: in his food, in mud puddles, in the shadows on his bedroom wall. Tykwer uses Bierbichler&#146;s raw, morning-light face to great effect, but our most memorable view of Theo is nearly a throwaway. As his family says grace at the breakfast table, he stares into the middle distance with a slack, lobotomized gaze, his body emptied by distress.

Winter Sleepers asks how much control we have of our lives, and how culpable we are for our actions. Its characters are both guilty and innocent of the damage they cause because they don&#146;t mean any of it &#150; sleepwalkers don&#146;t mean anything they do. Tykweruses the language of a thriller film to convey a sense of metaphysical dread, making it impossible to relax even when his characters are dashing along on ice skates, having a night on the town, or making love. When someone breaks a drinking glass unexpectedly, our impulse to laugh is out of all proportion to the actual event &#150; the movie&#146;s been working on us without our realizing it. Nothing is as simple or safe as it should be: the graceful layers of snowfall are creased by ragged, bottomless fault lines, and even a pail of fresh milk looks unspeakably contaminated.

If Winter Sleepers sounds familiar, it may be because Paul Thomas Anderson&#146;s Magnolia cast a similar pall of inevitability over a crowd of circumstantially related characters, but Anderson, too undisciplined to form his material, wound up with an ego-trip instead of a movie. Tykwer knows what he&#146;s doing, and he makes his connections in down to earth but poetic ways &#150; he holds the shot of a ski-accident victim lying in a bed of snow just long enough for it to rhyme in our heads with the little girl in her hospital bed. His characters aren&#146;t too aware of themselves even when they&#146;re discussing their deepest feelings, and they never flatten each other (or us) with quotable zingers. The incidental details of their lives &#150; a sporty new haircut, a broken date on New Year&#146;s Eve &#150; are made to serve a quiet purpose and then allowed to slip away.

Tykwer seamlessly laces together the commonplace and abstract, punctuating his characters&#146; activities with some quietly tense montages. And at the end, with a single dissolve, he leaves us with the unsettling suggestion that we&#146;re born only to suffer for sins that we&#146;re predestined to commit. He offers the conventional artist&#146;s solution to purgatory &#150; Love &#150; but missing is the standard contractual language that would guarantee our redemption. Winter Sleepers is both fire and ice.