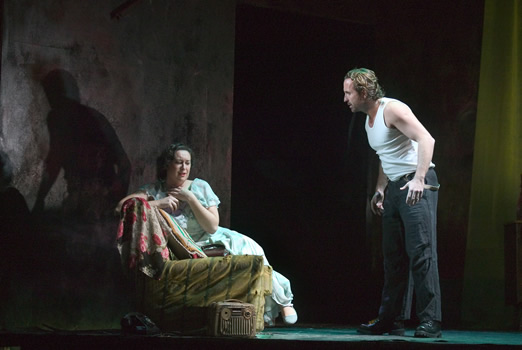 A rancid night in Dublin city: snarling rain tearing through dirty Autumn leaves whipped down from the trees into the gutter by Wintry gale-force winds. Men in tuxes and women in evening gowns scuttle towards the Gaiety Theatre, huddled under umbrellas trashing in the wind as if seeking escape. This is a perfect setting for the Irish premiere of André Previn’s A Streetcar Named Desire: director Lynne Parker’s nasty, ugly, growling nightmare vision of the Opera based on Tennessee Williams’ 20th century classic drama.

Williams has not always been a welcome guest in Dublin. In 1957 director Alan Simpson was prosecuted for obscenity under Irish law for staging The Rose Tatoo at the Pike Theatre and later imprisoned. It is a long time since the socio-sexual content of Williams’ work raised eyebrows though, and Previn’s Opera is likely to be at the wrong end of another kind of hostile reaction, on the level of aesthetics.

Seated at the premiere production on opening night, I saw fourteen empty seats in my immediate environs. At the interval, patrons staggered around like punch-drunk hoboes and at least one group of elderly ladies I saw put their coats on and left.

Let me get this out up front though, this is a good production. It is striking, challenging, difficult, atypical: the opposite of what Dublin punters now expect of their Opera. In spite of some stylish and exciting productions in recent years, most notably 2004’s Orfeo ed Euridice, the Dublin opera scene is not quite used to atonal contemporary music, nor to finding their night out become a hellish endurance test. Me? I’m all for it. I don’t understand the intricacies of the postmodern score any more than the next man, and I found myself drifting off during the first act, but I was acutely aware that what I was seeing was not the usual fayre and that sometimes the dissonances on stage and in the aural registers came together in intense bursts of emotion.

Monica Frawley’s set is truly ghastly. In the foreground a swirling dry-ice mist represents not some ethereal otherworld, but the dank, smelly hue of the filthy river running past the New Orleans home of Stanley and Stella Kowalski. The set is bathed in terrible, hateful light commanded by Tina McHugh. Unpleasant greens and yellows dominate (it’s no wonder Blanche fears illumination), echoed in the hideous furniture and a massive, ungainly curtain hanging centre stage dominating the space and splitting it in two. The walls are smeared with red and black paint laid on and layered like a canvas by Francis Bacon by way of Jackson Pollock. Boxed entrances left and right of stage provide a framing space where silhouettes precede the arrival of characters or merely suggest their presence, and a balcony overhead provides only the merest sense of actual space as home to Steve and Eunice Hubbell, the upstairs neighbours.

Into this chamber of horrors comes Irish Soprano Orla Boylan in the role of Blanche duBois, a character now come to her apotheosis from one of 20th century theatre’s most important roles to a figure of literally mythic resonance in tragic opera. Her seduction scene with the paperboy takes on a tone of Mephistophelean portent and the climactic rape scene is rendered with all the baroque terror of Don Giovanni’s fall. And yet, anchored by Williams’ words and Philip Littel’s libretto, an identifiably realistic heart beats at the Opera’s core. Lynne Parker’s experience to date has been with straight theatre, and she strives to hang on to some shred of naturalism amid the necessarily exaggerated trappings of the Opera stage.

The principal cast in this production are all Irish, notable in itself, also risky, and another point of great interest in terms of the challenge this show represents for the expectations of Dublin punters. There is no comfort zone of foreign tongue or foreign names here, merely the faces of Irish singers singing words in English that require concentration, not toe-tapping to the hits of Italian masters. Baritone Sam McElroy is an imposing Stanley, physically believable and intoning his lines with conviction throughout. Colette Delahunt is an effective Stella, her Sporano voice complementing Boylan’s without contesting the space. Though the musical logic is difficult to understand for a confessed initiate, Edel O’Brien’s Mezzo-Sporano shows great drama in Previn’s music in her brief but significant appearance as the Mexican flower seller whose sonorous, repetitive chanting of ‘flowers for the dead’ counterpoints Boylan’s increasingly fragile Blanche and represents her descent into insanity in the moving finale.

This is a brave, unyielding production likely to provide great contrast with the fun and friendly rendering of La Bohème with which it runs concurrently. I would be very surprised to see it generate much affection, but on a wet Winter night in Dublin, it certainly seemed at home.