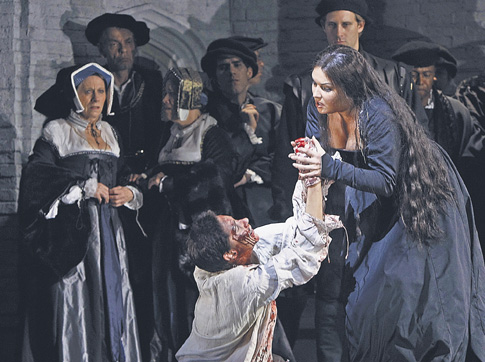 It’s tempting to call “Anna Bolena,” which opened the Met’s season on Sept. 26, nothing more than a vehicle for Anna Netrebko, the crowd-pleasing soprano whose powerful delivery and increasing mastery of bel canto style have sent her soaring into the diva stratosphere. But this dry and static company premiere of Donizetti’s heretofore rarely performed work should have much more going for it than its lead soprano, with a dramatic story (libretto by Felice Romani) about the fall of Henry VIII’s second wife and a suitably compelling score to match. Alas, as impressive as Netrebko is to behold, the Met’s new version of the opera only occasionally supports her, constrained by its drab sets, dim lighting, and dull staging. (Click here for a short video excerpt.)

Blame director David McVicar for the overall listlessness of this production, his mise-en-scène notably lacking in inventive movement or creativity in handling crowd scenes: This accounts for drawn-out moments when courtiers file onstage and off, shuffling drearily into and out of the wings like 16th-century factory stiffs. Often, they stand limply around, densely packed on one plane of the two-dimensional set, with its dun-colored stone walls and stark black-and-white interiors. Historically accurate though it may be, the scenery (by Robert Jones, with murky lighting by Paule Constable) offers little in terms of propelling audiences into the intrigues of the Tudor court. As a backdrop, it serves only to delimit the playing space; more often than not, it just gets in the way.

The cast, by and large, manages well despite the unsympathetic surroundings. Netrebko, as might be predicted, has thrown herself headlong into the coloratura title role, mastering its supremely difficult arias with ease and even stately grace, particularly in her mad scene, never overdoing the ornamentation of the high notes, and always achieving the proper volume over Marco Armiliato’s workmanlike, if overeager, conducting, which occasionally produced a few moments when the orchestra drowned out Netrebko’s fellow singers. Among these, bass Ildar Abdrazakov plays Henry with a one-note bravado, very little nuance informing his arch characterization of the tyrannical king. (It speaks to his unflinchly virile performance that the one tender moment he has comes when he stoops to pet a pair of hunting dogs.) As Jane Seymour, his paramour du jour and future queen, mezzo Ekaterina Gubanova has some thrilling solos, shaping the dread her character feels with her supple vocal flights. In duets with Netrebko, she holds her own (an achievement in itself) and the two singers reach a brilliant climax in their Act II tour de force, “Sul suo capo aggravi un Dio.” Although tenor Stephen Costello delivers a sincere performance as Percy, Anne Boleyn’s first love, his scenes with Netrebko lack emotional excitement; he might as well be singing his arias to a mirror (much more convincing is Tamara Mumford, who summons both passion and pathos in the trousers role of Smaeton). This disconnect is of course the director’s fault; McVicar, known earlier in his career for his bold re-imagining of mannered operas, is adrift here, particularly when it comes to intimate interactions (physical touch is all but avoided—no sex, please, we’re royals); when the singers do come together, their bloodless embraces appear as stagy contrivances. (Is there some unwritten law against opera singers actually kissing onstage?)

Contemplating this season opener, it seems almost as if the Met had retreated from its daring new productions of “From the House of the Dead” as well as the overdone (often dangerously so) “Ring” (with Cirque du Soleil’s Robert Lepage in unbridled gimmicky hilt), opting for a style indicative of decades long past, when a more staid presentation ruled. Has impresario Peter Gelb simply tired of risk this year, editing the slate to a bunch of traditional warhorses (including two more Donizetti works) that will draw the old-time crowds (and their lucre)? Barring Netrebko’s winning presence, this insipid production feels as if that were so: Gelb thumbing his nose at the old guard with one hand while holding the other one out to receive their gold.