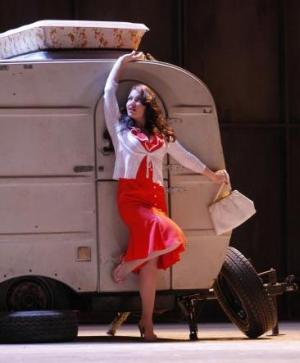 There is no denying it, LA Opera has a hit with its current production, “Il Turco in Italia.” Glorious strong voices, superb acting, and perfect casting all complement this easily accessible, but rarely seen, Rossini farce. And, did I mention it? Charming and engaging to boot. This is not your grandfather’s conception of an operatic production.

“Il Turco” is a comic opera, and the current production, from the Hamburg State Opera, plays up the comedy with gusto. If you are looking for reverence, better to pick another opera, one with a different sensibility in staging. If, however, you believe that opera should be a full entertainment, make it a point to get to the Chandler, and forgive Rossini if the rather dull overture does not immediately pull you in.

The story is silly. It is supposed to be, but the supertitles delightfully maintain the light spirit. Prosdocimo, the Poet (Thomas Allen) is an obvious stand-in for Rossini. His woes in fulfilling a commission for a five-act opera frame, and to some extent narrate, the work. Lest you be concerned, “Il Turco” is just two acts, all be it over three hours. The poet’s eyes fall first upon a troupe of gypsies. Seeing the possibilities—in opera gypsies are always good for high spirits and action—he conjures up an abused and jilted young Turkish woman hiding in their midst. Also passing by are another young woman and her lover. Of course the young woman’s husband suspects something so he seeks out a fortuneteller amongst the gypsies. Prosdocimo then conjures up the former Turkish lover. It becomes a love pentagon, rather than a triangle. Like many writers the poet creates the characters, sets the scene, and “watches” to see what they will do, nudging the action one way or the other, and in this case ending up bruised and battered himself.

As I said, it is not the story that brings the audience in, but it is the way it is played out. In Christof Loy‘s production, this setup is an opportunity for high jinks and slapstick that this cast appears to thoroughly enjoy. Lest you think that the voices take a back seat, in the role of Donna Fiorilla, soprano Nino Machaidze‘s, strong, vibrant coloratura will knock your socks off. Not backing off a single note she flits seductively about the stage, always in red, flirting with her two lovers and the audience as she cuckolds her portly and aging husband, Don Geronio (Italian baritone Paolo Gavanelli). It is easy to suspect that Fiorilla is the person whom Fiorilla loves the most. Machaidze’s voice is not that of the fragile flower you might associate with the typical coloratura. The only way I can describe it is that she flawlessly belts out like a red-hot mama, and it works. Amazing.

Gavanelli as the husband, light of foot and tongue, delivers his patter with tremendous clarity and gusto; despite the rapidity, every syllable is distinguishable whether or not the listener speaks Italian. He embraces the role of the foolish older man who, marrying the younger woman, discovers that his money will not completely hold her attention. If one can cavort in his misery then Gavanelli does so, frequently consulting the poet for help.

Kate Lindsey (Zaida, the abused and jilted Turkish woman masquerading as fortune teller) is remarkably versatile. As demonstrated in the modified belly dance she does to allure Don Geronio in for fortune telling, she clearly is trained as a dancer as well as being an internationally known mezzo-soprano.

All are wonderful actors and look their parts physically as well. Pity the poor young singer with less than drop dead looks and the multiple talents of these two sopranos. With voices like Machaidze and Lindsey’s, and the looks to match, they are a hard act to follow.

It is not just the women who look and act their parts. In addition to Gavanelli’s buffoonery, the males completely fit the bill. Perhaps the most delicious of whom is Maxim Mironov, as Don Narciso. A better name has rarely been given to a character. Along with a tremolo to mirror the coloraturas, and the ability to look good in incredibly skinny jeans, Mironov portrays the absolute self-absorption of callow youth. When he is the loser in the love battle you cannot help but hope it will be a learning experience. Even the chorus complements the stage with real acting as well as their glorious voices. As the plot winds down, the males have shifted from gypsies to very believable stagehands, exchanging looks, and just waiting to get their jobs done.

At the end of the first act Prosdocimo wonders how he will be able to keep the action going without losing the audience, and you may wonder the same. In fact, the second act does not quite live up to the first, but can be forgiven as each principal is given an opportunity for the spotlight. The arias sung by Machaidze and Gavanelli are especially engaging.

“Il Turco” is sexy and sassy without sacrificing artistic merit. Axel Weidauer’s direction is faultless. I deliberately have not described the staging as the twists and turns it takes are part of this “Turco’s” charm. Here is an opera even a dyed-in-the-wool sports fan can love. So go and enjoy.