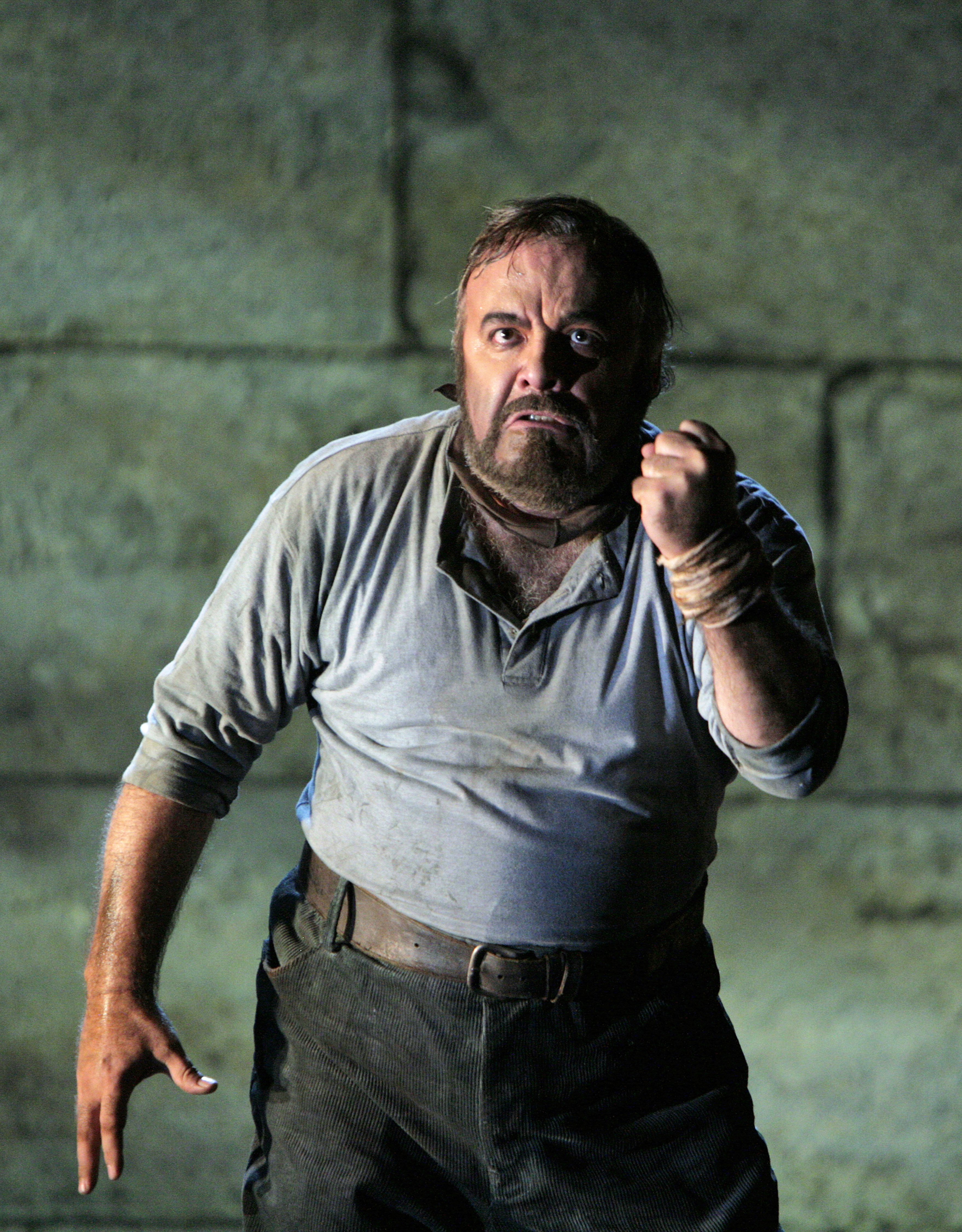 Three’s a crowd? Three strikes and you’re out? Not when the three are written by Giacomo Puccini! The master of verismo turned out a triple threat with his trio of one-acts, written in 1918, with something for everyone: steamy melodrama in “Il Tabarro,” heart-breaking tragedy in “Suor Angelica,” rowdy comedy in “Gianni Schicchi” and positively glorious music in all. Rarely performed in its entirety, “Il Trittico (The Triptych)” gets a topnotch production at San Francisco Opera this season with international superstar Patricia Racette, a product of the San Francisco young singer’s training program, singing the heroine in all three stories.

But Racette, terrific as she is as the sexy unfulfilled wife of “Tabarro,” the tragic nun of “Suor Angelica” and, more briefly, the giddy daughter of the title character in “Schicchi,” is not the only treasure in the cast. Italian baritone Paolo Gavanelli is compelling as the cuckolded husband in “Il Tabarro” and hilarious as “Gianni Schicchi,” the wily Florentine who impersonates a dead man in order to dictate a more favorable will and ends up leaving most of the good stuff to himself. Famed Polish contralto Ewa Podles makes a long-awaited San Francisco debut as the cold, haughty Princess who breaks her niece Suor Angelica’s heart and hunky Brandon Jovanovich, recently announced as the company’s Siegmund in the forthcoming Wagner “Ring,” sings Racette’s lover in “Il Tabarro.” Patrick Summers conducted them all, along with the secondary singers and the chorus, to a fare-thee-well.

Director James Robinson, with the able aid of set designer Allen Moyer and costumer Bruno Schwengl, re-imagines these stories in the (vaguely) present-day and it works. The barge of “Il Tabarro” is suggested by spare brick walls against which Christopher Marevich’s evocative lighting gives us the rippling Seine, a wooden roof, a sunken wheelhouse and trap doors through which sweating stevedores climb, shouldering their heavy loads. One of these is Luigi (Jovanovich), who has caught the eye of the barge-owner’s wife (Racette). They carry out their affair right under the jealous husband’s nose to a murderous end. “Il Tabarro” is my longtime favorite of the trio, with lush, swelling melodies that signal Puccini at his mature peak. Vocal highlights included Jovanovich’s description of the laborer’s lot, Catherine Cook’s bag lady and Gavanelli’s brooding soliloquy of lost love and jealousy.

Things are more peaceful in “Suor Angelica,” at least at the outset. Set in the gleaming dispensary-cafeteria of what appears to be a hospital for handicapped children, the opera showcases the women of the chorus as sweet-voiced nuns, singing praises to the Virgin and gossiping about the minutiae of their lives. Among them is Angelica, once a noblewoman, forced to take the veil after she secretly bore a child. She has not heard from her shamed family in seven years until the day when her aunt, the Principessa (Podles) arrives to make her sign inheritance forfeiture and informs her that her son has died. The distraught nun resolves to take her own life but, before she does, she has an extended aria that is the test of any soprano. Racette passes with flying colors. And thanks to the director for figuring out a way to make the final image, where Angelica sees a redeeming vision of her little boy, palatable. Podles is commanding; Racette is luminous; the women are fabulous. Nice work.

“Gianni Schicchi” is famously Puccini’s only comedy and it makes you wish he had written more of them. Set in a psychedelic sickroom, all black and white geometric, with the “grieving” family (they only want the old man’s money) stylishly garbed in black and white and smoking their heads off, it makes you laugh the moment the curtain goes up.  The relations drool over the riches that will be theirs but, once the will is found, it seems that the late, lamented Buoso Donati has left his fortune to a monastery. Enter Gianni Schicchi (Gavanelli), a clever upstart, formerly despised by the snooty Donatis. The corpse is propped up in front of the television set (with a cigarette in his mouth), Schicchi pops under the covers, a notary is called and a new will is dictated.

The fun of this opera always has been in the relatives, each trying to bribe their way into a lion’s share of the loot and Cook here is the funniest and most rapacious of all. The young lovers, Rinuccio (David Lomeli), the least obnoxious of the heirs because he just wants a little spare change so he can marry his sweetheart, and Lauretta (Racette), Schicchi’s daughter, have the two big lyrical numbers, his paean of praise to Florence (during which the back wall slides back to reveal a stunning scene of the city) and her famed “O ma babbino caro,” in which she pleads with her father for her lover’s sake. But Gavanelli has the stage. He is purely wonderful in the role. For his sins, Dante assigned the historical Gianni Schicchi to one of the seven circles of hell. An opera critic would surely send him straight to the other place.