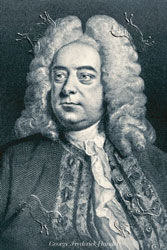 Handel wrote Rinaldo to knock &#146;em dead. It was 1710, and he had just arrived in London with a reputation as a keyboard virtuoso, mostly won in Italy. He had hung around princely courts in Germany. He was 25, and he wanted to make a splash, to conquer England at a stroke. Rinaldo, the first Italian opera composed for that distant land, did the trick. Handel, the Italified German, became not only an honorary English composer but, for nearly two centuries, the English composer.

Rinaldo was a hit in 1710 because the Italian singing style was new and arresting in England; because Handel quarried previous operas for their best tunes (not just his own operas either); and because it boasted special effects and stage machinery whose description still makes the jaw drop.

Audiences have not changed all that much: they love a show with lots of glitter and activity, and bravura singing drives them wild. If you want to do Rinaldo, you must aim for these eternal values. Frank Corsaro&#146;s Rinaldo at the Met 16 years ago, in which acrobats fought with wooden swords while cartwheeling in mid air in sync with Marilyn Horne&#146;s vocal gymnastics, would have been unforgettable even without Benita Valente and the Met debuts of Samuel Ramey and Carol Vaness. The Rinaldo that opened at the City Opera this fall was, in most respects even more delightful.

Designers Francisco Negrin and Anthony Baker utilize a series of artful geometries with Middle Eastern motifs. (Based on episodes from Tasso&#146;s Gerusalemme Liberata, Rinaldo takes place during the First Crusade.) The symbol of the Hellish power of the enchantress Armida (Christine Goerke) is a glassy cube that lights up as her lover, Argante, King of Jerusalem (Denis Sedov) croons. Armida then appears atop a far larger cube behind him; this opens to reveal a garden in the style of Persian miniatures, into which Armida lures the hapless Almirena (Lisa Saffer). Still another cube, this one turquoise and artfully lit (by Allen Hahn) to represent the sea, offers three mermaid torsos, sirens, who accost and entrap the most valiant of the Christian knights, Almirena&#146;s fiance, Rinaldo (David Daniels). Argante&#146;s Muslim stratagems are worked out on a chess board, while the counterplots of a Christian mage (Kevin Burdette) are declaimed from atop a globe adorned with cabalistic symbols. Globes vs. cubes &#150; get it?

The rest of the decor and the costumes artfully combine Muslim motifs with the gowns, wigs and furniture of 1700. Armida&#146;s boudoir is a (cubicular) Hall of Mirrors and candelabra, containing a huge baroque sofa, and a harpsichord that smokes as Armida tosses off a virtuoso riff and explodes when she&#146;s in a temper. The Christians tend to wear white, with red crosses and the odd breastplate. The Saracens get a much better deal: black leather bustiers and purple skirts for Armida, black and gold and crimson armor and cloak, with Mongolian mustachios, for King Argante. Much of the action involved threes and fours of green-wigged dancing sprites choreographed by Ana Yepes, their movements derived from court dances of the period but deployed in a modern style familiar from the work of Mark Morris. During a duet of rage for Armida and Rinaldo, six of these sprites sit on the sofa, their heads going back and forth as if following a tennis match.

Everything about this Rinaldo, in short, was stylish, witty and fun, and the fun did not descend to vulgarity or glitz.

The music was on the same high level. Audiences have changed about baroque opera &#150; fifty years ago, these operas were considered tedious and incomprehensible. Almost no one could sing this music in the proper style, with personalized ornaments to the da capo repeats of most arias, ornaments that underlined the text and the dramatic situation. No audience back then would have sat still for four hours of such formality. Baroque operas were cut to ribbons, drastically rearranged, and the roles were frequently transposed, especially those composed for castrati, usually sung by men in much lower registers or women in trousers. (Women in trousers were not a frequent sight in 1950, on stage or off.) True, Handel cut, rearranged and transposed his operas as much as anyone ever did &#150; the play&#146;s the thing, folks &#150; but he was Handel and you&#146;re not. He knew what would work, and how to fix what wouldn&#146;t. (At the City Opera, Handel operas are usually held to three hours &#150; in Rinaldo, this is done far more judiciously than was the case with the truncated Ariodante last year.)

Here is what has changed: First, audiences have been glutted with recordings and often bored with familiar works. They want novelty, but not novel sounds &#150; they want unfamiliar works composed in the past. Second, singers are now trained in vocal practices of the past (a lot of singing teachers wrote books in the 18th century), and audiences have gotten used to this style, able to appreciate its fine points. Third, directors have learned how to cut and rearrange these scores more judiciously &#150; not that they always do &#150; and also how to get singers to vary action as well as sound when ornamenting a repeat. Fourth, and not least, opera performances are titled, so that language is no longer a bar to enjoyment. (Opera in Italian outraged Addison, Handel&#146;s contemporary. The Marx Brothers didn&#146;t care for it either.) Fifth, a species of countertenors has appeared in the last twenty years who can sing the music written for castrati on the correct pitches with all the beauty, agility and, damn it, the macho of lower voices, so that grown men can now be played by grown men in these works with no loss of musical elegance.

So now we&#146;re ready for as delicious an evening as we get in Rinaldo.

It doesn&#146;t hurt that David Daniels is becoming the first male alto superstar since the last castrati left the stage in Rossini&#146;s day. Rinaldo is one of his favorite Handel roles &#150; he has recorded it with Cecilia Bartoli for Decca &#150; and these were his first Rinaldos in this country. The part includes half a dozen arias in various emotional keys: Rinaldo is a happy lover, a wretched lover, a confident fighter, a despairing fighter by turns, and he sings a happy duet with Almirena and an angry one with Armida. Duets are sadly rare in Handelian opera, a machine driven by the ego of the solo singer. Daniels, in contrast, always sings duets with an intensity of focus on his partner, as though styling and sizing his voice especially to suit hers, and both his partnerings in Rinaldo were exquisite. Solo, while the beauty of his voice was always endearing, he seemed to be holding back in slower arias like &#147;Cara sposa&#148;, and was less precise and stunning in &#147;Or la tromba&#148; than is his custom. If it was an off night, it was an off night many singers would kill for, and perhaps the City Opera&#146;s controversial &#147;sound enhancement&#148; system, which undercut countertenor Bejin Mehta in Handel&#146;s Ariodante last year, is to blame.

Lisa Saffer (Almirena), whose light, slightly acid soprano recalls the young Beverly Sills, was especially charming in &#147;Augelletti, che cantate,&#148; her song to the birds (portrayed by recorders) in the Persian garden, and in her subsequent duet with Mr. Daniels.

Goffredo (Godfrey of Bouillon, nominal leader of the Crusade) was sung by countertenor Daniel Taylor, who must feel about Mr. Daniels the way Bing Crosby felt about Frank Sinatra. (&#147;A singer like that comes along once a lifetime &#150; but why did it have to be my lifetime?&#148;) Taylor&#146;s countertenor is higher, brighter, but less sensuously throaty than Daniels&#146;. A third countertenor, Australian Christopher Josey, as Eustazio (a priest in this production, for some reason), gave a decent but unremarkable performance in such company.

A slight edge in the vocal honors, along with the better costumes and wilder emotions, went to the Saracen foe, and those who attended the performance on November 9th would gladly have awarded them Jerusalem as well. Denis Sedov, the Argante, a tall, stunning young Russian bass, moved through the plot with sinuous grace matched by his manner of ornamenting Handelian lines in a way many find startling &#150; and exciting &#150; in a low voice.

But the night belonged to Christine Goerke&#146;s Armida, a dramatic coloratura on the Sutherland model, who has never before had a role in New York into which she could properly sink her teeth. Armida is the wicked witch conquered by love for her enemy &#150; Rinaldo &#150; and Goerke lived every campy moment to the hilt. She gloried in her intimate relationship with Hell (frequently invoked), got into a speed demon contest with the harpsichord player in the pit, transformed herself into Lisa Saffer (very well staged), and danced among her skirted minions. Yet she never permitted the comedy to affect her splendid singing, by turns confident, furious and touchingly heartbroken. The voice is large, full and bright, and her ornamentation thrilled at all times. This was a star quality presentation with the star to take advantage of it at its heart.

Among the rest, Kevin Burdette&#146;s Christian mage was artful but a bit grainy, and the trio of Sirens led by Heather Buck delicious. Harry Bicket led a swiftly paced performance. The individual instruments seemed to be performing syncopated baroque dance steps alongside the choreographed attendant demons. It was elegant music, old music without a cobweb anywhere, as chic and contemporary as anyone could desire.