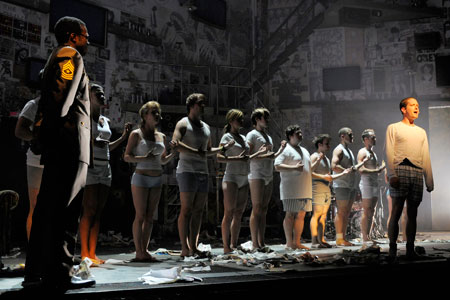 It was extended practically before it opened and on Sept. 16, the official opening night, more than 100 people were lined up outside hoping for an empty seat. Not since Stew brought his innovative “Passing Strange” to Berkeley Rep a couple of years ago has the Addison Street theater district vibrated to such a buzz.

So, how does a critic of a certain age talk about a show based on a recording by punk rockers Green Day? Surely the fact that she once saw “Tommy,” loved “Jesus Christ Superstar” and once stood through an entire Grateful Dead show with her kid isn’t qualification enough. Besides, that was all a long time ago. So it was with fear and trembling that I dutifully accepted the earplugs generously supplied by the management and took my seat for what I thought might be the scariest night of my professional life. No worries, it wasn’t and I didn’t use the earplugs after all. Yeah, “American Idiot” is loud and in-your-face. But get over it because it’s also extremely well done and terrific fun. Directed by Michael Mayer (“Spring Awakening”), who also wrote the book with Green Day lyricist Billie Joe Armstrong, it’s a 90-minute pulsating, strobe-lit stroll though America with a coterie of post-911 disaffected young people, played with energy and skill by 19 very talented performers.

At its center is the story of Johnny (the “Jesus of Suburbia” of the album, played by John Gallagher, Jr.) and his buddies Tunny (Matt Caplan) and Will (Michael Esper). Fed up with watching television and hanging out, Johnny and Tunny strike out for the Big City, leaving Will at home with his pregnant girlfriend (Mary Faber). The rest of the show – taken from the band’s 2002 hit album which director Mayer describes as a rock opera just begging to be staged, as well as a few songs from the forthcoming “21st Century Breakdown” – follows Tunny into the army, where he is wounded, Will into an ill-fitting fatherhood and Johnny, alternating between the heights of first love and the depths of drug use. The former features Rebecca Naomi Jones as Whatsername, the girl and the fantastic Tony Vincent as St. Jimmy, Johnny’s drug dealer and, perhaps, alter ego. Also outstanding is Joshua Henry in a bravura turn as an Army recruiting officer, billed as The Favorite Son.

The set design, by Christine Jones with able help from lighting designer Kevin Adams and video and projection wizard Darrel Maloney, is almost a character in itself. A rough, stage-high wall is imbedded with video screens that, in the show’s eponymous opening number, feature hilariously competing messages, political, advertising and showbiz, all equally banal as the cast members sit, stand or lie around, dumbly transfixed. Little wonder that Johnny screams out against the establishment: “Don’t wanna be an American idiot …part of the redneck agenda.” As the song ends, all the screens switch to the American flag, hitting us in the face with irony. Later in the show, we get illuminated messages like “Help me” and a few others not fit for print or video projections of a performer who is singing, as if we were at a rock concert (which, in a sense, we are). In one stunning sequence the screens fade out entirely as a surreal skyline of New York City takes over the background.

The music may be loud but it’s good and the lyrics, when you can hear them, are often poetic. The original Green Day (Armstrong, Mike Dirnt and Tre Cool) has been replaced by an onstage band, under the direction of Carmel Dean and the energetic choreography is by Steven Hoggett (a dream sequence featuring the wounded Tunny and An Extraordinary Girl, danced by Christina Sajous, is a high point – literally – as the pair soar and swoop in the air above the stage). Green Day got its start on Gilman Street in Berkeley and now it too is flying high. The staging of “American Idiot” may mark another milestone on its journey. Next stop Broadway?