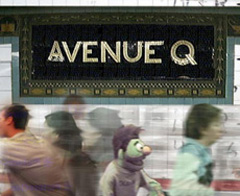 Avenue Q is an unalloyed, call-all-your-friends-and-rave, delightful, joyous, enormously entertaining hit. Bring out the critic’s big box of laudatory adjectives–in this show it would be a talking box perhaps called Big Box and it would sing a witty or touching or wry song, operated by a multi-talented actor/puppeteer.

On an imaginary street in a very real city a lovable gaggle of young people seek their destinies, drawn to this street because it is the last holdout of affordable rents for folks just getting started. That’s the imaginary part–the affordable rents part. The street set, showing the dilapidated fronts of three buildings, looks like Elmer Rice’s Street Scenecould be played there.

The action begins when Princeton, 22 years old and the proud possessor of a BA in English, arrives to start his adult life. Anyone who has ever been 22 and had such a degree in their back pocket knows that the big-bucks jobs don’t exactly beat a path. Princeton sings: "I can’t pay the bills yet/Cause I have no skills yet/The world is a big scary place." Most everyone in the audience has been there, done that, and will identify big time. Princeton meets his neighbors and a lovable lot they are, some of them made even more lovable by the fact that they are puppets.

The puppets look oddly familiar to anyone who grew up watching the Muppets, or is even vaguely aware of them. They are handled with consummate skill by the actor/puppeteers who breath life into them. Princeton meets Kate Monster, his next door neighbor, and they fall in and out and in love, and he begins to have one young-New Yorker experience after another in a world that is a delicious mix of pithy reality and hilarious fantasy. The Muppets have grown up.

The music is lively and toe-tapping, and the lyrics are anything but off-the-shelf. Each song is a gem, treating with wit such subjects as coming out as a young gay, racism, the complexities of loving someone you sometimes hate. "Everyone’s a Little Bit Racist," "There is Life Outside Your Apartment," "I Wish I Could Go Back to College" stand out. Perhaps the funniest is a song that explores the word for the day, kids, and it’s called "Schadenfreude," a lively ode to the sin no one ever admits committing: finding pleasure in the misfortune of others.

The songs work so well partly because they’re so good, but also because–actors, director, musicians, sound-system be praised–all the lyrics, every word, are clearly understandable. This, as anyone who has ever sat in a theatre wondering what the heck the singers are singing about, is not always the case.

The actors, some of whom have extensive puppet backgrounds and some of whom are making their off-Broadway debuts, are winsome and wonderful. John Tartaglia is Princeton in a winning performance that makes the audience want to take the character out for a good meal and a bit of avuncular advice. Stephanie D’Abruzzo plays two very different roles–Kate Monster, Princeton’s girl friend, and Lucy, the buxom blonde floozy who complicates matters for the two young lovers. D’Abruzzo is simply brilliant, an actor with ample comic skills and a strong singing voice. Look for her name in lights.

Jordan Gelber and Ann Harada are two of the three actors who are not also puppeteers. Harada is brilliant in her song, "The More You Ruv Someone," as is Gelber in "I’m Not Wearing Underwear Today." Natalie Venetia Belcon plays Gary Coleman–no, not a Gary Coleman-like character, but the real guy–working as a super nowadays and bemoaning the fact that he’s washed up at fifteen. It’s a tough role and she pulls it off with panache. And, wow, can she sell a song!

Each member of the creative staff has pulled off a coup. Director Jason Moore has joined the puppets and the people seamlessly, with one side-splitting moment of humor after another. Ken Roberson’s choreography is lively and energetic–this is exactly the way puppets would dance with humans. Anna Louzos’ set and Mirena Rada’s costumes serve the play perfectly, and add more than a little wit and humor of their own.