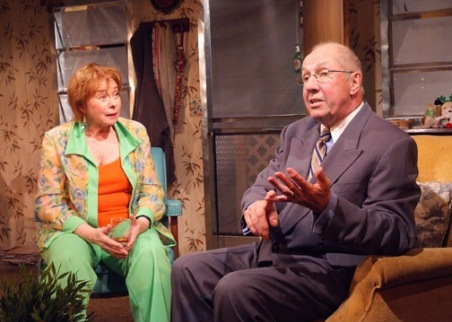 Yum. Or maybe I should say, Wow! I could stop there, but you probably want more detail. To start with, the Fountain Theatre has once again taken its impossible layout and transformed it into a wonderful set. It is perfect as the quintessential rundown trailer filled with kitsch from a Hello Kitty toaster, to a god-awful clown painting, and a front door wind chime fashioned from empty beer bottles. Need more details be supplied? Well … if you insist …

Accomplished playwright and director Stephen Sachs has taken the bones of a true story and turned it into a sharp comedy with a sneaky social commentary subtext. Maude (Jenny O’Hara) is an unemployed, bourbon swigging, loudmouth, no-apologies-offered, aging specimen of trailer trash living in Bakersfield, hardly the culture capital of California. She thinks, she doggedly hopes, she is on to something that will change her life. Priding herself in having furnished her trailer from dumpsters and second-hand shops, she has bought a painting for $3 intending it as a joke birthday present for one of her neighbors. Maude hates the painting. Another friend has said it looks like a Jackson Pollock, and Maude is off and running.

Today is the day life could turn good. Maude has contacted Lionel (Nick Ullett) who has flown out from New York on the “foundation’s private jet.” He has an art pedigree that starts with his upper-class accent and impeccable suit, and continues through his long resume of prestigious curatorial and editorial positions. Should you forget, he will remind you of all of them. He is there to pronounce her painting either an authentic Pollock or a piece of crap. (Excuse me, that is Maude-speak.) He is there to pronounce her painting authentic or a forgery. He bristles with discomfort over even having to be in such surrounds. Before he even looks at it, you have no doubt what his verdict will be.

In 1994, Yasmina Reza wrote “Art” about a Frenchman who has bought a large expensive painting that is essentially white. The hit play hinged on a very French, and ultimately destructive, discussion between three friends about the new canvas and what is art. “Bakersfield Mist” travels some of the route and raises some of the same questions, but it is far more entertaining and thought-provoking in the end.

In a museum or an art gallery you have probably overheard (or been a part of) a couple’s conversation where one contemptuously says something like, “If I had painted that you wouldn’t hang the blasted thing in the house, would you?” or stronger words to that effect. The others’ response is generally a combination of embarrassment and self-righteous disdain. Imagine that dynamic in spades with Maude’s crass, alcohol-loosened tongue, and Lionel’s stuffed-shirt, lofty arrogance.

In real life, Ullett and O’Hara have been married for years. Their onstage timing reflects the kind of chemistry that takes years to build. A knock-down, drag-out, chair-toppling fight, choreographed by fight director Doug Lowry, includes that timing and an exquisite sense that these two, on the far side of middle age, have their heart and soul in it, even if hand-to-hand combat is nowhere in their history. They are a dynamic pair and I would rush to see any performance featuring the two of them. “Bakersfield Mist” at the Fountain is the first in a series of productions, to take place as readings in theaters across the United States under the umbrella of the “National New Play Network.” Given any professional reading, Sachs’s writing is strong and would certainly be enjoyable. However, it is hard to imagine it packing as much of a punch as the production with O’Hara and Ullett.

Historic note: Once upon a time, a truck driver from Bakersfield did buy a big painting in a junk shop and devoted herself to finding someone who would authenticate it and bring her fortune. Not too long ago, The New Yorker magazine published a story on “connoisseurship.” It revealed how the art world is beset by self-anointed experts whose pronouncements can change the value of an object from millions to dirt and vice versa. The Rand Corporation dressed Joshua Bell in the rags of a homeless person and sent him off to the streets of Washington, D.C., to play his Stradivarius. No one noticed him. These are not urban legends. “Bakersfield Mist” tickles the parts of us that want to deflate the stuffed shirts If you have ever set yourself out as an expert, that part will be tweaked, too.