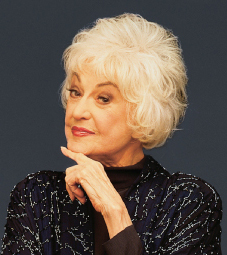 The feeling a theatergoer has as Bea Arthur sings, jokes, and tells her stories is that earlier that day there was a message on the answering machine or an e-mail with an invitation to drop by Bea’s apartment. Billy Goldenberg will be there lounging on the piano bench, a few old friends, and–by the way–a theatre full of other folks, all friendly folks, old friends in the mood for fun. The hostess will be barefoot and in a loquacious mood.

Loquacious and funny, charming, delightful, tuneful, and full of more or less gently gossipy stories (the raunchiest with no names mentioned) and sly by-play with old chum Billy. It’s one of those evenings in the theatre that evokes all the highly complimentary adjectives and prompts immediate phone calls to recommend it to everybody.

Arthur opens with a straight faced and absolutely hilarious recitation of a recipe for leg of lamb (and closes with what to do with the leftovers) that could be a master class for would-be comic actors demonstrating that anything, yes, anything can be funny in the hands of an old pro who has been paying attention all these years.

Bea Arthur is 78 years old, with all the heart and enthusiasm of the girl she describes (a long-ago Bea Arthur) going to drama school and cattle-call auditions. Anyone who misses this delightful invitation for an evening in her presence will regret it. As Maude might put it, "God will get you for that, Walter."