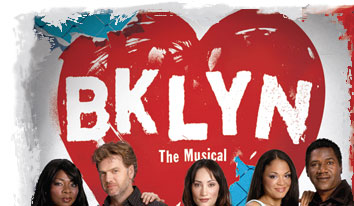 They say right up front that they’re telling a fairy tale, so the warning flag is flying–Brooklyn the Musical has its heart in common-denominator inspirational material. But, make no mistake about it, it does have a heart. The plot premise of a young Parisian woman coming to Brooklyn to find her long lost father practically semaphores sappiness, and yet, to its credit, this first outing for Mark Schoenfeld and Barri McPherson manages to stay within manageable levels of schmaltz, plugging in just enough harder-edged material to provide needed balance. (Reviewed from a preview performance, it is just possible that that balance may improve further by opening night.)

Shrewdly staged in a smaller theater, and with a cast of just five, Brooklyn the Musical accomplishes an intimacy generally lost in big musical productions. The connection between the talented cast and the audience is palpable and the audience responds with notable enthusiasm. In a venue this size, the relatively lower overhead should give the show the needed time to find its market and then it just might run forever.

Brooklyn (Eden Espinosa) is the name of the aforementioned central character. Her mother, Faith, hung herself when the father Brooklyn never knew disappeared out of her life. Raised by the Sisters of Charity, Brooklyn is sweetness and charm, innocence and determination, but, most of all, she’s Espinosa’s big voice which, with "Once Upon a Time," brings down the house. "I believe in miracles…I believe anything is possible," the lyric insists, but the listeners believe in the terrific performance, the corn be damned.

Leavening the proceedings is the character of Paradice (so named because she was born with a pair of dice around her neck). She’s cynical, street-wise, out for herself, a sometime hooker in short shorts and high boots, with a smart mouth and no scruples. As played by Ramona Keller with a contagious grin and perfect timing for the comic twist, she is irresistibly funny and has a voice to match Espinosa’s. Keller’s a Whoopi Goldberg with lungs.

The third principal is the Streetsinger (warm and big-voiced Cleavant Derricks) who carries the narration and adds a touch of self-referential irony to the show which has the salutary effect of lightening the ever-hovering gooiness. The cast is rounded out by Kevin Anderson in the underwritten role of Taylor, Brooklyn’s father, and Karen Olivo in the smaller role of Faith. None of the characters undergoes change over the course of the story, but the plot demands that Taylor must. The role needs considerable rethinking and beefing up to save the ending from its current unconvincing anticlimax.

The setting, a street corner under the Brooklyn Bridge, is an imaginative rendering of brick archways, skeletal steelwork, a street light, smoke floating up from a grating, a chain link fence, and the obligatory graffiti. The ingenious and witty ways that set designer Ray Klausen changes scenes within that framework are an important plus. Along with the equally original and witty costumes by Tobin Ost, the design becomes another element that helps significantly to lift the show to drier levels.

The score is filled with appealing melodies, mostly a sort of 70’s light rock with an overlay of soul. There’s not much fresh or new to it; it all strikes the ear as vaguely familiar. John McDaniel’s smart orchestrations and arrangements make it sound a lot better than it is. But that’s plenty good enough to give these young singers a chance to let it all out and they are fully up to the challenge.

Brooklyn the Musical is a great example of Broadway professionalism morphing some unexceptional material into a successful evening’s entertainment.