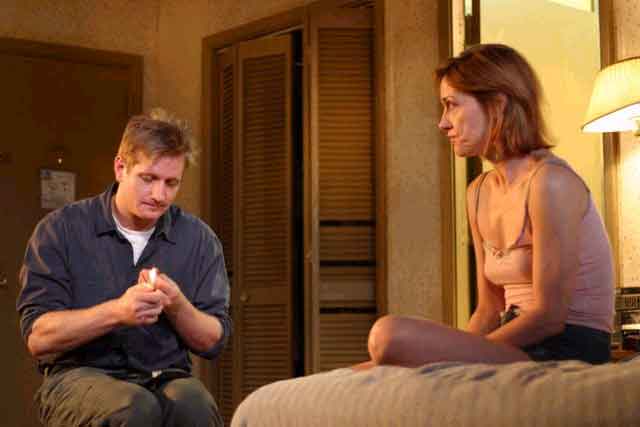 The telephone rings. You pick it up. No one there–or maybe the light click of a hang up on the other end. Who called? Why didn’t they speak? Why did they dial your number if they didn’t want to speak? If it happens once, no big deal. If it happens repeatedly, a somewhat paranoid response is understandable.

Agnes White, a cocktail waitress living in a seedy motel room, is pretty sure who’s calling her–her ex-husband, Goss, just released from prison after serving a term for armed robbery, a red-necked one-time truck driver, a wife-beater, a violent bully. Agnes is right to be afraid.

But where is the line between legitimate fear and neurotic (or psychotic) paranoia? In a time when surveillance cameras seem to be everywhere, when identity theft is an everyday crime, when a nominally democratic government assumes ever more intrusive powers (in the name of patriotism) and seizes control of what vestiges of personal privacy remain in a high-tech age, a degree of fear seems rational and caution makes sense.

Bug, a powerful play by Tracy Letts, is a crescendo of mushrooming paranoia, a dramatic inquiry into the boundaries of sensible response and irrational madness. Agnes (currently played by Kate Buddeke) doesn’t have a whole lot going for her. She and Goss had a young son who inexplicably disappeared. At 44, she’s withdrawn into booze, weed, coke, and a life without commitments, fearful of yet more pain than she has already borne. Now she’s lonely and emotionally needy, but cautious about allowing herself to become vulnerable.

Enter Peter Evans (Jonno Roberts), an attractive, intelligent, but strange young man, apparently a fugitive. He needs a place to stay and Kate, in her neediness, is responsive to his tentative advances. Peter reveals his story–he claims to have been the victim of medical experiments while in the Army and he’s gone AWOL to escape. Then he finds aphids in Agnes’ bed. By the beginning of the second act, the motel room has become littered with fly paper, chemicals, a microscope. Agnes, who has fallen for Peter, gets caught up in his reality. Outside reality is brought to bear (Agnes’ visit to a dermatologist; the arrival of the Army doctor who was treating Peter), but paranoia prevails and continues to envelop the two of them leading to a horrific conclusion.

The tiny stage of the Barrow Street Theatre is transformed effectively into the motel setting, enhanced by Brian Ronan’s imaginative sound effects–from well chosen country-western songs to humming cicadas, to the sounds of passing trucks and a helicopter clattering overhead. The current cast convincingly draws the audience into this hellish milieu, most notably Jonno Roberts, who lends the necessary credence to Peter’s persuasive ways. (There is nudity and violence, both indisputably appropriate to the content.)

Letts’ special accomplishment here, in addition to providing strong characterizations, is the way he unspools Peter’s obsession so as to leave deliberately ambiguous where the truth lies. That Peter’s story can even be considered a possible reality (as vs. utter paranoia) is a function both of the playwright’s skill in the telling and his acute awareness of the psycho/political/technological environment of our times. By its conclusion, Bug leaves a mesmerized audience both emotionally drained and thoughtful about its cautionary message.