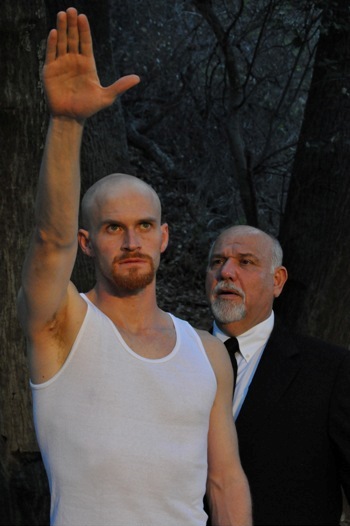 By David Gow
Directed by Kalo Gow
With Alan Blumenfeld and Mark Cecil
The Will Geer Theatricum Botanicum, Topanga Canyon, Calif.
Through Oct. 13, 2012

From our earliest school days we grow up hearing that every accused person is entitled to a defense. If you are like most of us, one of your earliest philosophical ponderings was probably something along the line of “How can a lawyer stand to defend a guilty person?” A slightly more sophisticated corollary to that conundrum might have been, “What if Hitler lay bleeding on an emergency room gurney. Would a doctor have to treat him?”

In “Cherry Docs” playwright David Gow grapples with these issues. The action is set in Toronto. Jewish lawyer Danny Dunkelman (Alan Blumenfeld) is assigned by Legal Aid to defend racist, anti-Semite, skinhead Mike Downey (Mark Cecil) who has been accused of murder. There is no issue about guilt. Mike, wearing his steel toed Cherry Docs (Doc Martins), repeatedly kicked an Asian man in the head, sending him to the hospital. The victim died three weeks later. Is this homicide murder 1, murder 2? Or is this manslaughter? Danny is not exactly thrilled with the assignment. Mike’s doctrinaire, robot-like, skinhead arrogance makes remorse seem a non-starter. Danny tells Mike he will take him as far as the first hearing, and then he will decide whether or not to remain on the case. Mike needles Danny about his liberal ideals and beliefs. Predictably, Danny eventually gets Mike to re-examine his hate-filled belief system and Danny’s liberal armor is breached, his less-restrained and less-attractive side burning through.

Dramatically, the conversions of the two characters are poorly substantiated. Unconvincingly Danny ponders the symbolism of, and elaborates metaphorically about, his father’s tallith, which pulls him back into his Jewish history. Ironically it may pull him back, but it does not lead him to any apparent higher level of humanity. Mike goes from passionate recitations of his skinhead creed to reading the victim’s last words of forgiveness, choosing instead a redemptive path. Though Blumenthal and Cecil created individually convincing characters, there was little chemistry evident between the two actors. It appeared as though director Kalo Gow just let each do his own thing. Productions at the Theatricum benefit from its exceptional setting. “Cherry Docs” basically takes place in the prison visiting room and requires little in the way of set. The simplicity works well in this stunning venue.

Potentially there is plenty of material to work with, but unfortunately playwright Gow seems stuck at the intellectual depth of a bright middle-school student. To a non-lawyer, “Cherry Docs” does not hold water legally. To the two lawyers who accompanied me, it failed the test miserably. Gow appears to have written his play without consulting a lawyer. It is pretty basic: do not answer police questions without counsel, and do not write a legal drama without legal counsel. Whatever you say may be used against you. Got it?