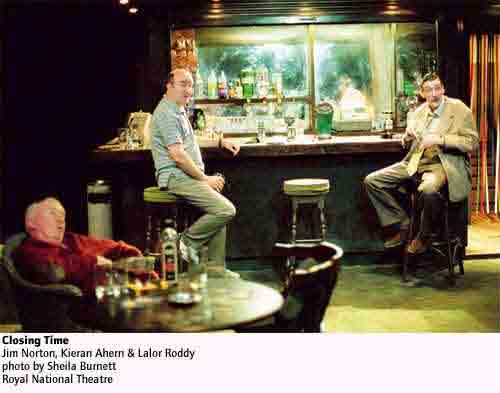 If the rapid-fire, razor-sharp, razzle-dazzle spectacle of Steppenwolf&#146;s production of Glengarry Glen Ross was the highlight of the Dublin Theatre Festival for some, they might have done well to see the unfolding of the desperate, on-the-edge lives of a group of quieter but no less damned men (and one woman) in Owen McCafferty&#146;s Closing Time. The setting is a hotel on the back streets of Belfast, the former site of a bomb blast: now rebuilt, but barely alive. The play begins with two characters in situ as the audience enters the theatre: owner Robbie (Jim Norton) and permanent resident Joe (Lalor Roddy). Both men are asleep in their chairs in the pub. The shutters are down, the lights are low, only the sound of traffic on the street is heard.

Eventually Vera (Pam Ferris) arrives downstairs in a state of semi-undress, accompanied by Iggy (Patrick O&#146;Kane), who has clearly spent the night with her. Vera is Robbie&#146;s wife and co-owner of the Hotel. She assures Iggy, who is eager for a morning eye-opener, that Robbie will not wake up until she throws up the metal grille guarding the bar. Vera invites Iggy to retire back upstairs for a little while, but Iggy would prefer to start his day on the note on which he intends to finish it, by getting drunk.

Closing Time is a strong naturalistic drama set in a dark world of dying people in a dying place. A sense of sluggish alcoholic stupor hangs over every scene. Hopelessness and despair are the dominant emotions, barely contained by constant topping off with alcohol but which eventually, inevitably, give way to violent explosions of rage and hatred. Plot and characterization are beautifully interwoven by dialogue and acting which aspires to naturalistic transparency. McCafferty creates a strong ensemble of characters here and matches and pairs them off for scenes of exposition and confrontation which flow perfectly from one moment to the next. There is a deep richness of lived experience on stage, a sense of people and place which allows a great deal of context and backstory to make itself known without disrupting the story. The plot is simple, but impressively complex in minor detail. It comes to a conclusion with a symbolic closing down and descent into darkness represented by Robbie locking up the doors and turning of the lights while silently sobbing.

"Closing Time tells the story of those who didn&#146;t cope, those who didn&#146;t move on," says the program notes. It is tempting to read in this statement a kind of critical attitude towards the troubles and the peace process, or to interpret the play in the manner of a theatrical allegory for Northern Ireland&#146;s attitude to political progress. While such a reading may be justified, it is far from definitive. The twin demons of Irish culture, alcohol and politics, are present in this world as they should be but they inform the action rather than define it. The effects of paramilitary violence are felt by all of the characters, yet, as is revealed, the troubles which affect them are of a far more personal and immediate nature. The bombing of the pub may have been the beginnings of the slow death of these characters and this place, but the reasons have less to do with politics than with the weaknesses of human will. Drink hangs like a vulture over every shrug of the characters&#146; shoulders, and yet the play is nothing close to a &#145;message drama&#146; about alcoholism either.

No single character comes to dominate or epitomize the concerns of the play. Each actor is completely convincing in creating a rounded and believable person whose story unfolds throughout. Iggy seems to have a wife at home whom he is reluctant to phone for obvious and not-so-obvious reasons. O&#146;Kane plays the character&#146;s progressive intoxication with a mixture of pathos and humor, but eventually succeeds in holding the balance with the difficult final scene of Iggy literally crying into his pint before being ejected from the bar by Robbie. Joe, it turns out, has a house across the street from the Hotel in which he as not set foot in several years (since the departure of his wife). Roddy registers a sense of collected calm which initially makes you wonder why he remains part of this world. The actor conveys a since of wounded pride and inert resolution which explains his presence though and eventually also justifies his character&#146;s decision to abandon his old friends after a desperate plea for money from Robbie and a startling revelation from Vera in the midst of a drunken outburst of anger.

Robbie and Vera have a combative partnership built on mutual self-interest and a dependence on the readily available stock of their bar. Their financial troubles are mounting, and given the amount of free sampling going on by both staff and customers, this is unsurprising. Norton and Ferris are superb at portraying this vengeful, loveless marriage, and both of them have powerful moments together and individually. A fifth character arrives later, the child-like Alec (Kieran Ahern), a former milkman ("or postman, or something") shot in the head by paramilitaries and never the same since. Alec becomes like a metaphoric beacon for the play&#146;s sense of stasis: a broken, lost mind single-minded focused on mundane tasks (cleaning, feeding Joe&#146;s cat, watching TV) but harboring deep pain and potential destructiveness. Ahern&#146;s acting and, more importantly, the ensemble&#146;s treatment of his character, prevents this role from becoming too obvious or from standing out from the naturalistic palette.

James Kerr&#146;s direction is unobtrusive and Rae Smith&#146;s lighting is so low-key as to make it seem as though the audience is straining to see through alcohol-fogged eyes of their own.