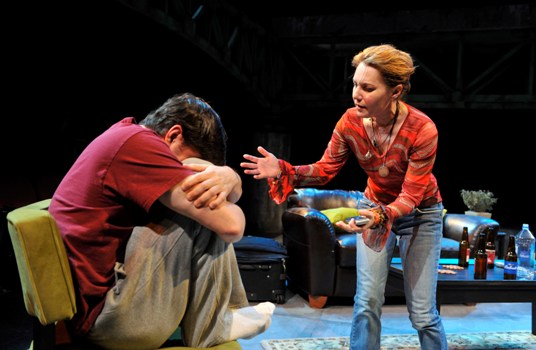 Aw shucks! They told me it was going to be a comedy. The advance material, the reviews hung prominently near the theater entrance, the happy, expectant faces of the sell-out audience all signaled funny. But, in spite of the numerous laugh lines and bizarre plot twists, I found Aurora Theatre’s world premiere of “Collapse” to be somewhat sad. Certainly not a tragedy (except in the final moments), but far from a hilarious farce.

Playwright Allison Moore uses the metaphor of the 2007 Minneapolis bridge disaster to illustrate the falling-apart lives of the people in this well-acted, impeccably directed character-driven play. And what has happened to them is no laughing matter. Hannah (a marvelous Carrie Paff) longs for a pregnancy ever since a miscarriage two years earlier. She’s fixated on fertility treatments. An associate lawyer, she has been losing clients in the bad economy and fears for her job. Her husband David (Gabriel Marin) is falling apart. His car fell off the bridge when it collapsed and two years later he still suffers from post traumatic distress syndrome. He has nightmares and night sweats. He can’t go to work. He can’t ride in an elevator or drive on a freeway ramp. He’d like to drink but his digestion can’t take it so he opens a succession of beer bottles daily and pours much of the liquid into a spindly house plant — which is showing the effects. He is lethargic and totally disinterested in the whole fertility thing.

Into this mess lands Susan (indispensable Bay Area actress Amy Resnick), Hannah’s New Age ditzy sister from L.A. who really has lost her job and is homeless to boot. Dragging an enormous suitcase, she moves in – apparently for the duration. Anybody laughing yet? Actually, Resnick probably is the funniest thing in the play, spouting aphorisms, doing yoga in the middle of a crisis and sharing a good deal of that beer with her brother-in-law (who doesn’t really like her very much) while Hannah is shuffled off to a support group that David doesn’t want to join.

Enter Ted (Aldo Billingslea), an affable sex addict who is something of a catalyst for them all. Ted, who meets Hannah when she gets the support group meeting rooms mixed up, is as laid back as she is wound tight with the effort of holding her life together. Antagonists at first, they bond over coffee and then the trouble begins. A mysterious package, a return to the broken bridge and a sojourn in the police station later and it’s all wrapped up in an hour and 20 minutes. Director Jessica Heidt, who is artistic director of Climate Theater and former associate artistic director at the Magic, keeps it all moving at breakneck pace, in short scenes and blackouts (lighting by Heather Basarab). Melpomene Katakalos’ set design, a broken bridge hovering over the stage which converts from a condo to a coffee shop, park and police station, is arresting and Cassandra Carpenter’s costumes, from Hannah’s chic lawyer suits to David’s sweats and Susan’s funky ensemble are appropriate. And, to repeat, the acting couldn’t be better.

It’s just not my idea of a comedy.