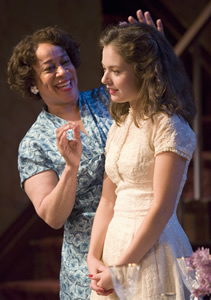 Come Back, Little Sheba, was an unequivocal hit when it first opened winning William Inge the George Jean Nathan Award and earning him the title of most promising playwright of the 1950 Broadway season. Sheba is currently recreated at the Kirk Douglas on a splendid period set by James Noone. But there is no getting around it: a hit from almost 40 years ago can seem dusty when trotted out again despite eternal themes. Adding to the challenge of dialogue from another period, which seems strangely stiff now, is the casting of an interracial couple having no connection to the story line and rendering the suspension of disbelief a long shot.

Lola and Doc had a shot gun marriage 25 years ago when then pretty Lola discovered she was pregnant. Doc – now a chiropractor – dropped out of medical school, the pregnancy ended in a miscarriage, he found solace in alcohol, she found little solace in housewifery and plunged herself into needy dependency. Sheba is the long lost dog she hopelessly calls for. Almost one year into Doc’s sobriety they are clearly the mismatch of the century. A fresh faced, flirty young boarder becomes symbolic of what might have been. Doc has the relapse anyone could have predicted and which Lola feared. The results are dire. He is chastened, revealing Doc’s real dependence upon Lola and her inner strength.

S. Epatha Merkerson is every bit the frumpy dependent housewife with little interest in domestic duties; missing the days when she was a pretty young thing; and hanging on the comings and goings of their student boarder. Unfortunately, except for the volcanic relapse scene, Alan Rosenberg as Doc is not in Merkerson’s league as a stage actor. Only in an alcohol fueled rage does he seem authentic or really apart of the action. She alone cannot carry him along and it leaves the audience to ponder other things such as how likely is it that there would be no racial overtones with this mixed race couple in what was likely an all white, middle-class, mid-west neighborhood, in 1950? One has to applaud Director Michael Pressman’s willingness to apply colorblind casting. But it can only work with actors who are equally strong; better yet, in a dramatic setting that is more likely to be colorblind. Perhaps a contemporary, urban, blue-state milieu would blur the line more successfully. However, the story of Come Back, Little Sheba, is not set in a blue-state milieu and not set in 2007, and Rosenberg is not the equal of Merkerson, hence the problem.

Brenda Wehle as the neighbor, Mrs. Coffman, Matthew J. Williamson as the milkman, and Lyle Kanouse as the postman, all capture the period, conjuring up the apparent ease of neighborhood life in the early ‘50’s: the stay-at-home woman who knew all the delivery people (and they knew her and her foibles) and the neighbor who, though critical, was a daily fixture in the woman’s life. All are involved to a greater or lesser extent in each other’s lives. When they are on stage they help Merkerson breath life into Sheba.

Jenna Gavigan, the co-ed boarder Marie, and the two men in her orbit – Josh Cooke, the sexy hunk of the moment, and Bill Heck, the successful boyfriend back home whom she is going to marry – bring youthful magnetism to the stage adding substance to Lola’s trying to live her own life through the young woman’s escapades. Rosenberg, however, was not even able to convince one of his longing for the pretty young thing under his roof.

Sheba, if you are going to come back, please do it with everyone pulling his oar and do not throw in quirky casting which makes the sometimes stilted dialogue even less likely to come to life. Ms. Merkerson, you deserve better.