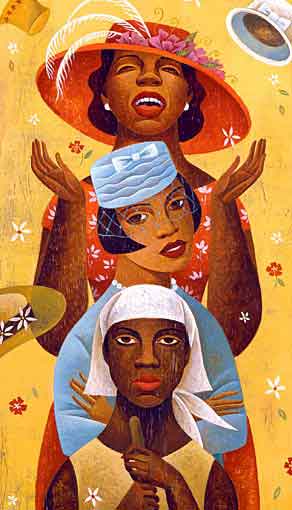 In the southern community that is represented in Regina Taylor&#146;s musical Crowns, the word on the street is our crowns have been bought and paid for, all we have to do is wear them. And these words, like a proclamation from the Almighty, literally enframe and crown the stage of Arena&#146;s Kreeger Theatre in Washington, DC. This is the story of Yolanda, a street-smart kid from Brooklyn sent by her mother to her grandmother in Darlington, South Carolina, after her beloved brother Teddy is shot in the head and killed by a so-called friend.

In this one-act multiple scenes play that evolved first from the photographs of church-going African-American women by Michael Cunningham and subsequently from the accompanying oral histories by Craig Marberry, playwright Taylor captures a cut of the cultural heritage of Black Americans that reaches through slavery in the United States back to Africa. Although Yolanda is looking for answers concerning the loss of her brother, these gospel-singing, Sunday-go-to-meeting folks are so unhip that even her new school peers laugh at her cornrows and baseball cap worn backwards. Little by little, through down home stories and events, her grandmother and women friends, all wearing hat creations that make them stand up tall and confident (kudos to costume and hat designer Emilio Sosa), reach out to Yolanda who eventually shows her acceptance by embracing the word of the Lord through a river baptism.

Lively word play and banter garner center stage attention in Crowns, including made-up words like hattitude, rap numbers sung by Yolanda, and anecdotal teasing. An older woman tells the story of her younger sister who hated to pick tobacco because she said it hurt her back. The punch line, delivered with I-know-better attitude, was she was too young to have a back. The anecdote, which is funny in its bittersweet delivery from the older sister who had performed more years of backbreaking work, reverberates against Yolanda&#146;s story. Yolanda says as the play opens that her brother had her back. The irony, of course, is Teddy couldn&#146;t protect himself, let alone his little sister, and that Yolanda was too young to have a back as bull&#146;s eye for New York hoodlums.

One other use of words by Regina Taylor, who also serves as the artistic director of this production, is the projection of scene titles. In lieu of a curtain, words such as Prologue, Morning, Morning Service, Jumpin&#146; the Broom, Funeral, Recessional separate the scenes. In most instances, the spoken text cues the audience that a scene change, or new oral history, is about to commence, and, therefore, the projected words unnecessarily draw attention away from the actors.

Working from a set that might be described as the Lord&#146;s hat shop (since only angels could reach the pedestals on which most of the handsomely designed hats perch), the cast of six women and one man provide a hand-clapping, foot-stomping set of performances. Desire DuBose punctuates her portrayal of Yolanda with convincing teenage body language showing how cool she is from a New York perspective&#151;she drags on an imaginary joint, she jabs her leg at an unseen assailant with a kick boxing move, she petulantly balls her fists and pounds the air when things don&#146;t go her way. Lynda Gravatt as the preacher&#146;s wife reigns as the Hat Queen who lays out the rules about not touching her hat and how to hug a woman wearing a large brim. She says, I&#146;d lend my children before I&#146;d lend my hat. My children know their way home!

With aplomb, John Steven Crowley plays all the men&#146;s roles from red top-hatted griot preacher to the angry husband of a woman who keeps sneaking new hats into their overcrowded home. He also performs hip-hop with Yolanda and jumps with the percussionist who is stationed stage right. In fact, David Pleasant, the percussionist and collaborative arranger of some of Linda Twine&#146;s original music, might as well be considered part of the cast. His performance in We&#146;re Marching to Zion is so physically jubilant that he steals some of the attention from these excellent actors who consistently deliver the playwright&#146;s message that African Americans earned the money to pay for their crowns, but at a great cost.

For most scenes, the action moves along spiritedly and the variety of subject matter&#151;ranging from an undertaker figuring out how to accommodate a dead woman wearing her favorite hat in the coffin to the confession by the Darlington women that it took a civil rights movement to get hats off their heads&#151;holds the attention. Since the playtime runs just under two hours without an intermission, some cutting would benefit the overall enjoyment of this uplifting holiday offering.