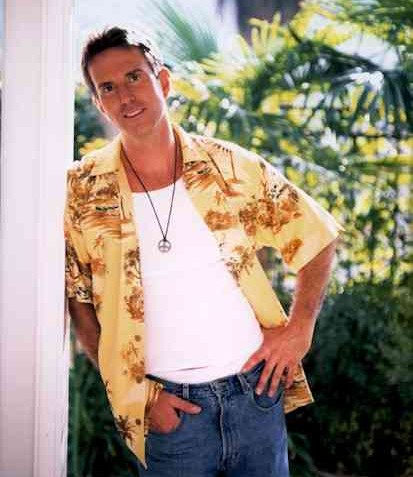 Davis Gaines is a Broadway musical star, widely know for his portrayal of the title role in the wildly successful musical, The Phantom of the Opera. He played the role of Anthony in last year’s concert version of Sondheim’s Sweeney Todd, winning more fans with his rich baritone voice and engaging onstage presence.

But there’s a big difference between performing on stage and performing in an intimate cabaret setting. On stage, the performer is physically separated from the audience. In the large theaters that house big musicals the actor must project both voice and acting broadly, reaching out to the distant corners of the balcony; subtlety is not the name of the game. In an intimate club, a big voice is not a particular requisite; it doesn’t take much in a small room, especially with amplification, to sound like a belter. On stage, the actor is in a role defined by a script, placed in the context of a larger theatrical experience. In cabaret, the focus shifts to the phrasings of songs, the intelligent delivery of a balanced and varied program, the way the artist connects directly to his listeners.

Gaines’ debut at San Francisco’s Plush Room last night was a decidedly disappointing affair.He acknowledged that he and the three musicians backing him up had met just that day and the program was clearly underrehearsed. Undoubtedly the performance will improve over the course of the engagement, but to open on such a note smacks both of unprofessionalism and a lack of respect for the paying audience.

Opening with Carole King’s "Will You Still Love Me?," Gaines immediately displayed his preference for croony, romantic songs, which he gives an almost invariably croony, romantic reading. Starting small, he built in volume, occasionally displaying a wide vibrato. Cabaret favorite John Bucchino was represented with two songs, ""Not a Cloud in the Sky" and "Unexpressed." Gaines handled these sophisticated lyrics well, as he did Amanda McBroom’s"Dance."

By now, however, a certain sameness was evident in the programming. Gaines admitted to the audience his predilection for songs of "drama and angst," and the entire evening was overweighted in such material. Gaines failed to give sufficiently unique readings to each to make then stand out individually. And when he opened up that big voice, the sound took on a harsh edge and rather overwhelmed the small room. (Later in the evening he held the mike much lower and the result was significantly improved.)

Gaines is just about to release a new CD, a collection of Sammy Cahn songs and he included a selection of those in the show: "I’ll Only Miss Her," "Saturday Night," "All the Way." But it was with a novelty song by Zina Goldrich and Marcy Heisler, "The Morning After," that Gaines made a real mark. It’s a funny, ironic song with quick, almost patter-speed, lyrics. Gaines navigated the lines skillfully, articulated clearly and put his acting skills to work. It was the most alive moment of the program and the audience responded accordingly.

The it was back to the love songs with Rodgers and Hart’s "My Romance" and William Finn’s "Infinite Joy," the latter once again too big in its climax, overwhelming the small room. For his first encore, Gaines apologized for singing "I Left my Heart in San Francisco," but he gave it a thoughtful reading and made it sound fresh. Finally, he sang Cahn and Van Heusen’s "All My Tomorrows," a rather anticlimactic closing.

Gaines starts out with the important plusses of a strong instrument, acting skills, and considerable personal charm. But a successful cabaret act needs a wider variety of material, material tailored for a small venue, and a sense of pacing, all of which were seriously deficient in this show.