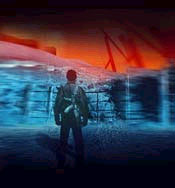 Comedian Stuart Carolan&#146;s first play is a surprisingly dark and intense thriller set in 1980s Northern Ireland. Five years after the celebrated 1981 hunger strikes and in the midst of the paranoia surrounding the "supergrass" informers in the Republican movement, a Republican family in South Armagh faces a turning point. Dairy farmer and father of two, Joe (Gerard McSorley), is a local brigade commander for the IRA. He is eager to ensure ideological continuity in his household. His eldest son Thomas (Laurence Kinlan) is an active volunteer, though he still mourns the loss of his younger brother Seamus a year before.

The play opens with the youngest son Danny (Shane Corcoran) playing "Biggles" under the kitchen table, leading to a confrontation with Joe over this apparent hero worship of a British character. Thomas sticks up for Danny, but also pledges his loyalty to the cause, a loyalty which is thrown into relief when the family retainer/handyman Barney (Tom Hickey) is suspected of being an informer after a series of operations go wrong. A sinister IRA investigator (Frank McCusker) is brought in to sniff out the traitor, and the questions he asks begin to gnaw away the edges of familial loyalty.

The title comes from an amusing bit of mistaken identity where Thomas was inadvertently named for Sir Thomas More instead of St. Thomas Aquinas because of a ward sister&#146;s error, and the play&#146;s suggestion that the designation of "defender of the faith" carries several levels of responsibility is central. Precisely what "the faith" is remains to be determined, and the honor of martyrdom reserved for Sir Thomas More may come to unexpected people for reasons which have more to do with preservation of the self than preservation of the cause.

There are plenty of metaphoric sub-texts to Carolan&#146;s play, though there is nothing in them we haven&#146;t encountered before. Colm T�ib�n writes in the program of the continuity of theme through Yeats, Friel, Carr, Synge, and Frank O&#146;Connor, and indeed there are shades of all of these and more in here. "A great deal of Irish writing in the twentieth century has dealt with and dramatized the dark crossroads where violence and a visceral urge towards cruelty meet," says T�ib�n, and from the play&#146;s opening the audience is again immersed in this familiar mindset.

The immediate question this raises is of the applicability of this vantage point to a twenty-first century perspective on Ireland in contemporary Irish theatre. In the age of McPherson, MacDonagh, and Mark O&#146;Rowe (Crestfall), have the frames of reference shifted sufficiently to leave Carolan stranded somewhere between Guests of the Nation and Playboy of the Western World as a vision of what constitutes personal and political drama?

In itself Defender of the Faith is certainly formally unremarkable. It is presented in a traditional, naturalistic style and built around a series of simple character scenes which build nicely towards an unfortunately rushed climax that fumbles the plot at the crucial moment. The final two scenes are overly hasty in bringing matters to a predictable close, forcing the writer&#146;s hand into overly obvious and overstated resolution. Thematically overly familiar also, the play seems determined to overcome its lack of an original point of view by doing what it sets out to do as well as it can. The final two scenes notwithstanding, it is a solid piece of commercial theatre, boasting strong performances and quite a lot of on-stage tension. On this level, it works well enough, but the lack of a satisfying wrap-up leaves it falling short of its potential.

Gerard McSorley has made a name in film playing hard and cruel characters (Veronica Guerin, The Boxer), but he manages to put a slightly sympathetic spin on the characterization of the controlling father, Joe. His casual profanity and almost constant hostility is shown to have roots in understandable insecurities, and though his response to the situation is not ideal, it is clearly not without subtlety. Twenty-one year old Laurence Kinlan (On Such As We) bears the weight of the central role well, though his anger sometimes lacks emotional nuance and his final tearful soliloquy is not wholly justified by the rushed climax. Tom Hickey (The Cherry Orchard) does bring nuance to his characterization of the suspected traitor, veering from clownish superficiality to frustrated torment before his final, gut-wrenching moments. Frank McCusker (The Wild Duck) also makes a very strong impression as the IRA inquisitor. His performance adds immensely to the mounting tension, and the play notably suffers when he is absent. Young Corcoran alternates with Mark McGroarty in the role of Danny, but Corcoran certainly manages his opening scene well as he moves from playing childish games to professing a heartfelt, behaviorally-reinforced hatred of a nationality he knows nothing more about than a child really could.