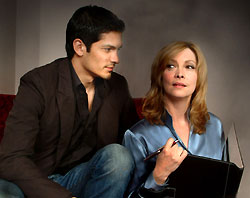 In a world where bare bottoms and bare breasts can be glimpsed on billboards and in family newspapers, and clothing is at its most titillating ever, there is a countervailing PC force afoot on campuses and in workplaces.Long overdue strictures against sexual harassment have been enlarged to forbid consensual relationships between consenting adults in those contexts.Nowhere have the limits been more severe nor the answers more murky than on college campuses. The potential for the abuse of power by older faculty members (generally assumed to be male) preying upon students (assumed to be young females) has transformed the enforcement of sexual harassment regulations into a kind of in locus parentis not seen since the 1950&#146;s.

Off campus, these same rules have denied the reality that single professionals with billing requirements of 2000 hours or more per year have little opportunity to meet partners elsewhere.As the powerful have taken advantage of inferiors, many a lasting relationship has also begun as a workplace tryst or a student-teacher romance.

In Dialectics of the Heart, the line between what is the rule and what should be the rule is explored through the teachings of philosophers from Plato to Hegel and played out between Professor Elizabeth Drewer (Sharon Lawrence) — forty years old, beautiful, articulate, obsessive about her career, with the moral concreteness Piaget ascribes to a six year old — and graduate student/teaching assistant 28-year-old Richard Amado (Nicholas Gonzales) — enthusiastic, charismatic, unfettered by boundaries, anddrawn to the university to study at her feet.

Three other professors who are more comfortable in realms of gray are the supporting cast. Barbara Biden is an African American, earth motherprofessor of Social Anthropology so warmly played by Carlease Burke that there is an irresistible impulse to go to her dressing room at curtain and say, "girl, when can we have coffee together?" Philip Monohan (Joel Polis) is a Philosophy Department colleague sanctioned by the faculty committee after Professor Drewer reluctantly testified she had seen him kiss a student.And Marshall Heughins (Peter Husmann) is the beleaguered ex-husband of Drewer, a chemistry professor attracted to her by her mind and ultimately exhausted by her intensity, now married to a less complicated woman.

From her lectern, Elizabeth begins Philosophy 21 &#150; a survey course where she opens her examination of the rationalists with &#147;how do we know what we know?&#148; She is the archetypal lecturing professor, thoroughly informed in her field, articulate to a fault, organized and focused on her goal of imparting her knowledge to the sophomores before her.Richard leads the discussion group, the teaching assistant who gets students fired up. He crosses the line into the familiar or mildly profane, and elicits original thought.Both alternately address the audience as their class and the contrast is bold.Each captivates in his or her own way; either would be the teacher remembered years hence.Stamos is a playwright who knows her philosophy well enough to make both subject and drama come alive.

Elizabeth and Robert&#146;s relationship is a dialectic in a dictionary sense: &#147;The contradiction between two conflicting forces viewed as the determining factor in their continuing interaction.&#148; Elizabeth&#146;s strict reliance on rationalism is articulately, endearingly and enthusiastically attacked by Robert&#146;s contention that reason is not enough.She seduced him long distance by her writings before they ever met.Almost like a rambunctious, large, loving puppy he pulls her from her rigid podium into the imperfect real world.

The ending may stray too close to the classic "Girl Meets Boy" format, but the journey is challenging and entertaining.No one&#146;s intelligence is insulted and no one can leave the theater without mulling over where the line should be drawn between sexual harassment and relationships between consenting adults.