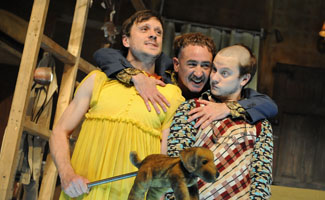 “The Walworth Farce” almost defies description. Perhaps best likened to the work of Martin McDonagh (“The Beauty Queen of Leenane,” “Pillowman,” “In Bruges”), it is at once very funny and savagely cruel. And, of course, very Irish. You may love it or hate it but you won’t walk away indifferent. I was moved in the theater and strangely haunted after I returned home. Playwright Enda Walsh (you may not have heard of him but he’s huge in Ireland) has wrapped his tragic tale in the trappings of traditional farce – cross-dressing, slapstick, mistaken identities and rapid-fire entrances and exits – but a tragedy it remains.

Dinny (Michael Glenn Murphy) has kept his two sons virtually prisoners in a London flat since they were little boys (think Jaycee Lee Dugard). The younger son, Sean (Tadhg Murphy), is allowed to go out for food once a day. And then he scurries right home. The elder, Blake (Raymond Scannell) is afraid to go out at all. His father has represented the streets of London as hostile and full of terror. Only the mythical Cork, from which they have fled, is “safe.” Every day the little family of social misfits reenacts the story of the father’s escape and the events that led up to it. Daddy is the director as well as the author and he insists on slavish adherence to the script. Any deviation is punished with invective and blows. There is a prize for the best actor, a trophy which Dinny always wins. Like many of us, perhaps like Ireland itself, they are stuck in their story. As one of them puts it: “This story we play is everything.”

It’s all reasonably well and good until reality comes knocking at the door, in the form of the supermarket checkout clerk (Mercy Ojelade), a kind, and friendly lass come to give Sean his groceries after he grabbed the wrong bag by mistake. The father may spin his web of deceit but Sean, deep down, remembers what he saw back in that cottage in Cork when he was five-years-old. And when his father tries to take Hallie, the clerk, hostage as well, forcing her to participate in their little drama, Sean finds his backbone at last – with tragic and violent results.

Director Mikel Murfi has orchestrated the production with precision and wit and the cast is flawless. Winner of the 2007 Edinburgh Best of Fringe Award, the show has played in Dublin, Galway, London and is presently on an extensive tour of Canada and the U.S. Australia and New Zealand are on the itinerary for 2010. Shure and it would be a cryin’ shame to miss it while it is here.