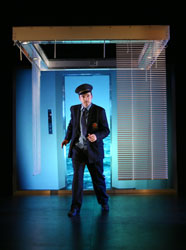 With the new shows, ‘Desire’ and ‘Fashion House,’ the telenovela at last crosses over into the English language market this year as American networks look to cash in on audiences’ penchant for escapist television. The popularity of these serialized shows in Latin America is enormous and with its production of the engaging comedy, El Conquistador!, New York Theatre Workshop celebrates this melodramatic, over-the-top medium. The play, created by Thaddeus Phillips and Tatiana Mallarino and directed by Ms. Mallarino, is even performed in Spanish, with English surtitles.

The show’s premise is simple. Polonio, a star-struck coffee bean farmer moves to the big city in search of his favorite telenovela star. He arrives in Bogota and takes a job as a doorman in a big building where he is quickly entangled in the affairs of the residents.

The action of the play takes place mostly at the front desk of the building, though there are a charming prelude and prologue that occur in the Colombian countryside. From a large video screen behind Polonio’s post, various location backdrops are projected. (A similar device appeared in the Broadway show Ring of Fire but did not work as well.) In addition, several of the building’s residents appear on the screen and interact with Polonio on the intercom. One would be hard-pressed to find a theatrical production, on Broadway or off, that uses video as effectively or as ingeniously as El Conquistador! The front desk swings around 180 degrees in both directions and when it does, the video also follows so that the audience sees the lobby from every angle.

As played by the talented Thaddeus Phillips, Polonio is a familiar comedic stock character – a hapless, bumbling hero who finds himself in outlandish situations. Mr. Phillips is a gifted performer and his style and appeal are reminiscent of the great Mexican comedian, Mario Moreno, better known to the Spanish-speaking world as Cantinflas. Mr. Phillips, like his superstar predecessor, is a clown, an entertainer and a satirist. As he explains in the prologue, the enormous popularity of telenovelas can cause an entire country to come to a complete stop, especially on the nights of the grand finale to the story. The great irony of they play is that Polonio is a poor peasant whose little village is ravaged by war and drug trafficking but can think of nothing except his beloved telenovela.

Eminently likeable, Mr. Phillips speaks fluent Spanish and has great comedic skills. He also has an uncanny timing that allows him to interact with the video screen as though it were another character in the play. Jaws dropped as Mr. Phillips’ perfectly choreographed entrances and exits made him appear to actually be walking in and out of the screen. Technical wonders aside, the action of the play follows telenovela form, with outrageous characters, crazed villains and evil twins who appear mysteriously. The use of video, particularly the taped pieces from the building residents – Colombian telenovela stars in their own right – enhances the play and adds an authentic flavor to the story.

As a native speaker, my one minor quibble with the production was with Mr. Phillips’ accent, which came in and out in certain scenes. One wonders what a true Colombiano might do with the part. However, his earnest and otherwise convincing performance quickly won me over. And as the play builds to its inevitable outrageous ending and given the increased physical demands of the quick-paced finale, his performance became more impressive.

El Conquistador! is a terrific take on the zany world of Latin American soaps. Although, it could use with some trimming – some of the gags are repeated one time too many and the convention of the video footage grows a tad wearisome at the end – Mr. Phillips works hard at keeping the action brisk. His wacky running about, quick changes and changing personas are a wonder to watch. Like watching a telenovela, one must give in to the insanity of it all to enjoy it fully.