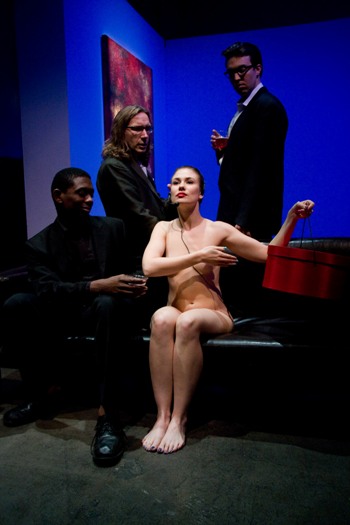 How does this strike you? You are in a slick contemporary gallery, Track 16, Bergamot Station in Santa Monica. You are sitting on chairs placed on bleachers, surrounded with a show of strikingly displayed abstract paintings by Cameron Jordan, and a full sized shiny 1940’s diner against one wall. Three pale young women— not a ripple, tan line, or blemish on a one of them — totally nude, hair severely pulled back, obviously miked, and carrying bright red hat boxes, walk in coolly and precisely, arranging themselves on the pedestals in the center of the gallery. They speak in monologues, surrealistic strings of words, some based on thoughts by such diverse heads as Aristotle and Beyoncé, Francis Bacon and George W. Bush, but you will miss most of the references without the help of an addendum to the program. Some lines are simply alliterated strings. The words flow on together like streams of consciousness; the women’s miked voices adding to their expressionless tones and faces. Perhaps the most relevant statement made by one of them is “Art is purposeness without purpose.” I do not know who said that originally.

The play does not so much begin as it seeps onto the floor of the Track 16 Gallery. This is opening night of an art happening entitled “Art is About Cows: An Installation Inquiring into the Nature of Art and Objectification.” The women are hardly cows. Four men wander into the gallery wearing a variety of rumpled black suits, shirts open at the neck. It is clear from their language they are here to pick up babes; that is it … period … it is their raison d’être. These are not art buyers. Babes, just babes, oh and the cheap (Charles Shaw) free wine, are why they have come. The two-buck Chuck is served by two attractive, world-weary waitresses in five inch heels with chrome platforms, lace leggings, black short sheer costumes, and bright red, tiny feathered hats perched on their flowing hair. They are as much stunning art objects as the women of the happening and as uninterested in the art as the guys are.

The title, “Filthy Talk for Troubled Times” broadly hints of the buyer-beware dialogue to come, and Neil LaBute sets the pace with more “fucks” per minute than you might have thought possible in any conversation you are likely to overhear on land. They tentatively examine the nude women, but receiving no response become more absorbed in competitive macho bravado, each boasting of his conquests and prowess. All are disgusting and repulsive. Neither the real live nudes nor the waitresses get their serious attention. LaBute has the reputation of being a misogynistic bad boy of American theater; he began writing drama as a worshiper of David Mamet. But the question is, is he the misogynist or is he actually making the point that this male behavior is disgusting? Man 3, Troy Dunn, delivers a line that just about sums it up, “Women are not sex objects, they are objects for sex.”

Intrigued so far? Let me add some background. LaBute wrote “Filthy Talk” in 1989. It was set in a strip joint, not a classy art gallery. The strippers had no dialogue. It has also been staged in a scuzzy bar. What marks this staging as different from the others is the brilliant and meticulous production by Artistic Director Frédérique Michel, and the nude women’s additional dialogue by Producing Director Charles A. Duncombe. There are meaningless movements and words, but nothing is superfluous. It is hard to imagine finding LaBute’s original dialogue (simply composed of the empty boasting of the men, and the whining of the waitresses) interesting without the juxtaposition of the supposed art happening conceived, written and designed by the Michel/Duncombe team. This production is Dada or Surrealism, call it what ever you like. “Filthy Talk” takes a poke at the art world and its often decorative pretensions; and the world of male/female relations it presents is “Men Are from Mars, Women Are from Venus” on steroids — mega steroids.

Is there a story? As a matter of fact, no. Does that matter? I am not sure. That is probably in the eye of the beholder. If you are easily offended or if it is important to you that there be a story arc …. better try something else. If what you are after is a short (75 minute) stunning and provocative production that leaves you asking questions as you leave, this is your ticket. I think you will be intrigued.