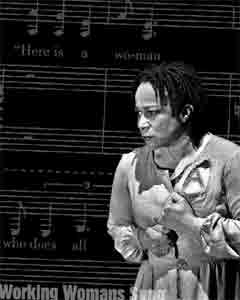 In the fall of 1988, as part of what was called a "fringe series" dedicated to providing "an innovative alternative to mainstream theater,"a play opened in a tiny theater in downtown Brooklyn with an evocative and ambiguous title, Imperceptible Mutabilities in the Third Kingdom. Its neophyte author was a 20-something African-American woman, Suzan-Lori Parks, and word soon began to spread among those interested in new theater that something extraordinary was on view across the bridge. And, indeed, most of those who made the journey to see the play had that rare experience of hearing a genuinely original if difficult new dramatic voice, one often surreal, oblique, non-linear, but one undeniably suffused with the thematic fervor of African-American and feminist protest drama. As with, say, the very early fragmentary plays of Sam Shepard, the play-goer wasn’t quite sure what was seen and heard, but nonetheless was bowled over by the sheer theatrical force of visual and verbal imagery.

Now, some fifteen years and more than fifteen plays down the line, Ms. Parks has more than fulfilled her promise to become one of our preeminent dramatic voices, the first African-American woman to win the Pulitzer Prize for last year’s Topdog/Underdog. Her current play at the Public Theatre, with the consciously provocative title of Fucking A, may well be her best work yet. A prime example of her creative fecundity, it turns once again for its source to an acknowledged literary classic–Nathaniel Hawthorne’s The Scarlet Letter–as a base from which to riff on themes of freedom and entrapment and the Black presence in America, a history seen as an absence since our national mythology has been created by whites.

Parks’ first "A" play, In the Blood (1999), contemporized Hawthorne’s classic tale of Puritan adultery and guilt: This new Hester, La Negrita, is a homeless woman, with five bastard children from different men who have abandoned her, struggling to survive in a hostile urban world. Living under bridges, denying herself sustenance to feed and maintain her brood, she gets no succor from those ostensibly dedicated to alleviating her impoverished situation: street doctor, minister, welfare worker all fail her, using her desperation as an opportunity to use her, invariably sexually. Striving to "get a leg up," Hester is time and again pulled back down. "My life’s my own fault," she admits, "But the world don’t help." The accumulation of indifference and disregard leads to a violent, tragic conclusion.

In Fucking A the "A" exposed on this Hester’s breast stands not for Adulterer but for another profession despised by its oppressive society: Abortionist. Though the Hester plays share central focus on an oppressed woman, (both with a Latina best friend) they are stylistically quite different. If not naturalistic, In the Blood was rooted in a recognizable contemporary urban world. Fucking A has no specific historical grounding: Set in "a small town in a small country in the middle of nowhere," it is a dark fable, a mythic parable in an echt-Brechtian style. Indeed, it has a small Weillian band playing jazzy Weillian music. Ms. Parks has herself composed brief sardonic songs for her characters with titles like "Working Woman’s Song" or "My Little Army." The world revealed in the play is bleakly dystopian, a world of naked power, arbitrary imprisonment, sadistic bloodiness, a world in which matters of sexuality and fertility must be spoken of in an alternate, invented language (translated on over-stage screens).

But for all its Epic theatre parable style, Fucking A is direct, visceral, compelling, ultimately extremely moving. Hester Smith works at the abhorred but essential task of abortionist, saving every penny to pay into a "freedom fund" to ransom the son she has not seen for 20 years since he was imprisoned as a boy for stealing a piece of meat from a rich family. The "rich bitch" who betrayed him has grown up to marry the vicious "Mayor," in reality the head of state. But she too suffers because she cannot produce an heir. When Hester arrives at the prison to pay for an afternoon picnic with her incarcerated son, she finds that the price has risen. But when she returns with more money, the plot then takes an operatic turn. The beloved son is mistakenly pronounced dead, which breeds in Hester a thirst for revenge which she indeed executes on the First Lady who condemned him, not realizing she is aborting her own grandchild. For, in reality, the good "Boy," who has been turned into a "Monster" by his oppression, has escaped and succeeded in impregnating the supposedly barren First Lady. Inevitably, he is brutally tracked down by a sadistic pack of Hunters. Caught and severely wounded, Monster is given by his mother the coup de grace with a knife thrust across the throat that she learned from her butcher lover.

Worthy of Webster and Tourneur, the play works the way the great Jacobean revenge plays work. For all their out-sizedness these characters are all too credible and the evil that engulfs them is palpable and ubiquitous. Much of the credit belongs to an excellent production by Michael Greif which never loses the forest for the trees. A dazzling array of theatrical and scenic effect (Mark Wedland brilliantly exploits the idiosyncratic Anspacher theatre space) is never permitted to overwhelm the primary tale. The acting of the large cast is uniformly first-rate, led by a brilliant performance in the lead role of Hester by S. Epatha Merkerson. More of a survivor than Hester La Negrita, this Hester has the indominablity of Mother Courage, but is not above the saturating bloodiness of her culture. Hester Smith cannot escape the willfullness of self-delusion even as she feverishly washes the blood away.

The other great performance belongs to the talented Mos Def as her son. Rapper Def succeeded in bringing an authentic street energy to his performance as Booth when he replaced Don Cheadle in the Broadway version of Topdog. He has an uncanny ability to simultaneously project sweetness and threat, sadistic anger and vulnerability, qualities essential to his complex character. His death scene in Fucking A is a tour de force.

By final curtain, the play is sanguinarily awash. The peerless Parks can be faulted in this one regard: she mistitles her Hester plays. Hester Smith’s play with its aborter, monster, butcher, hunters should be called In the Blood. Hester La Negrita–with her five children by five different men and her universal sexual exploitation–belongs in a play called Fucking A.