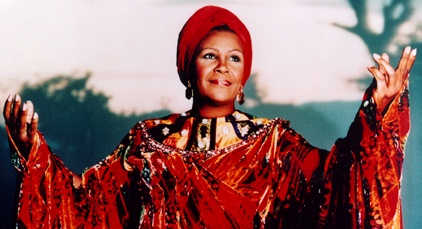 Queen Esther Marrow and the Harlem Gospel Singers are billed as "The World’s Greatest Gospel, Jazz, Blues, R&B, and Soul Show." Are they? No. Are they very good? Yes, indeed. Is this a small distinction? Well, yes and no.

Anyone who knows gospel understands that at its best this music comes from the heart. The simplicity and repetition of the musical phrases are meant to make it easier for the audience to get to the underlying message. That message is love, acceptance of fate, and joy in the rapturous world that awaits us once we give our souls to the Prince of Peace. Put this message, plus a great choir and smoking band, into a storefront church or a crowded theater, turn up the tambourines, piano, and voices, and it would be difficult for anyone not to be swept away by the engine of salvation. As Mahalia Jackson said, "If you feel blue and sing the blues, when you’re done you’ll still feel blue. But if you’re blue and sing gospel, when you’re done you will feel lifted."

The problem, and it’s a slight one, is that show-biz has rules too. One is hype. If you’re going to claim to be the greatest, you’d better back it up. But Queen Esther is barely visible in her show, until the end. She is a good singer and a decent enough preacher. But God Herself might pale before this excellent band and choir, who have apparently been assembled from among the best gospel performers in America. So the lifting in this show does not come from the Queen, and it makes the show’s pacing somewhat awkward. The Vegas-like medleys don’t lift, they distract. Just about the time you settle into a groove it’s snatched away and you’re taken somewhere else.

That wraps up the negatives. Higher and Higher has a lot going for it. In the first act Darin Myers’s version of the Sam Cooke classic A Change Is Gonna Come is gorgeous and soulful. Pianist Anthony Evans performs an absolutely rollicking version of Sit Down, You’re Rockin’ the Boat which leaves us gasping for breath as the curtain comes down before intermission. Evans plays gospel piano like John Henry swinging nine pound hammers. Power, astounding virtuosity, and did I say shmaltz? Yeah, plenty of it, and all of it wonderful.

Act Two begins with a beautiful version of When We Were Kings, sung by Marrow and choir, and then a series of spirituals capped by a fabulous version of Oh, Freedom, by amazing soprano Cassandra White (the smallest singer on stage, with the biggest voice). Queen Esther comes out for her round of preaching and singing at the end of the show and is enjoyable to watch. At times she growls like Mavis Staples, and at times she gives a hint of the jazz singer she must have been when discovered years ago by Duke Ellington. I ain’t gonna say her age, and she wasn’t about to tell us, but she was 22 when the Duke found her, so you can add it up yourself. She is a beautiful, regal woman still, and whether in her red robes or sequined blue gown, she commands center stage the little that she is on it.

You will be lifted by this show. It will feel good. But you will not need to be carried out of the theater with two sisters fanning your brow. You will walk out under your very own power.

(27355)
$9.99 (as of January 24, 2021 - More infoProduct prices and availability are accurate as of the date/time indicated and are subject to change. Any price and availability information displayed on [relevant Amazon Site(s), as applicable] at the time of purchase will apply to the purchase of this product.)

$5.87 (as of January 24, 2021 - More infoProduct prices and availability are accurate as of the date/time indicated and are subject to change. Any price and availability information displayed on [relevant Amazon Site(s), as applicable] at the time of purchase will apply to the purchase of this product.)

(20793)
$7.99 (as of January 24, 2021 - More infoProduct prices and availability are accurate as of the date/time indicated and are subject to change. Any price and availability information displayed on [relevant Amazon Site(s), as applicable] at the time of purchase will apply to the purchase of this product.)
related posts