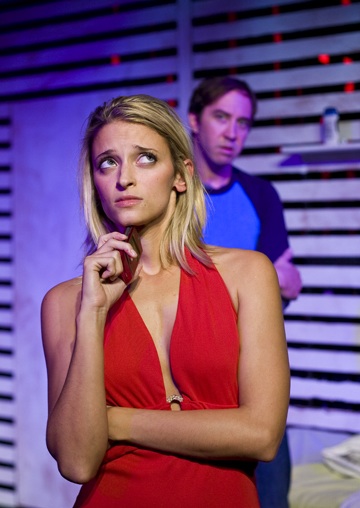 Horse Head Theatre Co. launched their inaugural season with Adam Rapp’s grim drama, Red Light Winter, not exactly a first out of the gate play, but Horse Head has little interest in doing anything aligned with the status quo.

Rapp’s play roughly follows two old college chums, Davis and Matt, first in Amsterdam, where Matt is suffering from a combination of a loss of a will to live, a woman and a successful play. He’s terminally emerging only to submerge. Davis, a cocky but rising book editor, brings home Christina, a prostitute, to cheer up his sad sack of a buddy. What a chum. She falls for the creepy one. Matt, the word nerd, falls for her, and the rest doesn’t turn out well for anyone. Rapp’s deliciously rich banter drives much of the play. Dialogue, both hurtful and playful, establishes the strained but dependent relationship between these two. Matt may be a walking stereotype and Davis, a feral savage, but these are over-educated men of letters, so when the words fly, they are hilarious.

The second act takes place in the East Village in Matt’s drafty garret. Christina returns looking for Davis, finds Matt still pining for her, and more trouble follows. (A sick girl knocking on the door of a starving artist seems like an odd nod to Rent. Rapp is Anthony Rapp’s brother after all.)

Troy Schulze (Matt), Drake Simpson (Davis) and Amy Burn (Christina) are perfectly cast in their respective roles. Schulze’s depressed playwright just tears us apart. He’s damaged, broken, yet incredibly endearing as the poster child for tortured poets. Simpson gives Davis a sexual charge that is both repulsive and seductive,  stomping on his pit bull character with a manic glee. We hate him but laugh at his jokes anyway. Burn’s gentle performance contains a wide-eyed innocence. She’s positively luminous when she sings for the smitten duo. The potency of this motley triangle carries the play.

Kevin Holden’s close to the nerve center direction hones in on Rapp’s brand of despair. The claustrophobia is palpable—tension, difficult pauses, jagged edges, all intact and adding to the closed-in hotel room stuffiness. In addition to Holden, Anthony Contello, Frank J. Vela, Elisabeth Meindl, Matthew Schlief, Andrew Harper and Robert Thoth contributed to the set and lighting design, which proved mostly effective. It’s bleak, intimate, in your face, too close for comfort and full of garish lighting effects. How Amsterdam-y.

As for the Horse Head approach, that’s another story. Theater goers are greeted by a party atmosphere found in a holding pen, where they can drink, visit, and listen to  Holden’s audience re-education lecture. Tight quarters, in an airless room, prepare us for Rapp’s shut-in world. Next, the audience is led through a narrow hallway complete with Amsterdam ladies of the red light district, and finally into the space where we were encouraged to mingle about the denizens of Amsterdam. Habit doesn’t change that quickly and most just grabbed a seat. There was no intermission for this two-plus hour long play, which meant the audience suffered through a rather clunky scene change. (Rapp’s play could have benefited from a breather.) Actors and designers are listed as “collaborators” and there’s not a bio to be found, which goes against the collective manifesto. Horse Head aims “to create the same amount of ecstasy as the artists that create it,” a noble goal for certain. (The beer menu needs to expand before that happens.) It was all kind of strange, and strangely exciting. Change doesn’t come easy, so bravo to these bold folks who dare to rethink and repackage the way we experience  theater.

All in all, Rapp’s play under the house of Horse Head goes down much like the Tom Waits songs that serenade us intermittently, with a bittersweet pathos, a ragged lullaby equally designed to soothe and unsettle.