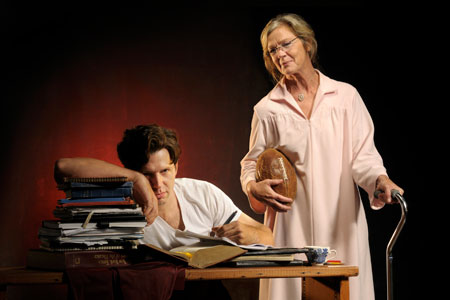 Tyler Pierce (left) and Linda Gehringer star in the world premiere of Bill Cain’s
“How to Write a New Book for the Bible.”
Photo courtesy of kevinberne.com

‘How to Write a New Book for the Bible’

A funny play about dying? A slightly irreverent play written by a Jesuit priest? Yup, “How to Write a New Book for the Bible,” having its world premiere at Berkeley Rep (in association with Seattle Rep) is both those things and more. Bill Cain (“Equivocation” and television’s “Nothing Sacred”) tells the simple story of his family — if any family’s story can really be said to be simple — in the context of the family stories in the Bible and, in doing so, manages not to be preachy and frequently to be hilarious.

Deftly directed by Kent Nicholson, who directed Cain’s “9 Circles” at Marin Theater Company, this is a lovely little tale whose charm lies primarily in the forthright believability of its narrator, named appropriately “Bill Cain” and played superbly by Tyler Pierce. Billy — as he is called by his mother (and called pretty often as it turns out), an ordained priest and a scriptwriter in New York, has come home to care for the aging, ailing and widowed Mary (an engaging and powerful Linda Gehringer). Summoned in place of his older brother Paul (Aaron Blakely) who has a “real job,” he ends up staying almost a year once she has been diagnosed with liver cancer. Mary is as tough as her son is easygoing and she has him at her beck and call 24/7. Except she’d rather have Paul — or so Bill thinks. The older brother, for his part, is sure that Bill was the favorite. A painfully scarred Vietnam vet, he has moved to El Paso to live his own life.

“If you want to see God, look at your family,” says the narrator of this loving memoir. “And not just the good stuff.” The Cains can fight— oh Lord, can they fight — but they do it within rules laid down by their father, Pete (Leo Marks), now dead and seen in both flashback and the visions that his wife has of him. Pete is a nice guy, patient, with a sunny outlook, the loving glue that keeps the Cains from falling apart. He literally proves that in a very funny bit with a pumpkin in the beginning of the play. Not much of a success financially, he is nevertheless a success at the things that matter and, although they rebel on occasion, he has the love of his sons. Mary is a different story. Her love is fierce, but concealed. A martinet who demands the best of everyone around her, she never gives hugs or kisses. Yet she is unfailingly kind to those outside the family circle. She is both the salt and pepper in this domestic stew.

Blakely and Marks take on a variety of smaller roles. They are doctors, with the donning of white coats, physical therapists, even women — Mary’s hairdresser and best friend. The device mostly works but can be jarring. The production would benefit from a few more people to play the less significant characters, expensive as that might be. The set, by Scott Bradley, is a marvelous backdrop dominated by a stained-glass window, with chandeliers and revolving crystals before and behind. The action, however, takes place around a few plain wooden pieces of furniture. Alexander V. Nichols’ lighting is, as always, just right. Callie Floor did the costumes.

Bill, the narrator, states his belief that “all writing is a prayer.” If so, Bill the playwright, has voiced a touching memorial prayer for his parents, more heartfelt than any to be found in any liturgy. His “Bible” may not be an orthodox one, but it’s easy to read.