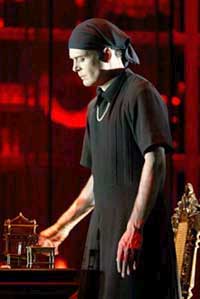 Homosexuality remains controversial well over three decades after it became widely politicized at the Stonewall Riots of 1969. Gender issues, a wholly different set of variables, have, in large measure, followed the gay issue into the limelight, but more recently and more gingerly and with a good deal less understanding and acceptance on the part of the general public. Spanning a range from transvestitism to transsexuality, transgender people make up a smaller percentage of the population and are dealing with fundamental issues of identity that reach more deeply than sexual acts alone. For all the gender ambivalence embraced by contemporary fashion advertising, most mainstream folks remain mystified, suspicious, even threatened by the idea of men or women who cross-dress, no less men or women who embrace modern medical techniques for physically changing their sex.

In that context, the story of transvestite Charlotte von Mahlsdorf, born Lothar Berfelde (1928-2000), a German biological male who dressed as a woman and survived both the Nazis and the Communists in East Germany, is at once both exotic (and perhaps to the uninitiated, titillating) and inspiring–being different is hard enough in democracies; in fascist states survival becomes a matter of wit, courage, and determination.

Playwright/screenwriter Doug Wright (Quills, Unwrap Your Candy) met with and interviewed von Mahlsdorf over a period of months between 1992 and 1994. His one-person play, I Am My Own Wife, is a lightly fictionalized retelling of von Mahlsdorf’s life that utilizes material from those interviews as well as letters and the public record. Interpreted in a remarkable performance by Jefferson Mays, I Am My Own Wife immortalizes von Mahlsdorf without idealizing her; she emerges a fascinating character, a survivor who did what she thought she had to do to make it through some of the darkest, most repressive times in modern history.

Von Mahlsdorf was a collector of all the varied forms of early phonographs and music of the time, as well as the furniture of a period in which all too many of the tangible artifacts of a way of life were disappearing. In the play she acts in part as a tour guide, showing through the clever use of miniatures the items she lovingly preserved. She never restored, only preserved, since she believed the scars of age and usage told more fully the history behind the material evidence.

The daughter of a wife-beating Nazi, she had a Prussian aunt who dressed as a man and told her, "Nature has played a trick on us." Her aunt introduced her to the important work of Magnus Hirschfeld, the physician who pioneered the study of sexuality in the early 20th century, and in which she read that transvestitism was a "common, utterly natural phenomenon." Since her sexuality was directed at women, von Mahlsdorf considered herself to be a lesbian.

The play follows the biographical thread of von Mahlsdorf’s story, offering a wealth of factual information as well as the more subtle shadings of values and attitudes that shaped her and those around her. The writing is fully deserving of the 2004 Pulitzer Prize for Drama that it garnered, structuring a vast amount of material into a cogent, literate, dramatically effective piece of theater. Jefferson Mays, who won a Tony for this performance, seamlessly segues from Charlotte’s somewhat reedy German accent to a variety of other accents and voices as the script briefly introduces some three dozen other key characters. Under the direction of Moises Kaufman (Gross Indecency: The Trial of Oscar Wilde, The Laramie Project), it is a tour de force performance, but not a gimmicky one–versatile, subtle, and utterly winning.

In presenting a transvestite as a fully-developed character–charming, intelligent, imperfect–I Am My Own Wife is an essentially subversive work, one that refuses to fall back on stereotype or simplification, but forces the viewer to deal with a three-dimensional, real person who happened to be different. The differences are not underplayed, but nor do they subsume the common humanity that subject and viewer share.