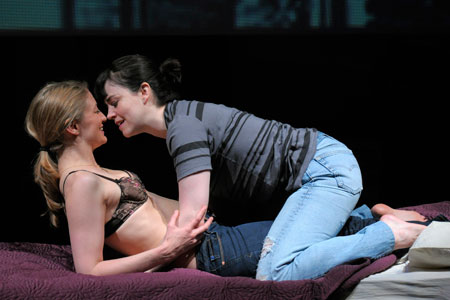 Heidi Schreck (left) and Emily Donahoe in Berkeley Rep’s production of “In the Wake.”
Photo courtesy of kevinberne.com

There are so many ideas floating around in “In the Wake,” an exciting new play by Lisa Kron (“Well”), that it’s rather like being in a room full of butterflies. You may not be able to catch them all in your net but it sure is a heady experience. Kron combines systems theory (a world-view that regards things and events not in isolation, but in their relationship to other things and events) and an examination of U.S. policy from 9/11 on in her story of one woman and her extended family. It sounds confusing but onstage it is crystal clear, partly because Kron is an exceptionally good playwright and partly because this splendid production is perfectly cast and deftly designed.

Ellen (Heidi Schreck) is, by her own admission, “the golden girl.” She likes her work; has a great boyfriend, Danny (Carson Elrod) and some really good friends, including Danny’s sister Kayla (Andrea Frankle) and her lesbian partner Laurie (Danielle Skraastad), who live downstairs. As the play opens, the four are preparing a Thanksgiving dinner. Another of Ellen’s friends, Judy (Deirdre O’Connell) a morose, chain-smoking older woman who works in a Guinean refugee camp and is passing through on the way to her mother’s funeral, also is present and stands in stark contrast to this fun-loving group. The TV is on and the Florida recount of the Bush-Gore contest is the center of the conversation. Ellen and Kayla are passionate and outspoken liberals. Laurie doesn’t seem to care and Danny looks on in amusement. Judy keeps climbing out onto the fire escape to smoke. Believe it or not, this is all rather funny – Kron keeps the laughs coming – and sets us up for the more serious stuff to follow.

Because serious stuff – in addition to the news briefs that periodically flash onto the proscenium (lighting by Alexander V. Nichols) – does come. It comes in the form of Amy (Emily Donahoe), an old school acquaintance with whom Ellen begins a torrid affair while the incredibly patient and eminently decent Danny waits for it all to play out. And it comes with Tessa (Miriam F. Glover), Judy’s niece, a mixed-race middle schooler who has fled home to her taciturn aunt, only to find the same rejection at her exclusive urban private school as she found back in the sticks. And it comes when Kayla and Laurie re-examine their priorities and Danny forces Ellen to choose between lovers. Every single member of this excellent ensemble will get their moment in the spotlight and every one takes full advantage of it.

Kron uses the somewhat tired device of breaking the fourth wall now and again as Ellen addresses the audience on how she really is feeling about the progress of her life. But, in the end, the soliloquies work to the play’s advantage. Ellen believes in change – or so she says – but, when change overwhelms her, the golden girl begins to lose her glow. If our country’s leaders had a blind spot when they rushed us into a war, so did Ellen when she thought her charmed life would go on forever. And, she tells us, “The thing about a blind spot is, you can’t see it.” Kron shows us some of those blind spots and the damage that people can leave in the “Wake” of the title. And, in doing so, she opens up our own eyes.