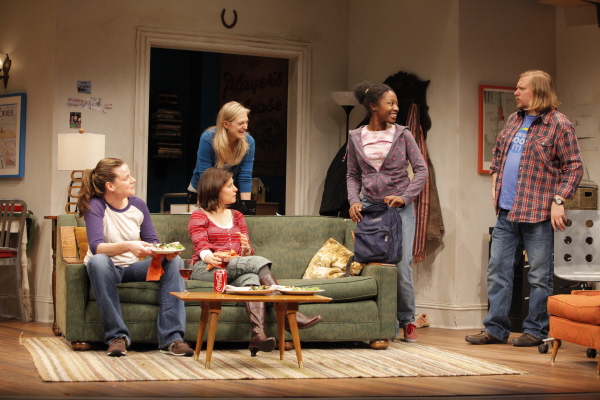 Oscar Eustis, artistic director of the Public Theater, has programmed a doozy of an election-year season. On the heels of “Bloody Bloody Andrew Jackson,” which moved to Broadway after a three-month sold-out run at the Public, now there’s Lisa Kron’s “In the Wake,” another play with an ambiguously likeable leading character and a serious take on the nature of democracy in America. In contrast to Alex Timbers’ rowdy rock musical, Kron’s play is a five-act comic drama, the kind of thing George Bernard Shaw might have written if he were an East Village lesbian playwright in the early 21st century. As my colleague Suzanne Weiss noted when she reviewed the play at the Berkeley Repertory Theatre (with a somewhat different cast) earlier this year, it’s stuffed with so many ideas about so many subjects that you can’t believe the author can pull it off, and yet she does, with the help of an able cast smartly directed by Leigh Silverman.

It helps that Kron situates her play in the midst of hyperarticulate characters who feast on ideas, starting with Ellen, a writer and political junkie (played by Marin Ireland) who opens the show with a howl of outrage: “I cannot believe the ruthlessness of the Republicans!” It’s Thanksgiving 2000, and the as-yet unsettled presidential race between Gore and Bush clouds the dinner party assembling in Ellen’s living room: her schoolteacher boyfriend, Danny (Michael Chernus), his sister Kayla (Susan Pourfar) and her wife, Laurie (Danielle Skraastad), who live downstairs, and Ellen’s old friend Judy (Deidre O’Connell), an older woman who does humanitarian relief work in Africa and is on her way to her mother’s funeral in Kentucky.

You may think you know what’s going to come out of these characters’ mouths as they hurtle through Bush’s inauguration, 9/11, the invasion of Iraq, and W’s re-election. Trust me— you don’t. Kron spares us generic characters spouting pre-digested social commentary safely distributed along the political spectrum. Ellen knows that her fixation on infrastructure makes her friends’ eyes roll back in their heads, but it doesn’t stop her from explaining how changes in the tax code led to the proliferation of strip malls over post-conference chitchat with Amy (Jenny Bacon), a childhood friend turned experimental filmmaker. Judy may know everything there is to know about how refugees from Sierra Leone wound up in Guinea but she’s so self-righteous about it that the lesbians downstairs dread the sight of her. “Judy’s a total freaking buzzkill,” Laurie says to Ellen. “You just talk too much.” And Judy’s 14-year-old niece (Miriam F. Glover), whom she’s rescued from a wife-beating stepfather, refuses to think of herself as black— “I’m mixed,” she insists, “my mother is white”— but after a couple of weeks at a private school in Washington, D.C., she’s learned to keep her red-state opinions to herself.

I’m impressed that Kron managed to write a play that captures the density and specificity of conversation among politically alert thirtysomething Manhattanites that is not exclusively a diatribe against the Power That Be or the Republican Assholes. The five acts (played with one intermission) are framed with speeches delivered by Ellen in the present that revolve around the concept of “blind spot.” Ellen knows she’s got one, she doesn’t know what it is, she applies a lot of intelligence and self-honesty in pursuit of that knowledge, and she still never quite arrives. She does a lot of talking and not enough listening. She allows herself to drift into an affair with Amy that tests her relationship with Danny and infuriates Kayla and Laurie. “You don’t have to choose me,” Danny tells her. “But you have to choose… You want everything. That’s not choosing.” Ellen is both a specific character and she is also, let’s say, Us, the kind of people who go to see smart Off-Broadway plays and consider ourselves politically progressive. If we’re distressed about the state of American politics, what’s our blind spot? What are we missing?

There’s a level of humility and intelligence, dismay and self-questioning to “In the Wake” reminiscent of Tony Kushner’s “Angels in America,” currently in revival across town at the Signature Theater. In one powerful scene near the end of the play, Ellen, who proclaims that the genius of the American democratic system is that it’s set up to allow for change, is shocked to learn that Judy has not bothered to vote in 2004. She pries out of her older and crustier friend a perspective that never gets aired during election coverage on National Public Radio. “I don’t want to participate in a system I don’t believe in,” Judy tells Ellen. “Voting is a false exercise. You know this. You’re the one who talks about how the system is skewed so that the votes in rich, white Republican districts are counted at much higher levels… The apparatus is working as it’s meant to work, to facilitate the self interests of wealthy men in power… The people at the top are the same people who’ve always been at the top. And the people who are at the bottom are the same people who’ve always been at the bottom… Because you’re a middle-class person and you are served well by the system, so you have to believe that change is possible. It’s what American liberals do. Because what could you do otherwise? You’d have to give up your middle-class life or your ideals.”

Having a character as complicated as Ellen at the center of the play is a bold and risky strategy. I admire Kron’s willingness to let the character slide back and forth in the audience’s affections. Because she’s the main character, we’re automatically on her side at the beginning, but then we notice her flaws, we watch her make some questionable choices, we start to dislike her, and we end up in a gray area, having to look hard at another human being as a reflection of ourselves and our own imperfections. I must admit that I did get tired of Marin Ireland’s performance sooner than I might have with another actor in this admittedly difficult role. Ireland is a brave and talented performer with some vocal limitations that made it hard for me sometimes to buy her as the person of substance Ellen is supposed to be.

No such reservations about any other members of the cast. The refreshingly non-actor-looking Michael Chernus gives a remarkable performance as a big cheerful lug of a straight guy who can stretch and stretch and stretch to be accommodating to the women around him but whose patience isn’t infinite. Deidre O’Connell is both entertaining and recognizable as Judy, her crustiness providing a respite from the perky energy of the younger crowd. And the other four actors succeed in conveying what’s not said just as well as what they do say, which is a lot in this long, talky but never boring play.