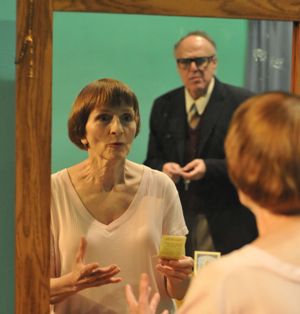 At a certain age it is easy to find oneself thinking about loves lost and roads not taken.Usually the daydreams are through a Vaseline-covered lens. The inamorata or inamorato appears, like Dorian Gray, ageless. On the other hand, the viewer, if he or she is honest, is following something closer to the ripening of Dorian’s portrait.

Lou Perino (Richard Fancy) is a man in his 70s, dying of lung cancer and wracked with guilt over how, when as young man on his way to the Korean War, he treated his best friend and secret love, Julia Spinelli. (Marley McClean plays a cameo of the young Julia; Roses Prichard is the mature Julia.) In 1951 Lou and Julia had one of those fights that makes it easier to leave someone, but this fight went too far and culminated in rape. Lou’s shame is such that for 50 years he could not return to his hometown, McKeesport, Pa. While Lou pined, wounded Julia still yearned for him.

Now a widower with a prognosis of six months to live, Lou returns to McKeesport determined to see Julia one more time and say he is sorry.When they were young they both worked at the candy counter in a five and dime, Murphy’s, which is about to be torn down . Lou stumbles into the decrepit coffee shop across from the store. Steve (Keith Stevenson), a sloppy, number-running young man, manages the shop. He turns out to be Julia’s son and no fan of what he has heard about Lou.

Frank Malgado (Haskell Vaughn Anderson III), a black man without a mean bone in his body despite whatever ills life has dealt him, bursts into the shop to celebrate the tearing down of Murphy’s. He, too, had worked at the five and dime “back in the day.” As soon as the connection is made, Frank embraces the none too loveable Lou and tries to make peace between him and resentful Steve.

Steve, despite his questionable lifestyle, has been a devoted son. Regretfully, he has moved Julia to a nursing home. She has full-blown Alzheimer’s and there is no way, no how, he is going to let Lou see her or try to make his peace with her. Steve sees Lou’s visit as more about Lou than about Julia. One also suspects he would rather that Lou keep the glowing but dim memory unsullied. Ultimately all three do make the visit. Frank, ever the peacemaker has made it happen. No surprise, Julia does not recognize her son Steve, let alone Lou. Gentle Frank is the only one she connects with, although one senses it is for his warm and gentle spirit, not their shared past.

This is a story for a select audience. Playwright Vince Melocchi has tapped into the essence of the disease; it is hard not to think that he has had firsthand experience caring for someone whose body remains but whose memory and personality have flown. He also has a finely tuned ear for the language of this working-class, rough-on-the-edges community, although the first act seemed more like a work in progress.

It was not until the second act that I found “Julia” compelling. Perhaps because Roses Prichard gives a wonderful performance as the feisty but vacant Julia. Seemingly fragile she strikes out with convincing force and a compelling mix of fear and deluded self-assurance. Lou is ready to flee and Steve would be happy to have him gone, but Frank, ever the peacemaker, does not let Lou go. He instructs Lou to “be in the moment” with Julia then leaves helpless Lou to figure it out alone in the room with Julia. Only late in the scene is it clear that Frank, too, loved Julia but could not act upon it as a black man in the 1950s. Anderson’s subtly nuanced performance slowly demonstrates Frank’s own unexpressed love as he shows Lou what he means by this instruction.

Does learning to be gentle with the Julia of the present tense and getting to hold her at the dance in the nursing home’s common room (whether or not she knows who is holding her) constitute living happily ever after? Maybe so, if “ever after” is six months at best. I generally do not want my theater through that Vaseline-covered lens, but in this case, Melocchi has taken so long for me to want to focus on his characters that I think I will go back to my own handsome Dorians in the original Kodachrome.