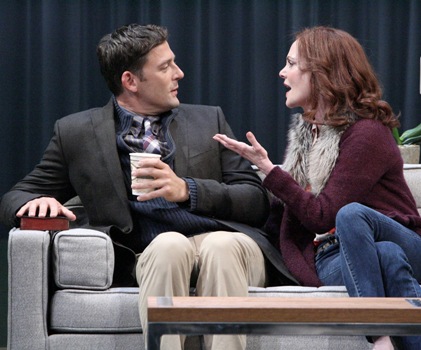 It is a good thing I did not write this review at intermission (not that I ever would), but as a thought exercise, let us just imagine I had. I would have been very hard on Geoffrey Nauffts’ “Next Fall” for treating some of life’s heavy-duty issues as brittle sitcom fodder, a compendium of cynical quips that would go better with a laugh track and likely forgotten by morning. By the end of Act II, however, it is hard to imagine there being a totally dry eye in the house.

Set designer Wilson Chin has created an off-center hospital waiting room that looks lstraight out of a David Hockney painting; with minimal changes it morphs well into apartments for multiple flashback scenes and other locations. It emerges that Luke (James Wolk) is in surgery for a serious head injury. A Bible-clutching friend, Brandon (Ken Barnett), and Holly (Betsy Brandt), the owner of the candle shop in which Luke works, are making nervous small talk, soon to be joined by Butch, Luke’s father (Jeff Fahey). Luke’s mother (Lesley Ann Warren), long divorced from Butch, takes over the stage borne on an inane whirlwind of her own creation. Last to arrive is Adam (playwright Geoffrey Nauffts), Luke’s openly gay partner. No two flavors in this entourage seem to mix. Luke’s parents are Southern, Christian, Bible-belt fanatics, and so, apparently, is Luke. Adam is an atheistic, edgy, cryptic New Yorker.

Through the series of sequential flashbacks we learn how the unlikely pair, Luke and Adam, met, moved in together, and lived an embattled five years in perfect disharmony. Luke, younger, energetic, dashing, charming, and thoroughly decent, shares his parent’s beliefs that gay sex is a sin. With no apparent difficulty he prays for forgiveness after sex, thus justifying his own lifestyle and gaining peace of mind with his upbringing; he proclaims the prayers insure his access to heaven. The older, more intellectual, self-centered, hypochondriacal, and not very likeable Adam needles Luke incessantly. Adam confronts him with gems to point out the inconsistencies in Luke’s theological reasoning. For example, Adam asks if praying to Jesus for forgiveness would allow Jeffry Dahmer or the killers of Matthew Shepard to go on killing gay men were they to ask forgiveness after each act. Constantly beset with diatribes such as these, Luke fears that his lover will not gain entrance to heaven, meaning they will be separated for eternity. For Adam, heaven is a delusion. As far as the flashback scenes are concerned, Luke’s unwillingness to come out to his parents and the gulf between his and Adam’s philosophies on religion appear to make up the core of their relationship. It is hard to see their attraction extending to a second date.

Luke’s parents wear emotional blindfolds to avoid confronting the reality of the men’s relationship, a reality that is palpable both in the flashbacks and the hospital waiting room. Holly, a lapsed Catholic perpetually in search of meaning and harmony, frequenter of self-help groups, Ashrams, and Yoga studios, tries to bring logic and reason to the disparate but doctrinaire flock. With no spark of chemistry demonstrated between Luke and Adam, their relationship is a contrivance to stage a pseudo-intellectual debate over religion and gender preference. Or, yawn, such is my impression at intermission.

Fortunately, for the sake of drama and the audience, there is an Act II. Luke’s condition has deteriorated and is hopeless. Once again Holly, the wise soul who understands multiple points of view, voices an anguish anyone who has experienced it can appreciate: in the face of a hopeless situation, in a world where a semblance of life can be medically extended without regard to quality, when does one tell the omnipotent doctors, enough is enough? It is one thing to be sure of one’s own beliefs in the abstract. In reality it is a terrible decision to have to make. Finally, as the characters have to come to terms with losing Luke, they take on human proportions. In the face of the tragedy. one senses true but anguished forgiveness beginning to emerge in the here and now.

“Next Fall” garnered considerable praise in New York, moving from Off-Broadway to Broadway and snatching a Best Director Tony nomination for Sheryl Kaller en passant. Keller directed the Geffen production, but the cast has changed completely. Perhaps therein lies the Act I problem. In the Naked Angel production in New York, playwright Nauffts wanted to act the part of Adam, but was discouraged from doing so. At the Geffen, he is Adam and ironically, for much of the play, he is not terribly convincing. As beautifully staged as “Next Fall” is, Kaller does not seem to have control over Nauffts or Warren. For her part, Warren’s chatterbox, first-act performance as a burned out, ex-hippie, Southern Belle cum super sexy older woman is so far beyond reality it lacks credibility.

Act II packs a powerful punch. The clever quips are still there, but the content is meatier, caricatures become characters, and “Next Fall” becomes a serious exploration of multiple issues. It morphs from sitcom to drama. Now, if only something could be done about Act I …