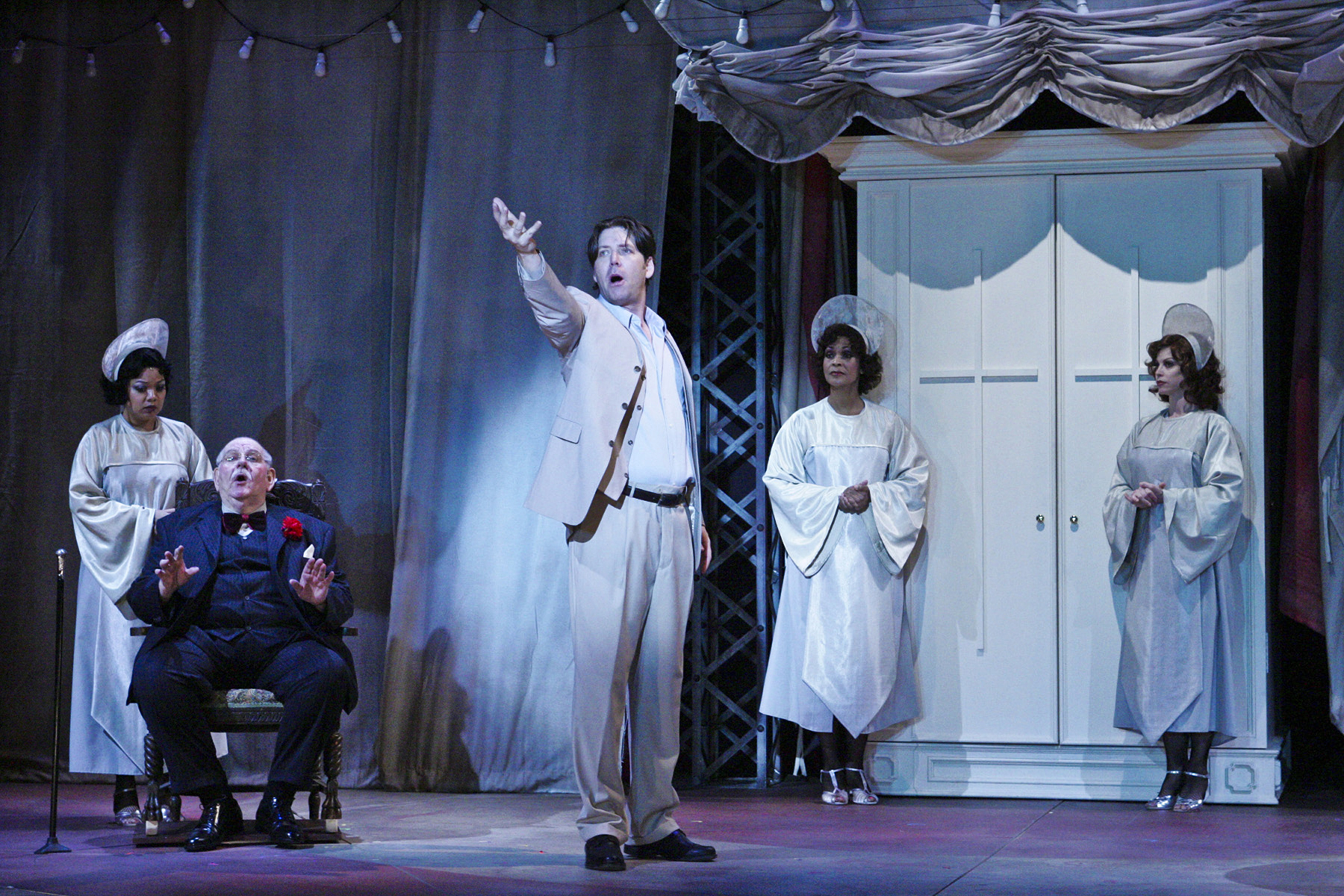 What goes through your mind when you think of carnival life?  Kind of gritty?  In your face?  Hucksters and con men?  Probably.  “Nightmare Alley,” the new musical at the Geffen, with its ads touting “Geeks, Freaks, Lovers and Fools,” promises all.  But only the hucksters and con men ring true.

Psychic Zeena (Mary Gordon Murray) opens  with a toe-tapping number.  Yes, her costume is not tawdry enough to convince.  However, the music has a vaguely Sondheim feel, and with Murray’s own experience on and off Broadway playing Sondheim and other musical fare, expectations are justifiably raised.  Both she and James Barbour, well cast as a handsome con man, bring panache to the stage.  He has a big Broadway voice and a convincing way about himself.  Michael McCarthy as the carnival host, and again as the wealthy benefactor, is amusing and comes the closest to realizing a true carnival spirit.  Unfortunately, after over two hours, there is only so much a good cast and terrific musicians can do with music and a script that are derivative at best.

Then there is the set.  All encompassing, the theater itself is strung with lights appropriate to the Depression-era setting.  However, rather than projecting a weary carnival, the stage is draped with curtains and backdrops that look as though the paint has only recently dried. And, while I am at it, most of the costumes are just too fresh to provide an air of back-alley grit, as is the lovely Sarah Glendening, who plays a young but experienced ‘carny’ girl and is the love interest for Barbour’s Stan. Where are the geeks and freaks?  Except for two quick shadow projections of a geek, everyone onstage looked quite normal.  Life in this carnival is just too clean and cute.  This is particularly true as it concerns the four “Tarot Ladies” who periodically trot across the stage in varying sketchy costumes and function as a high school-level impression of a Greek Chorus.

I tried hard to like “Nightmare Alley.”  I am a sucker for Sondheim, have loved every iteration I have seen of “A Chorus Line,” and grew up imagining myself dancing in “Guys and Dolls” or “Pajama Game.” I am not a snob about musicals, but try as I might I could not light a fire for “Nightmare Alley.”  The only tune or lyric to stick in my head was the grinding refrain, “Nightmare Alley.” That is good design in a commercial, but does not say much about a full-length musical.  My feet trudged to the car, uninspired by the simplistic choreography that could have been executed by a troupe from your local senior center.  It is a pity; so much talent and stagecraft, such poorly conceived material.  Derivatives may have fooled some for a while on Wall Street, but a derivative musical is a problem not even waiting to happen.