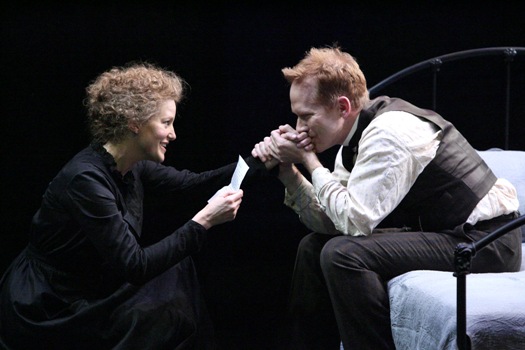 ‘Radiance: The Passion of Marie Curie’

For a mere mortal, Alan Alda has rare insight into the rarefied world of theoretical mathematicians and physicists. When working on a challenge, they burn with a single focus intensity hard for the rest of us to comprehend. As the mother of a theoretical mathematician/physicist, I claim some insight into the intensity, though not into the substance, of that world. Alda can claim some of that expertise, too. His fascination with science led him to 11 years of interviews with scientists for the PBS series “Scientific American Frontiers.” Currently he is a visiting professor at Stony Brook’s Center for Communicating Science, and he has recently contributed to a large outreach science program run by the Canadian Perimeter Institute for Theoretical Physics.

“Radiance” is a play about science and scientists, but it is as much a work about the uphill road women in science have had to travel and, to some extent, still travel. Though nowadays that slope is not quite so steep. Feminism has long been another of Alda’s concerns. Marie Curie (Anna Gunn) was one of its pioneers. She was the first woman to be awarded a Nobel Prize.

The question is, does all this sincerity add up to good drama? Certainly, for a playwright to attempt a subject as serious as depicting the most productive portion of the life of a two-time Nobel laureate (and the first woman) it is necessary. But is it sufficient to engage an audience? Well, yes and no. Keep in mind, Marie Curie is one of only two people who have received Nobels in twp separate fields (Linus Pauling is the other).

Curie fled her native Poland to Paris because the occupying Russians would not allow a girl to go beyond high school. One of her professors at the Sorbonne was Pierre Curie (John de Lancie). They met; they were as passionate about science as they were about each other; they married. Student /teacher fraternization was not the issue then that it is now. Theirs was a heady world, including such notables as physicist Paul Langevin (Dan Donohue) and the older mathematician, Émile Borel (Hugo Armstrong). Each accepted her brilliance without question. It was a man’s world whose entrance she earned by her outstanding research. In Alda’s retelling it was a quick-witted world as well as a world charged with intensity.

Currie was so excited by her work in radioactivity that, for a while, Pierre put aside his own work on magnetism to collaborate with her. In “Radiance,” largely set in their Paris laboratory, the sparks of their shared passions fly, peppered with the quotidian. How closely does Alda’s view adhere to reality? Hard to say. The fevered scientific dialogue rings true; the kissing punctuating their work? Not so much.

In contemporary observations she was typically described as dour. Was the Marie we see on stage the real person and her reputation a product of societal disdain for a woman scientist? Or, has Alda taken liberties because, with his research in to her life, he too has fallen in love with her mind? Albert Einstein described her as “cold as a herring.” He also vaunted Curie’s brilliance, “of all celebrated beings [she is] the only one whom fame has not corrupted.” In “Radiance” we do not see the herring. We do see the determination that drove her to discovery. So too do we see the ardent feminism propelling her to be certain her name was rightly linked to her monumental discoveries. That is the reason we know her name today. It is now believed by many that Einstein’s first wife, Mileva Marić, was an important part of the groundbreaking special theory of relativity in 1905; history only identifies Mr. Einstein. Who knows for certain? Her contribution (if true) was not acknowledged.

Throughout “Radiance,” there are references to Marie Curie’s obsessive behavior; even she describes herself thus. Bits of her diary are read by her or other characters; they certainly make that characterization ring true. Scientific questions and everyday minutiae are recorded with equal weight. It is hardly the usual output of a romantic soul leading one to ask, was she really as much fun as she seemed in Act I? Or is that the voice of Alda, a witty and charming person?

Pierre was run over by a carriage and died. As a consequence she suffered over a year of devastating and unproductive depression. She was lifted from only it when she began an affair with Langevin. Langevin’s wife was not a scientist, and (pretty accurately) felt deprecated by her status as a non-scientist. She sensed her husband’s attraction even before anything happened between the two. She was vindictive. France was scandalized. Once again the shared passion was both personal and intellectual. In France, Curie fell from icon to outcast.

Sarah Zimmerman delivers an excellent performance as the embittered wife, Jeanne Langevin, but the chemistry that made the stage sizzle in Act I is not palpable between Curie and her new lover. While Gunn embodies Alda’s concept of Curie’s personality, Donohue’s Paul Langevin is less than convincing.

The story of Marie Curie is fascinating on many levels, but portraying science in art is an art itself. “Breaking the Code” by Hugh Witmore and “Proof” by David Auburn are two examples of plays that have successfully bridged the gap. The dilemma is how much information does a lay audience need to comprehend what is happening onstage? Tony-winning director Daniel Sullivan captures collaborative frenzy with the rapidly paced dialogue between the Curies. The cost is comprehension on the part of the audience.

Feminist issues are laid bare more successfully. But “Radiance,” despite its beautiful production, becomes bogged down in an attempt to balance the personal with the science. The message of Curie’s feminism is delivered better than the essence of her science. Personally I would prefer to read more about Marie Curie and her discoveries than to try to sift out what part of a fictionalized biography is fact, what part is poetic license. The science is shortchanged (and probably impossible to grasp for anyone with no prior knowledge) and the personal is dragged down by the science.