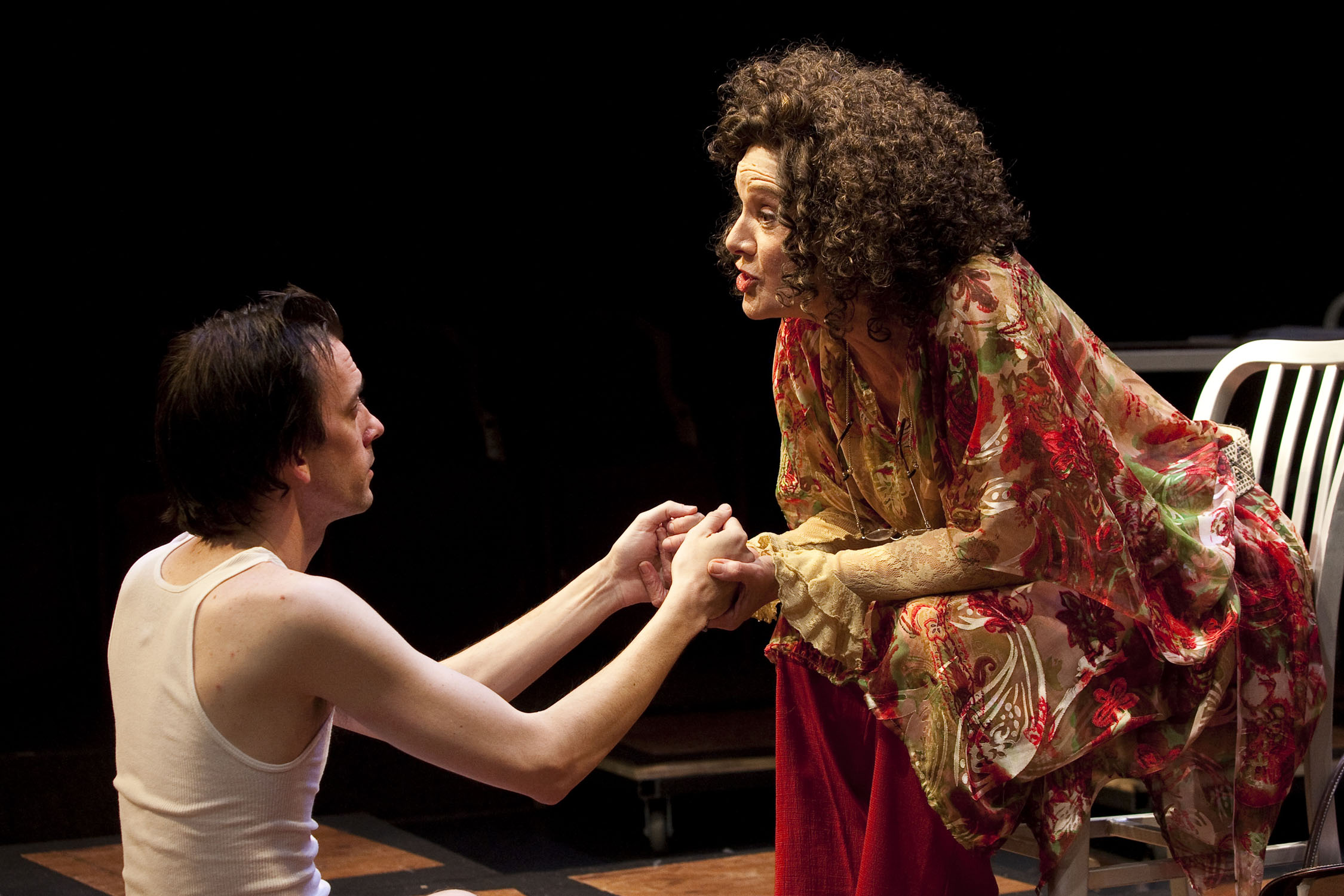 Stories about the culture wars usually make we weep. No single event in
Unites States history has affected my generation of art makers. Eric Coble’s
Southern Rapture, now playing at Stages Repertory Theatre, is first and
foremost a comedy. Face it, theater people who will go down for their
convictions and a bunch of uptight southern church people in the same room
can be funny.

Southern Rapture is based on the saga of the Charlotte Repertory
Theatre’s 1996 production of Tony Kushner’s Pulitzer price winning
epic, Angels in America. A seven second full frontal nude scene, crucial to the play’s
core, set off a firestorm of controversy that put their funding and future
in peril. A snarky local critic fueled the flames, inciting even more
trouble. The themes of Coble’s play are also especially timely in light of
recent southern-born silliness in the headlines.

The cast has a blast with this material. Sally Edmundson, as artisic
director Marjorie Winthrop, is spot-on. If ever there was an archetype of a
stubborn theater maven, Edmundson is it. Rutherford Cravens is terrific as
Mayor Winston Paxton, the guy that just wants all the fuss to just go away.
Unfortunately, the Mayor has an election coming up, so he needs to cave into
his base. Sounds oddly familiar. Cravens captures the man on an ideological
edge with a robust performance. Pamela Vogel inhabits each of her four
characters with equal gusto. She lends Allissa, the conflicted board member,
a subtle turn. Vogel pulls out her comedic chops as Laverne, the churchy
lady who objects to just about everything. Jon L. Egging gets to play on
both sides of the aisle as the Rev. Dubree and Mickey, the actor with the
scene in question. Egging steals the scene when he explains exactly why the
nude scene needs to be included as written. David Wald gives Donald Sherman,
Winthrop’s assistant director, an edgy quality. Wald lets us feel the edge
of your seat vibe of the brouhaha. Jovan Jackson is a hoot as the southern-
metaphor talking lawyer and a clueless actor.

Stages artistic director Kenn McLaughlin directs with an ear for the
comedy, in an unfussy production that stays focused on the characters and
their compelling narrative. (McLaughlin has weathered through a controversy
or two on his own stomping ground. I am still recovering from the talk back
trauma after Mr. Marmalade.)

Kirk Markley’s set consists of several interlocking platforms that produce
a wretched sound when yanked apart, which happens in the opening moments of
the play. Although the raised platforms create a bit of a hazard for the
actors, it’s an effective visual metaphor for the divisions of territory and
thought that play out during the course of Coble’s story. Chris Bakos’ sound
design works well in conjunction with Markley’s puzzle set. Listen up
people, if you ever wondered what an ideological divide sounds like, this is
it.

Back to weeping, there’s that too. In the play’s final moments, each
character sums up the experience. And we finally get to see the scene that
set the town on fire. In a low light, it’s played out with utmost dignity. I
had a little fantasy of some hard core religious Charlotte folk coming to
see this play and becoming transformed by the power of theater. Coble lets
us dwell in dreaming that such a thing is possible.